What The Hell Really Happened This Week: Seth Rich and Russia 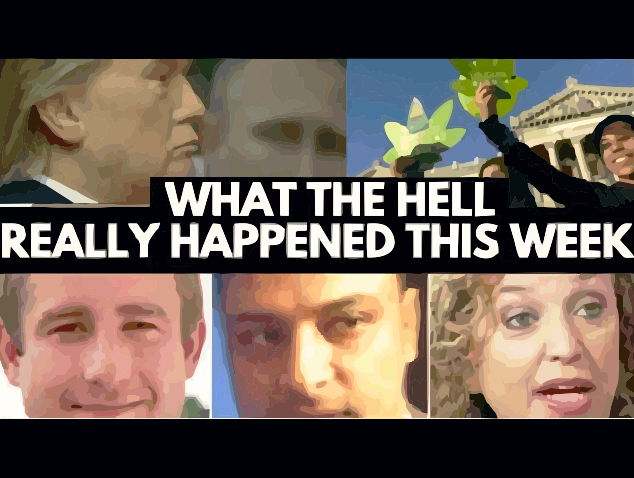 Welcome back all you spiritually awakened human beings. Sorry that I haven’t been around recently, life is like a roller coaster, recently things have been down, but life must go on.

Today we begin with Debbie Wasserman Schultz’s aide being arrested. The former DNC chair who resigned in disgrace when it was discovered that she colluded with Hillary Clinton against Bernie Sanders during the 2016 elections. Her former aide was arrested after being accused of bank fraud while trying to flee the country for Pakistan. 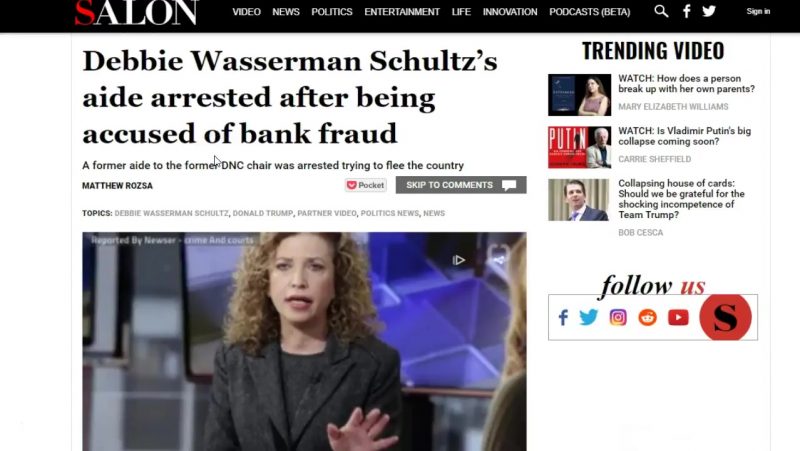 The Daily Caller is reporting that she even planned to continue paying her aide while he lived in Pakistan.

Imran Awan her aide may be connected to the death of Seth Rich. Seth Rich is believed to be the DNC leaker. Washington area detective Rod Wheeler told his Twitter followers that there might be connections to the unsolved Seth Rich Murder.

Mr. Awan’s arrest came just one day after reports that the FBI had seized numerous “smashed hard drives” and other computer equipment from Awan’s previous residence. Now where this case will go and what dot’s will be connected, we still have no idea. There is a lot of speculation around this case, let me know what you think.

Moving on to the most talked about news story this week. The one where Donald Trump stated that Transgender individuals could no longer serve in the military.

John McCain who previously had slammed Obama’s move to allow transgenders in the military has now flip-flopped and is slamming Trump’s transgender ban.

I am going to state something that is very controversial; it shouldn’t only be transgendered that aren’t allowed in the military but also homosexuals, heterosexuals, and even metrosexuals. No one should join the U.S. military.

I know way too many of my personal friends that were hurt not only physically but also mentally. They were lied to, cheated and screwed over by the U.S. military industrial complex. No one should be joining, and there shouldn’t be so many senseless wars out there. Don’t listen to me though. I’m just someone who spreads fake news, according to the mainstream media.

In other war related news, Donald Trump made a very important move that shocked the military community when he said that he would no longer support the “moderate” rebel groups. The U.S. will no longer arm or fund these groups inside of Syria. 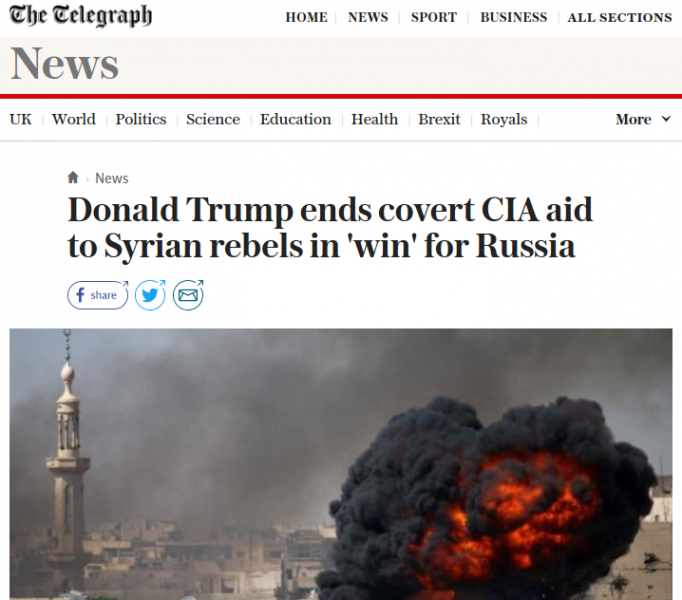 They claim they will only focus on ISIS. It looks like he is finally doing the right thing. It’s important to note that not only did the U.S. arm them, but they also paid them salaries through covert CIA programs. 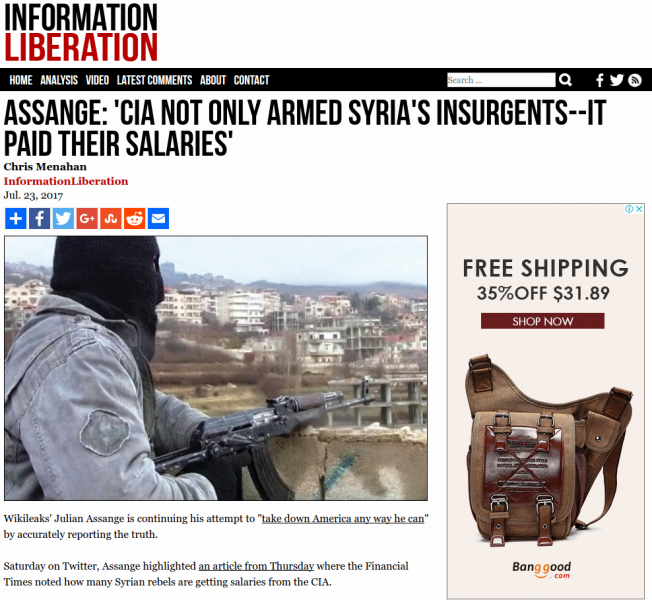 The mainstream media is now claiming that this is a win for Russia. You would think that not funding radical Islamic terrorists, the sworn enemies of the west, those that commit terrorist attacks, would be basic common sense. Now Trump is not perfect he still has ties to Saudi Arabia, but I see this as a move in the right direction.

ISIS appears to be on the ropes and loosing badly. They are facing total defeat and right after the United States stopped financing and arming them, what a surprise. 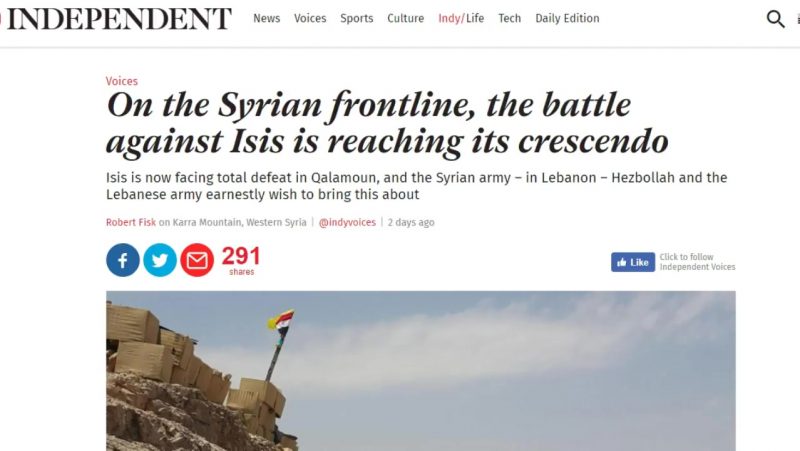 Great, we can finally co-operate with Russia, no more proxy wars between superpowers with nuclear weapons. Sorry, I was too optimistic, as Donald Trump is ready to sign a new Russia sanctions bill designed to punish them for meddling in the 2016 U.S. presidential elections. Russia is promising to respond if they pass this bill. 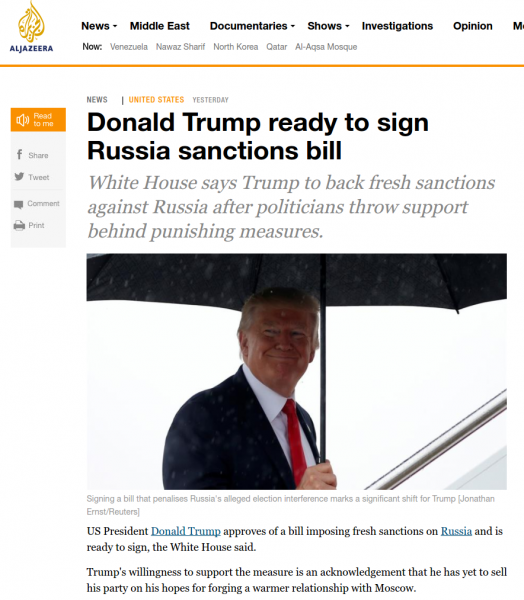 Now in mind blowing, what the hell is going on news, seemingly out of nowhere, Donald Trump is claiming that Russia conspired against him during the 2016 presidential campaign. 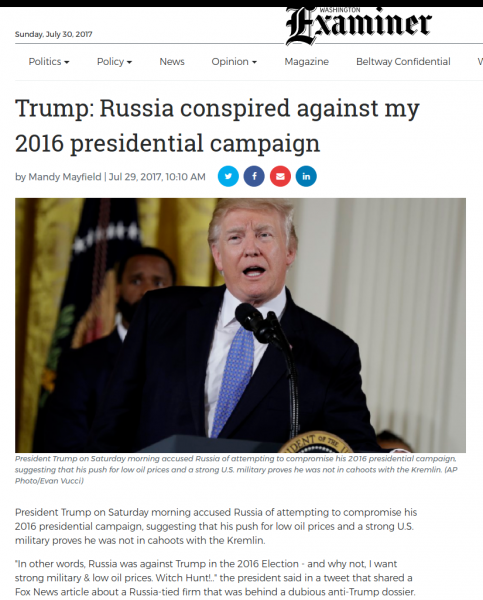 This is where it gets confusing, as is often the case with Donald Trumps moves. Whenever he takes one step forward, he takes one back, jumps sideways, left and right a few times. Confuses the crap out of everyone including myself, which may just be part of his strategy to keep everyone off balance, so they don’t know what he is doing.  He’s either a master at strategy or he doesn’t know what he is doing.

Russia has just signed a deal with Syria, to maintain an airbase and to pledge to stay there for the next half a century. China has also announced that it plans to invest $2 billion in rebuilding Syria. Obviously, they are seeking economic opportunities inside of Syria. 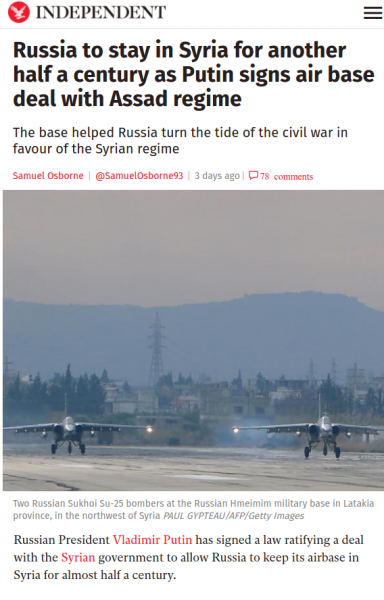 In other disastrous foreign policy news that are right on the doorsteps of China, we have North Korea. The U.S. has come out stating that they are prepared to use ‘overwhelming force’ in North Korea. This coming right after North Korea tested another ballistic missile, and the U.S. continues to rattle its sabers by flying two B-1 bombers over South Korea. The North Korean’s keep responding to Washington’s aggression with more aimless aggression.

Now let’s talk about how everyone is a complete slave on this planet and how the shackles of the corporate oligarchy are being tightened over virtually everything we do and online.

Attorney General Jeff Sessions is pushing for more civil forfeiture. Which means the police can just confiscate whatever you own. Something which they have used to rob people of their cars, property and even their homes. 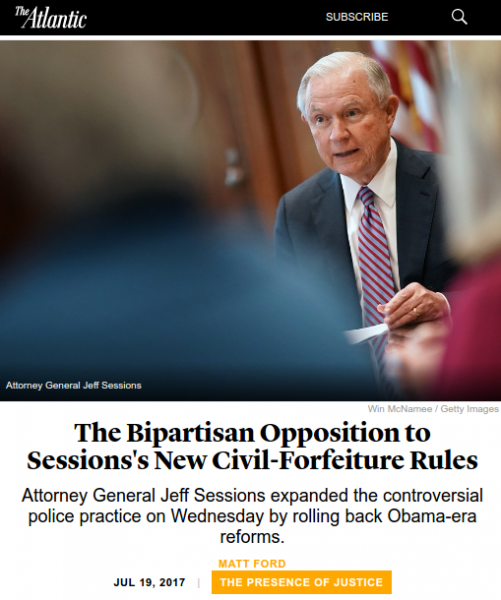 He wants all police departments to have this extraordinary power, which would let police take assets of anyone they deem suspicious or under legal scrutiny. So now that Jeff Sessions is under legal scrutiny, perhaps it’s time to start seizing his assets. Sadly, the law does not work that way. 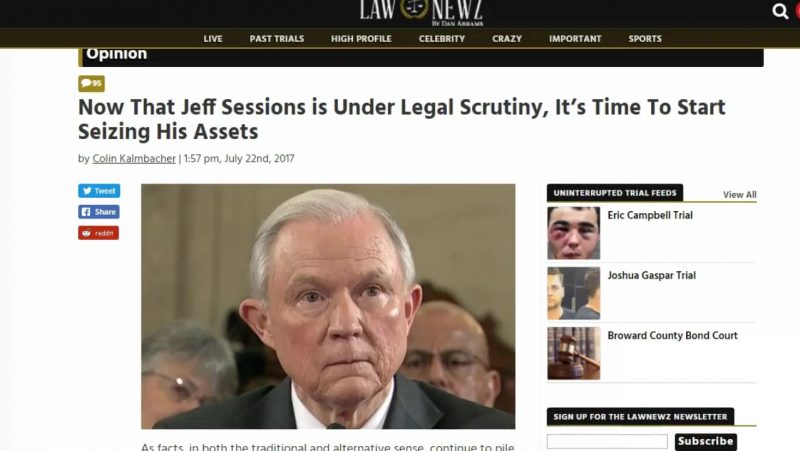 Honolulu has decided to make it illegal for people to look at their cell phones when crossing the street. You will get fined; this is for your own good since the government truly cares about you and does not see you as a tax slave, made to pay for their very existence. At some point I see the government giving out tickets for picking your nose since you might get a nosebleed. The government does not care about you; they just want you as another revenue source to finance their criminal organizations.

It’s not just bad here, it’s bad all over the world. Like in Turkey where the government has created a new Taxi service that doubles as a surveillance tool. They spy on you and will give that information to the government, who will probably imprison, torture or execute you. 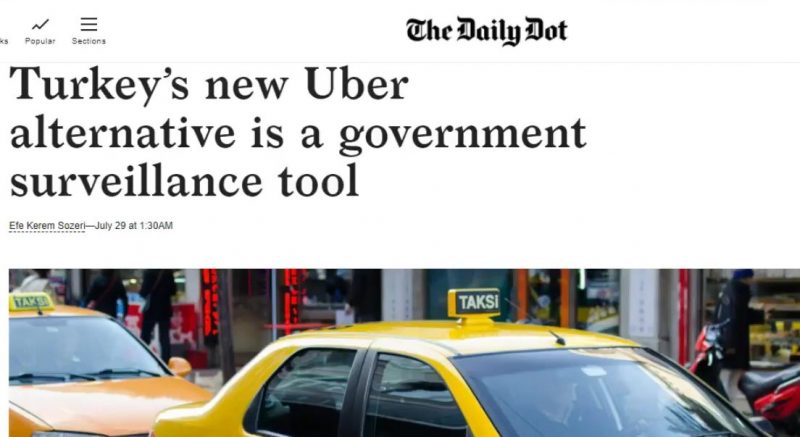 In more government execution news, China is now forcing their Muslim Minority to install spyware on their phones. That way they can see everything they are doing and also scan their devices for terrorist propaganda. Apple has removed an app that allowed Chinese users to get around censorship filters.

Russia is also considering banning the use of proxies and VPN’s. So that the good, caring government can see everything that you are doing through your IP address and you will have no way of masking your identity. Of course, they are only doing it for your safety.

Now finally some good news, Bolivia has declared ‘Total Independence’ from the World Bank and IMF. 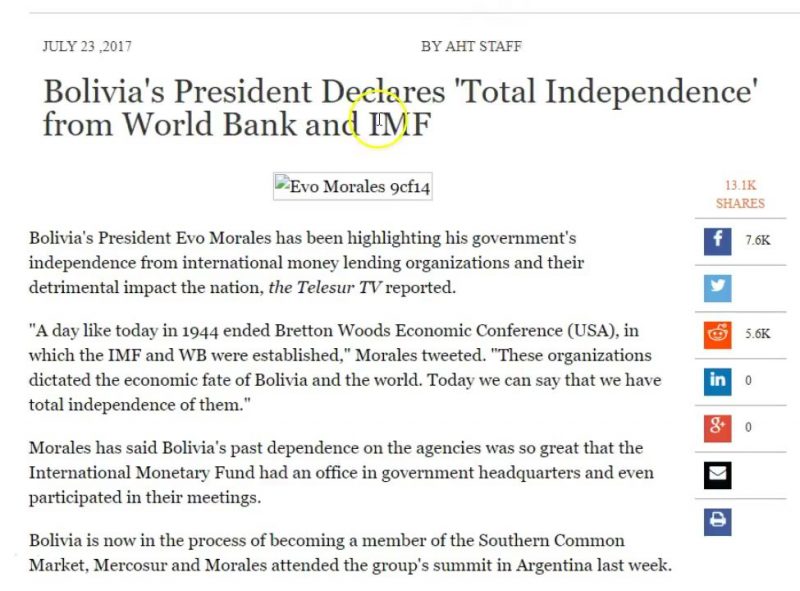 Uruguay has started selling marijuana directly from pharmacies, a move that will likely lower crime, reduce drug cartels and black markets. Overall this will likely improve life for those in Uraguay. I always like to end this news cast on a positive note. 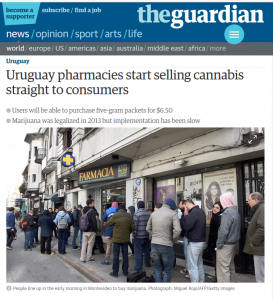 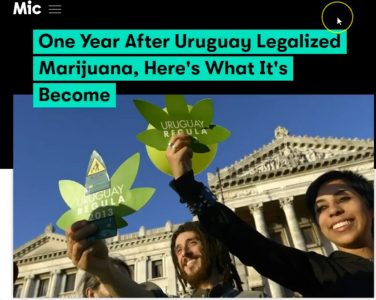 If you do appreciate us, please subscribe to our YouTube channel. We will have a lot more coming and please support us on Patreon. …. oh wait, Patreon has been caught removing accounts of users that they disagree with so please note that we have a backup at wearechange.com/donate