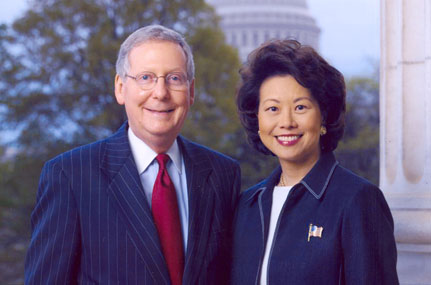 With Chao’s ties to various unsavory Washington insiders, this may be President-elect Trump’s most questionable choice so far for those that elected him to “Drain the Swamp.”

Chao’s family has given money to her now-husband Senator McConnell for years, making headlines when her family’s company, Foremost Maritime Corporation, was caught trafficking 90 pounds of cocaine on a ship it was operating, the Ping May.

According to World Net Daily, “one of Chao’s patrons has been Heritage Foundation donor Maurice ‘Hank’ Greenberg, a pro-China lobbyist whose insurance company does business with China. Greenberg is said to be Henry Kissinger’s ‘money bags.’ Kissinger has gotten rich in recent years as a paid consultant to U.S. companies seeking to do business with China.”

We Are Change‘s Luke Rudkowski has previously reported on Trump’s choice for deputy national security adviser, K.T. McFarland, and her ties to Kissinger.

The role of Secretary of Transportation could be hugely important under President Trump, considering his promise to spend $1 trillion on rebuilding U.S. infrastructure such as roads, bridges, and airports.

With her history in the D.C. “swamp” and a husband who was far from a supporter of Donald Trump during the Republican primaries, the question remains – what is President-elect Trump’s motivation in hiring Elaine Chao?