Trumps Pivot That Will Bring On The End Of The U.S. Empire 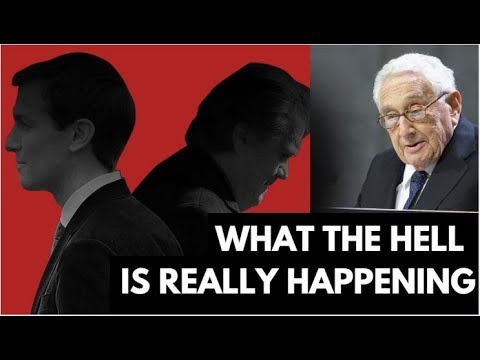 Welcome back beautiful and amazing human beings, here at WeAreChange we often confuse a lot of people. To pinpoint our philosophy, we are here to get you to question your reality so that you can make up your own mind.

We are a fully independent broadcast news organization that is financed by you. I needed to say that before getting into the next subject of this video which is a very light topic which is of course “The diabolical, evil plot by bloodthirsty globalists to start a war, with the help of the mainstream media!”

More concisely we are going to be talking about Trump’s Afghanistan plan, the internal battles between Kushner and Steve Bannon, and how Henry Kissinger’s recent comments support ISIS. A few days ago I tweeted: 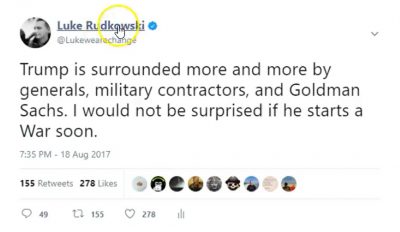 Some of the recent actions by the Trump administration show that this is increasingly likely. We’re getting alleged information that it was Ivanka Trunk and Jared Kushner is the reason that Donald Trump’s Chief Strategist Steve Bannon was removed from the White House. 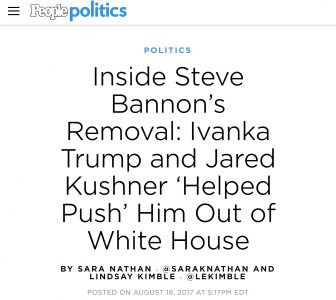 Now Mr. Kushner, Ivanka’s husband has been very instrumental in the White House. He has business ties to George Soros and Goldman Sachs. 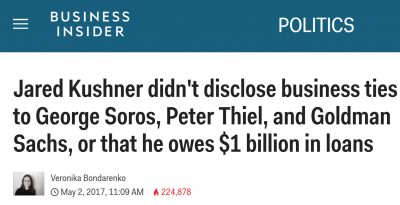 He is the one who called Lockheed Martin to get Saudi Arabia a better deal.

A few weeks ago it was this couple that got Trump to launch a military strike on the Syrian Government because “Ivanka watched a video of children suffering inside Syria.”

We hear that Steve Bannon called Jared Kushner a cuck and a globalist. 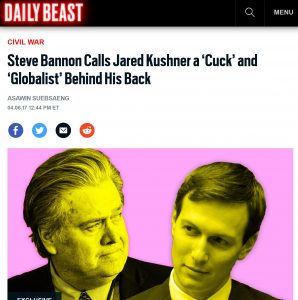 Even since his recent ouster, many analysts are saying this is a major win for the globalists. Finally, a lot more people are concerned about this globalist influence in Trump’s administration. This is something we have been talking about on this broadcast since the beginning of his presidency. 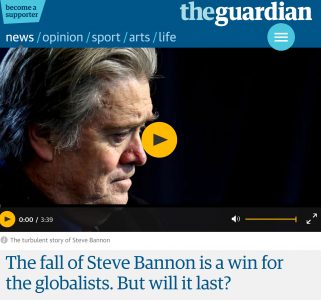 We are now seeing a more aggressive, more militarized, more war hawkish stance by this administration. Today they just slapped further sanctions on Chinese and Russian companies and individuals, supposedly so they will put pressure on North Korea.

These sanctions are a significant move one that is generally considered a form of economic warfare. The United States is more aggressive, stating that they need a Pre-emptive war on North Korea to stop a war. Which if you think about it doesn’t make any sense. 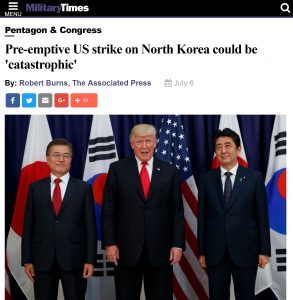 These latest developments show that the president does not represent the people of this country but a small number of individuals that are pulling the strings.

Donald Trump just made a major announcement about Afghanistan and what was his decision. Back in 2013, he agreed that we should withdraw from Afghanistan.

In 2011, he stated that we are wasting money in Iraq and Afghanistan, that Ron Paul is right.

and then he said

What did the man who said he wanted to be a non-interventionist, that promised to pull back the military troops, what did he do well, he totally flipped-flopped. 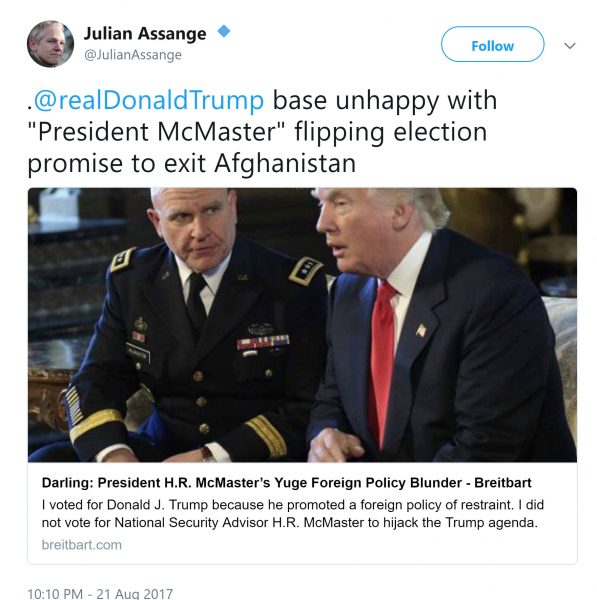 He just made the same excuses of his predecessor Barack Obama.

Trump has approved sending 4,000 additional troops to Afghanistan, and imagine my shock when he gave no timeline for withdrawal. 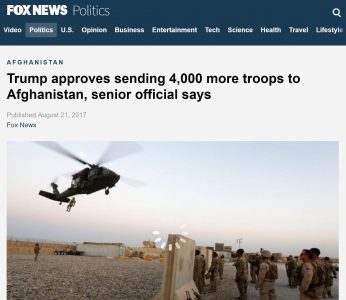 This is extremely frustrating as it makes almost no sense unless you look at what the media and government are not telling you. The United States has already spent over a trillion dollars in Afghanistan. 3600 Americans have been killed, and twenty thousand soldiers have been wounded. This occupation has been the longest conflict in the history of the United States now in its sixteenth year.

There are a number of reasons why we are in Afghanistan.  These include the Taliban who in 2000 managed to almost completely eliminate the worlds largest crop of opium and heroin production in under a year. 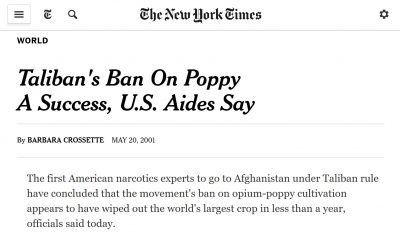 Ever since the United States took over the country, it has turned into a Narco State ruled jihadists and drug lords. 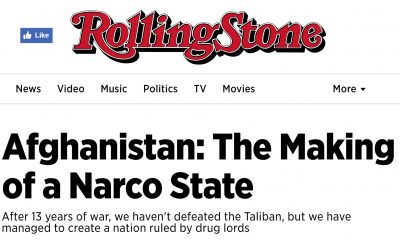 According to the United Nations, the war-torn nation provides 90 percent of the world’s supply of opium. You know one of the most addicting drugs in existence. 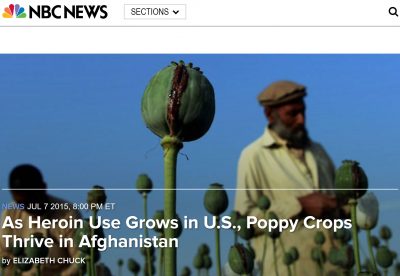 Afghanistan is also rich in natural resources rare metals that help run your computer and your cell phones. 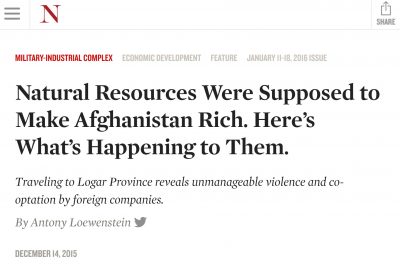 People like McMaster, Lindsey Graham, and John McCain are celebrating this announcement. Which is ultimately a continuation of the same policies of Bush and Obama. Even the mainstream media is cheering him on, congratulating him on his bold new action plan against Afghanistan. Which is really the same old plan we have had since 2001, and they say I’m the conspiracy theorist.

People need to realize Donald Trump has just shifted toward total Neo-Con, he is now doing the same policies that never change no matter who is president.

We all need to wake up to this and stop being naive. It’s not just drugs and natural resources that the United States is after but also global hegemony. A big part of the new deal to everyone has a lot to do with Iran. Since Israel and the U.S. have aligned themselves with Saudi Arabia. They are the one’s that fund the Wahhabists, the pushers of Islamic terrorists against Iran. Saudi Arabia and Iran control most of the oil in the Middle East.   They have been fighting each other through various proxy wars.

One reason to leave troops in Afganistan is to make sure that Iran doesn’t gain influence over Afghanistan. Iran has been fighting off drug lords on the border with Afghanistan where all that opium and heroin is produced. 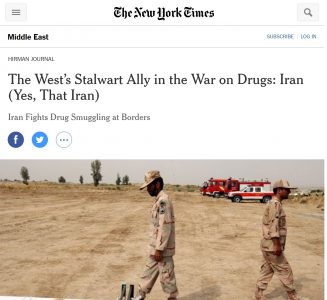 Henry Kissinger has come out saying that he would rather have ISIS than risk Iran becoming more influential in the Middle East. 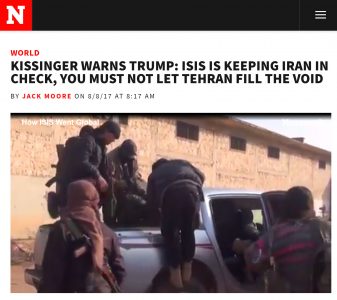 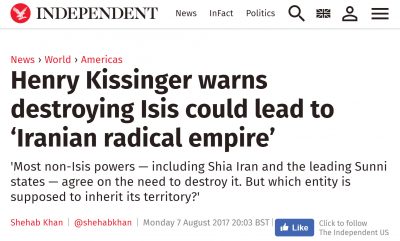 Kissinger is one of the most influential American foreign policy advisors and a major globalist who is tangled up with various secret societies within the establishment. He advises Donald Trump, and Donald says he respects Kissinger dearly and has regular meetings with him. He is recommending to Trump not to destroy ISIS as that could lead to a radical Iranian empire. If we examine American foreign policy, we have seen them weaponize, fund, and support the radical Islamic terrorists known as ISIS to get rid of nation states inside of the middle east. Iran is one of the countries that are fighting against ISIS and these terrorists.

All of this conflicts with the real reason we went into Afghanistan in 2001 which was to fight terrorism. Terrorism is just an excuse since there are greater geopolitical stakes involved. These policies are detrimental to the people of the United States but are beneficial to bankers like Goldman Sachs and the military contractors and generals that surround Donald Trump. These policies are stupid and will not change even though Trump made promises to do so. This will eventually result in the decline of the United States and the destruction of our nation state. 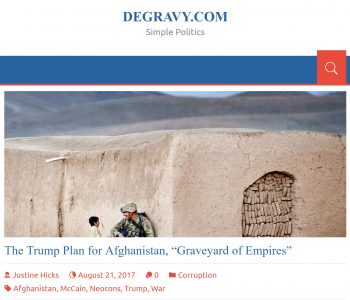 So yeah, that’s what is happening from my perspective. Let me know if you agree or disagree in the comments.

I want to thank everyone who donates, and you are more important than ever before. No matter what I love you and thank you so much for being here, for your support and your viewership.