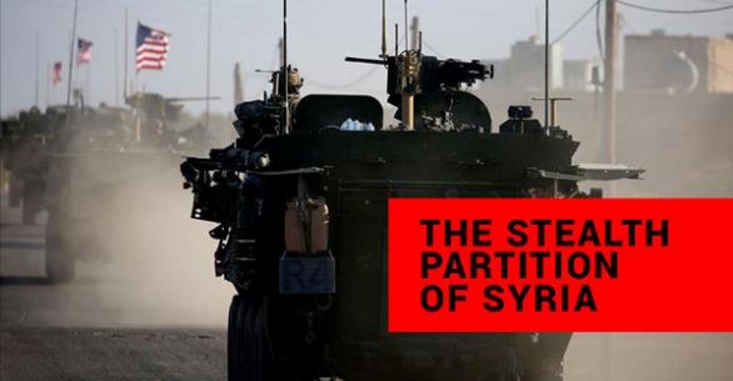 Escalation is still on the table.

With Russia backing the Syrian army the U.S. and the rest of the Sunni Axis seem to have given up their plans for a full regime change in Syria. This does not, however, mean that the danger of an escalation has passed. Plan B among U.S. foreign policy hawks has always provided for two backdoor paths to war: the establishment of no-fly zones (now renamed as “safe-zones”), and the partition of Syria along sectarian lines.

Trump has signaled that he supports the establishment of “safe-zones” in Syria to manage refugees before they reach Europe. However in practice it is unclear how this would be any different from Clinton’s proposal to establish no-fly zones; a policy that Trump at one point warned could spark World War III.

“What we should do is focus on ISIS. We should not be focusing on Syria,” Trump told The Guardian. “You’re going to end up in World War III over Syria if we listen to Hillary Clinton.” He continued: “You’re not fighting Syria anymore, you’re fighting Syria, Russia, and Iran, all right? Russia is a nuclear country, but a country where the nukes work as opposed to other countries that talk.”

Safe-zones would be toothless without control of airspace, so either Trump hasn’t thought this through, or is assuming that renaming the venture will be enough to put anti-war activists off the scent. Foreign policy analysts, however, are viewing this as potential flashpoint.

“I do think that it presents escalation risks,” Melissa Dalton, a senior fellow at the Center for Strategic and International Studies who was formerly a country director for Syria at the Department of Defense, told Business Insider. “If the US decides to pursue a safe zone, it needs to do so in the broader framework that looks at what sort of levers, what sort of coercive measures can the US bring to bear on Russia, Assad, and Iran to ensure that the safe zone is not violated and to mitigate the risks of military confrontation.”

Russia has expressed concern, but is keeping their response diplomatic, warning the U.S. to “think about the potential consequences of establishing safe zones.”

The Siege of Raqqa

As the U.S. military and Kurdish forces surround Raqqa in preparation to take the city, most media attention has focused on the possibility of its dam being destroyed by ISIS. However a far more important development passed under the radar. On March 23, Radio FreeEurope reported that the U.S. intends to use the operation to block Syrian government forces.

Besides recapturing the dam, SDF said the U.S.-backed operation also aimed to block any advance by Syrian government forces from the west.

The implication here is that the U.S. doesn’t intend to give Raqqa back to Syria at all, but would rather hand over power to one of their proxies and facilitate the establishment of a new government. If this is indeed the case, it would be naive to assume that this new government would limit its territory to this one city.

In order to hold its position over the long term, they would have to extend their borders significantly, most likely towards Turkey. Turkey clearly sees this implication, and is not pleased. Turkey obviously isn’t concerned about violating Syria’s sovereignty, but they view any move that strengthens the Kurds as a potential threat.

At this stage it is clear that Trump’s anti-war campaign rhetoric will have little bearing on policy. Russia sees this, and you can rest assured that they are planning accordingly, but as of yet they have declined to expose their hand. Their lack of an immediate response does however indicate that they intend to allow the U.S. to commit itself fully before making any significant move. Once the U.S. is holding Raqqa this will cease to be a war of airstrikes, and proxy insurgencies, and will become an occupation, and that’s a completely different ball of wax.

This is comparable to an amateur chess player pushing a cluster of pieces deep into enemy territory early in the game with no real long term plan. Russia will bide its time.

Trump's Stealth Partition of Syria – "Safe Zones" and the Siege of Raqqahttp://stormcloudsgathering.com/trumps-stealth-partition-of-syria

Posted by StormCloudsGathering on Friday, March 31, 2017