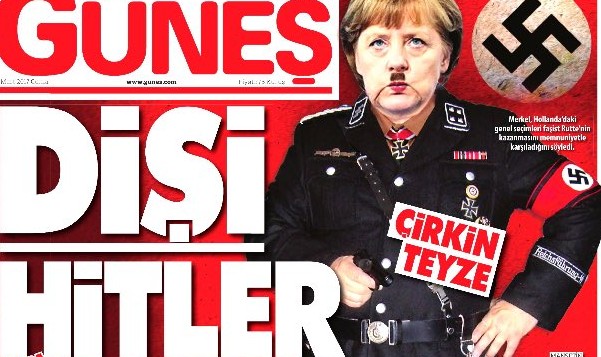 The pro-government Turkish newspaper “Turkish Daily” depicted Chancellor Angela Merkel as “She Hitler” on its front page, wearing a Nazi uniform with a Hitler mustache.

Right-wing tabloid daily Gunes (“Sun”) printed the picture along with the words in German: “#Frau Hitler” and called her an “ugly aunt,” reported AP.

Turkey and Europe have been in a bitter spat after Germany and the Netherlands blocked Turkish ministers from holding rallies to campaign for a “yes” vote in next month’s referendum on expanding President Recep Tayyip Erdogan’s powers.

This was followed by the German government’s newspaper a few days ago accusing the Turkish leader of “endangering Europe’s stability through his lust for power.”

“Bild tells the truth to Erdogan’s face — you are not a democrat! You are hurting your country!” the German daily said.

Erdogan has constantly accused Germany and the Netherlands of acting like “Nazis,” and claimed Merkel is “supporting terrorists.”

The paper also accused Merkel of supporting terrorist organizations and trying to be the leader of fascists using Austria, the Netherlands, and Belgium in “Germany’s backyard.”

“Germany, which has open arms for terrorist organizations… is trying to instigate the whole of Europe against Turkey,” the daily said.