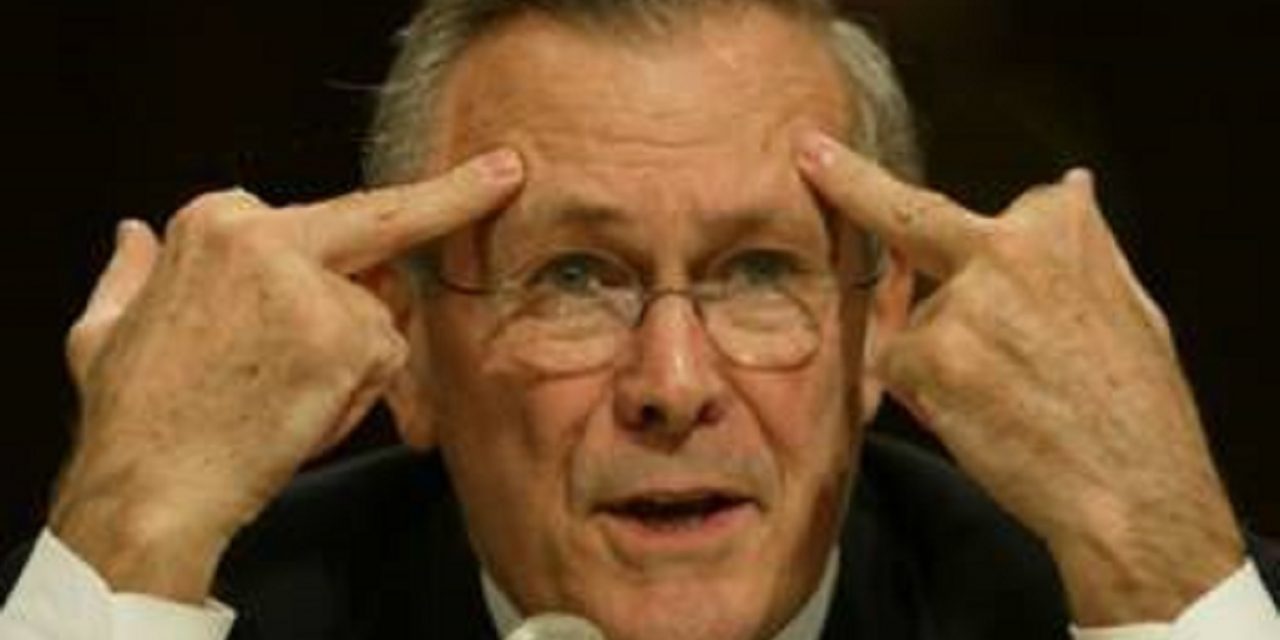 Donald Rumsfeld took to Twitter on Tax Day to express his despair over the fact that at 83-years-old he may never live to see a flat tax enacted.

The former Secretary of Defense sent out a series of three tweets, doing what many Americans are doing today — complaining about taxes. Seems harmless, right? Not when you are globally hated war criminal.

Over half a century of filing my taxes and I know I do not know if I have done so correctly. It remains a known unknown. #TaxDay

Hope springs eternal – after writing the IRS on #TaxDay for decades, I am still waiting for a response. pic.twitter.com/1xvv0rNOhO

At 83, I am close to losing hope that I will live to see a flat tax.

Rumsfeld wasn’t met with the friendly consoling and compassion that so many others have been met with today, as Twitter’s notorious snark came flying out on full display — reminding him that at least he “got to start” his “own war” and lamenting that maybe he will see it in hell.

.@RumsfeldOffice at least you got to start your own war!

Many jumped on the Tweets to scold the former Secretary of Defense for his role in the Iraq War, and other wrongdoing during his time serving the George W. Bush administration.

@RumsfeldOffice If only you were one of those lucky Iraqi civilians you would only have had to make it to 12.

Others expressed their own sadness — that they may not live long enough to see him prosecuted for his war crimes.

.@RumsfeldOffice at 18, I am close to losing hope that I will live to see you prosecuted for war crimes

Some really didn’t hold back, as they flat-out publicly requested and/or wished for his death.

i am close to giving up hope that i'll live to see @RumsfeldOffice executed via being spanked on the bare bottom to death.

There are seemingly endless reasons to throw hate at Rumsfeld, but one of the most common reasons is that he was a leading architect of the Iraq War, while famously claiming that it had “nothing to do with oil, literally nothing to do with oil.” He was also involved in decision making which allowed the extrajudicial execution of several people — a war crime and breach of the Geneva Conventions.

Additionally, the use of torture in facilities such as Guantanamo Bay and Abu Ghraib occurred as he was serving as the Secretary of Defense.

Appearing before the Senate Armed Services Committee in 2004, Rumsfeld stated, “these events occurred on my watch as Secretary of Defense. I am accountable for them,” yet it does not appear that he will ever be prosecuted.

“There are other photos — many other photos — that depict incidents of physical violence towards prisoners, acts that can only be described as blatantly sadistic, cruel and inhuman,” Rumsfeld told the Senate Armed Services Committee. “And I am advised there also are videos of these actions.”

“These events occurred on my watch,” Rumsfeld continued. “As secretary of defense, I am accountable for them and I take full responsibility.”

We Are Change’s Luke Rudkowski recently questioned Rumsfeld on the streets of New York. The video is below.