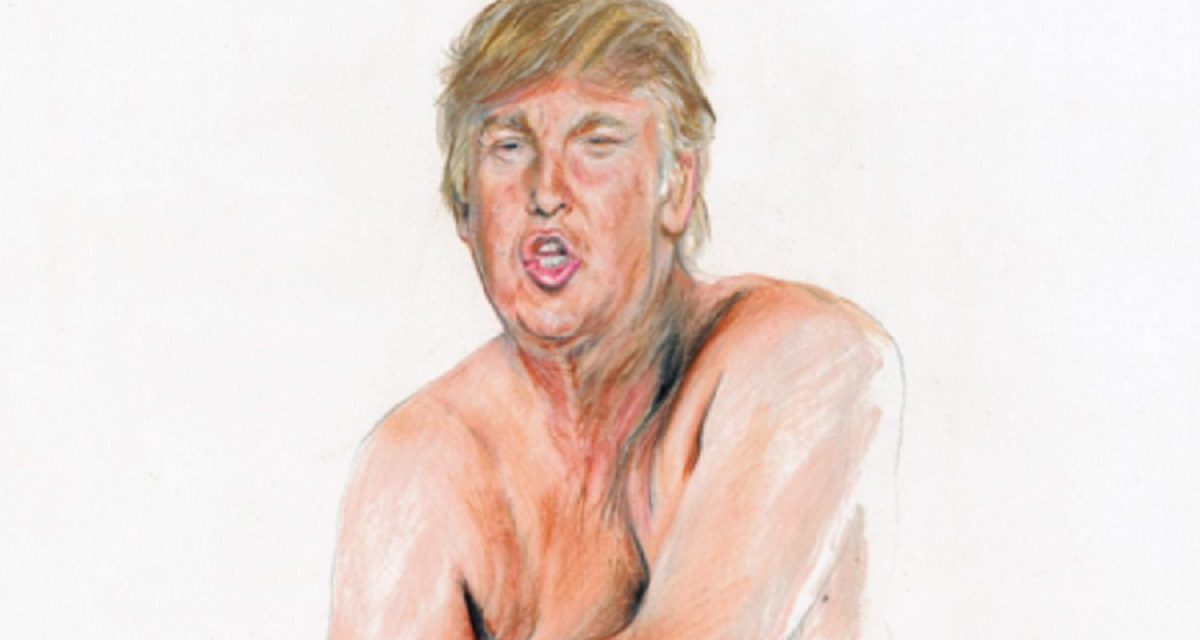 A Los Angeles artist whose painting of Donald Trump in the nude rapidly went viral is now being threatened with a lawsuit by the Republican front runner’s legal team.

The painting of Trump — with a tiny penis — is titled “Make America Great Again,” and is striking in it’s resemblance to the candidate.

“Because no matter what is in your pants, you can still be a big prick,” the artist, Illma Gore, wrote in the statement accompanying the painting.

The painting went so viral that it is now on display at the Maddox Gallery in Mayfair, London, and has reportedly received bids of over $141,000.

No cultural calling for the weekend? Make us your go-to destination and catch THAT @illmagore work before it's gone. pic.twitter.com/COWYEbrw09

After the image took over the internet, Gore says that she began receiving threats of rape, “detailed death threats” and stalkers at her home, The New York Daily News reported.

It hasn’t just been physical threats however, as Gore has also received warnings of legal action from Facebook for copyright violation under the Digital Millennium Copyright Act, and now phone calls from the candidate’s lawyers.

Gore alleges that she has been called twice by the former reality television star’s legal team, threatening her with lawsuits claiming Trump’s “right to publicity.”

Gore painted the penis in February, before the size of Trump’s manhood became a surprising topic at a presidential debate.

The media buzz about Trump’s package went into overdrive earlier this year, after former candidate Marco Rubio commented about the front runner’s “small hands” at a campaign stop.

“He’s always calling me ‘little Marco,’” the Florida senator said. “I’ll admit he’s taller than me. He’s like 6-foot-2, which is why I don’t understand why he has hands the size of someone who’s 5-foot-2. Have you seen his hands? And you know what they say about men with small hands?”

As far as Gore, she is holding her ground and has issued a lengthy statement to her Facebook page decrying the threats she has received over her artistic expression.

“I have been banned on social media, from selling the painting on eBay, from showing it in galleries in America; other people have been banned for sharing it and printing it. For weeks I’ve been in an almost silent battle with an undisclosed third party for my right of freedom of speech, which is your freedom of speech too, even if you dislike the painting. As someone who believes in equality for all, and therefore freedom of speech for us all. In regards to this painting, you can think that my opinion is wrong, you can rally for or against my work and that is your Constitutional right as an American, but you don’t have the right to decide whether someone gets to speak or express themselves. If my artwork is censored, then my speech and expression is censored, therefore and I am no longer free to speak,” Gore wrote.

Gore isn’t alone in artistic mocking of Trump’s “hands.” The March 28th cover of New Yorker magazine features a painting called “The Big Short,” by Barry Blitt — of a parody palm reading. The words on the palm say things you may expect to hear from the candidate such as: “Not short. Normal.” and “Leadership skills up the wazoo.”

A priceless @NewYorker cover; #Trump's tongue is certainly larger than his hands… pic.twitter.com/matCq4P3rP