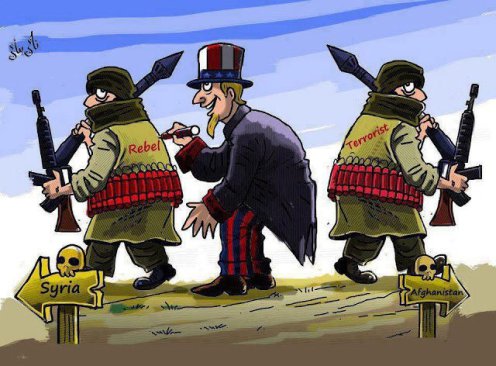 US-led air strikes on Syria have killed more than 500 people, mainly Islamist militants, since they began last month, activists said as fighting continued in the border town of Kobani.

The Britain-based Syrian Observatory for Human Rights, which relies on a network of activists on the ground, said 553 people had been killed since the air strikes began on 23 September, including 32 civilians. The civilians included six children and five women.

The group said it has documented the deaths of 464 Islamic State (Isis) fighters, adding that the real number could be much higher. Another 57 fighters with the al-Nusra Front, which has links to al-Qaida, were killed in air strikes on the northern Syrian province of Aleppo and Idlib, the Observatory said.

unidentified military plane flies over Kobani
An unidentified military plane flies over Kobani. US central command says its forces have conducted more than 135 air strikes against Isis militants . Photograph: KAI Pfaffenbach/Reuters
Many of the Isis fighters have been killed in or near Kobani, which has been the target of a massive jihadi offensive since mid-September. Isis fighters have captured dozens of surrounding Kurdish villages and forced more than 200,000 people to flee into neighbouring Turkey.

Earlier this week, the US central command said its forces have conducted more than 135 air strikes against Isis militants in and around Kobani, killing hundreds of fighters.

“Combined with continued resistance to Isil [another acronym for Islamic State] on the ground, indications are that these strikes have slowed Isil advances into the city, killed hundreds of their fighters and destroyed or damaged scores of pieces of Isil combat equipment and fighting positions,” central command said in a statement.

An Associated Press journalist on the Turkish side of the border said heavy machine gun fire could be heard on Thursday from Kobani, which is also known as Ayn al-Arab.

“The fighting has been ongoing since last night on the eastern and southern fronts. It is some of the longest clashes in Kobani,” said Kurdish activist Farhad Shami by phone from the town. “The fighting usually only takes place at night.”

Shami said Isis launched an attack from three fronts late on Wednesday but failed to advance. Kurdish fighters withdrew from the Tel Shair hill that overlooks parts of Kobani, he added.

The hill was captured by the Kurds from Isis earlier this month.

Idris Nassan, deputy minister for foreign affairs in a Kurdish civil administration controlling Kobani, said that although Isis fighters had moved on to Tel Shair hill, the heavy fighting there was ongoing.

“Kobani has been witnessing fierce clashes since last night. It was one of the bad nights,” he said.

The Observatory reported four US-led air strikes on oil wells in the Jafra field in the eastern Syrian province of Deir el-Zour late on Wednesday. The Local Coordination Committees, an activist group, also reported the air strikes in areas held by Isis.

The US-led coalition has targeted Isis-held oil facilities in Syria, which provide a source of income for the militants. But such strikes also endanger civilians, which could undermine long-term efforts to destroy the militant group.

The attacks on the oil industry, including refineries, have also led to a sharp rise in the price of oil products in rebel-held areas of Syria.