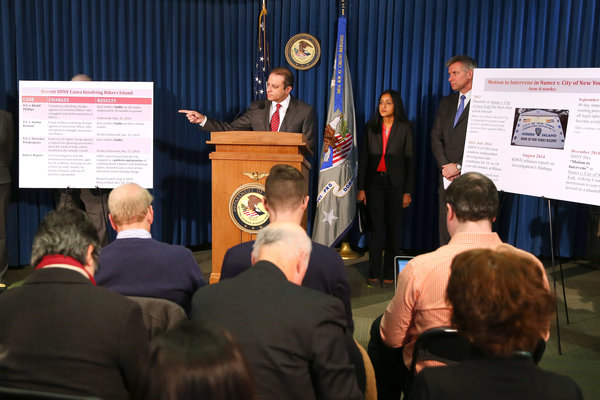 Federal prosecutors plan to sue New York City over widespread civil rights violations in the handling of adolescent inmates at Rikers Island, making clear their dissatisfaction with the city’s progress in reining in brutality by guards and improving conditions at the jail complex, a new court filing shows.

The decision to go to court comes more than four months after the office of Preet Bharara, the United States attorney for the Southern District of New York, issued a blistering report that cited a pervasive and “deep-seated culture of violence” directed at teenage inmates at Rikers.

The report found rampant use of excessive force by correction officers, the overuse of solitary confinement and an ineffectual system of investigating assaults by guards. Weeks earlier, an investigation by The New York Times documented the cases of 129 inmates who had been seriously injured in altercations with guards last year.

The federal report — the fruit of a 2 ½-year investigation by Mr. Bharara’s office — proposed more than 10 pages of remedial measures for the city’s Correction Department and warned that if significant changes were not made at Rikers, the Justice Department could file a lawsuit and seek court-ordered reforms.

“While the United States had hoped to reach a speedy resolution with the city on these critical issues,” Mr. Bharara’s office said in the filing on Thursday, “thus far insufficient progress has been made.”

Instead of filing a separate lawsuit against the city, Mr. Bharara’s office asked a federal judge in Manhattan on Thursday for permission to join in an existing class-action lawsuit over brutality at Rikers, Nunez v. City of New York, that had been filed by the Legal Aid Society and two private law firms, Emery Celli Brinckerhoff & Abady and Ropes & Gray. In contrast to Mr. Bharara’s investigation of the treatment of adolescent inmates, the Nunez case focuses on all Rikers inmates, regardless of age.