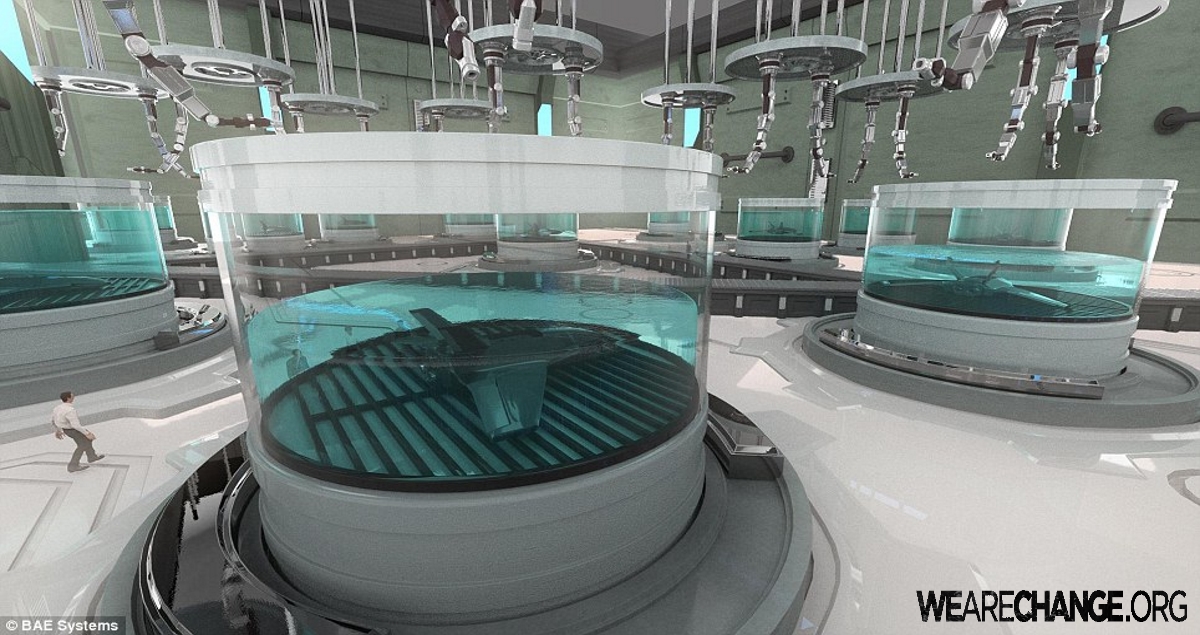 While 3D printing could eventually cut down on the time it takes to manufacture products, it still requires months if not years to develop them from concept to final end-use product. Any new product generally requires a significant investment in time and production resources. Even speeding up a single process like the manufacturing of components with 3D printing won’t accelerate the assembly phase, especially on complex products like airplanes or drones. Even 3D printing can’t produce working, finished complex technology instantly, not yet at least. Raw materials would be put into a chemical bath, which would ‘grow’ the assembled drone. Via. 3dprint.com/

As UK defense and aerospace company BAE Systemsprepares themselves for the upcoming Farnborough International Airshow, some of their scientists and engineers were asked to outline their current ides for the future of designing and manufacturing military aircraft. They envision the 3D printers of the future to be a lot more efficient, and a lot different than what we have available to us today. The BAE scientists believe that within this century they will be capable of growing Unmanned Air Vehicles (UAVs) using advanced chemistry and large chemical baths. The process would be capable of creating functional, near fully assembled drones for specific military operations within a matter of weeks.

“The world of military and civil aircraft is constantly evolving and it’s been exciting to work with scientists and engineers outside BAE Systems and to consider how some unique British technologies could tackle the military threats of the future,” explained BAE Systems Global Engineering Fellow Professor Nick Colosimo.

The ideas and concepts or these lab-grown aircraft were developed as part of their collaborative approach to sharing technology and scientific ideas with other established companies, new tech startups and researchers in academia. The process would require a cutting-edge chemical 3D printer and computer called a “Chemputer” that would grow the customized aircraft and some of their electronic systems at the molecular level. The drones would take shape by introducing raw materials into the chemical baths and apply centrifugal force. This would encourage the aircraft to form into their final shapes, and the process could even be used for larger aircraft components that could later be assembled. This could be the drone manufacturing facility of the future.

“This is a very exciting time in the development of chemistry. We have been developing routes to digitize synthetic and materials chemistry and at some point in the future hope to assemble complex objects in a machine from the bottom up, or with minimal human assistance. Creating small aircraft would be very challenging but I’m confident that creative thinking and convergent digital technologies will eventually lead to the digital programming of complex chemical and material systems,” explained Regius Professor at the University of Glasgow Lee Cronin, who is also the Founding Scientific Director at Cronin Group PLC, the company that is helping to develop the Chemputer.

Obviously this is just a concept of possible future technology, and while it all sounds a bit wild, as one of the world’s largest military technology and aircraft developers, BAE Systems isn’t known for selling tall tales. The early phases of exploring the use of chemicals to assemble raw materials into specific, complex end-use products has already begun. The company is even suggesting that the process could be achieved using entirely environmentally sustainable materials. Because naturally when you’re building advanced military grade weapons, the environment comes first. Don’t worry, our advanced military weapons of the future will be biodegradable.

While BAE Systems and their corporate partners seem to be focused on the potential military and aerospace applications, the same process could also revolutionize civilian industry and technology. Similar chemical 3D printers could be used to manufacture anything from cars and other vehicles, personal electronics and even furnishings. And before you scoff at the possibility, remember that many people believed that 3D printing would never be a useful tool for manufacturing, and yet here we are. Discuss further in the Chemputer 3D Printer forum over at 3DPB.com.

Futurism.com/  Building the future together

Chemical Drones To Market by 2020 The Official Report TX

Video: The Rockefeller Center For The Study Of Eugenics