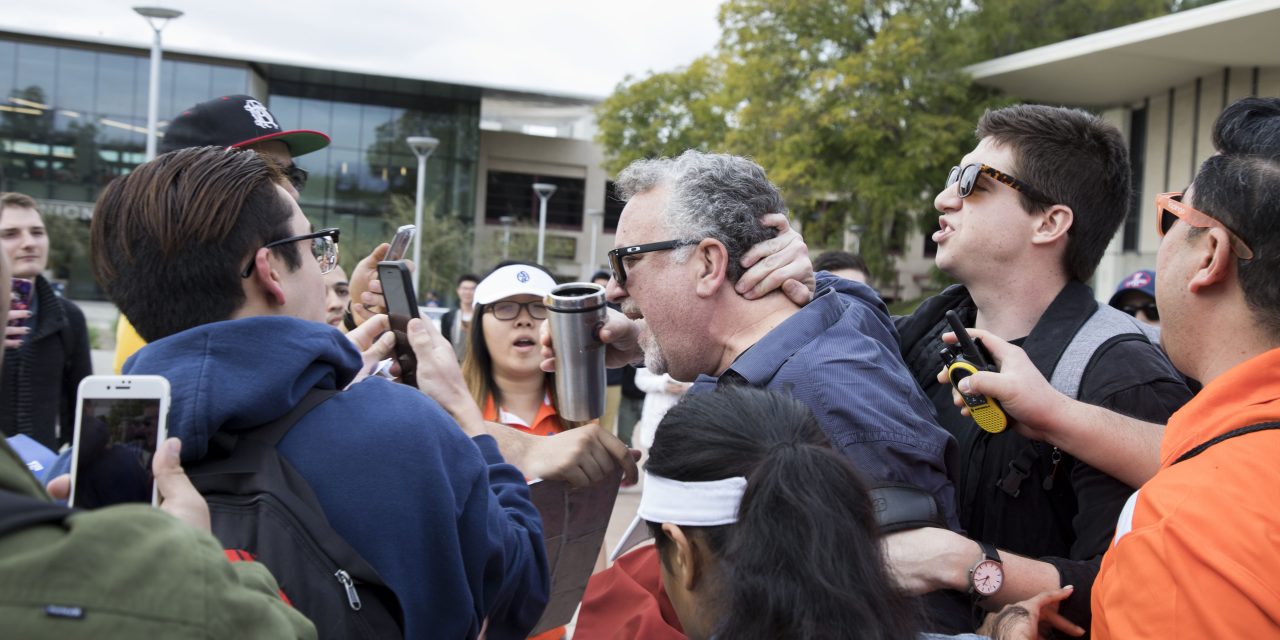 An instructor at California State University, Fullerton, is under investigation after allegedly assaulting a student during a “No Ban No Wall” protest being held on campus. 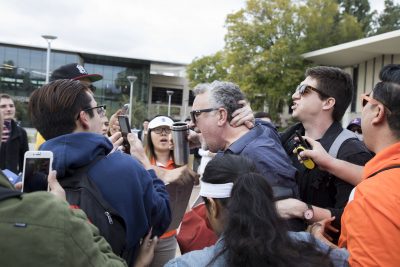 Students for Justice in Palestine had organized a protest of President Donald Trump’s executive order on immigration, and the College Republican club decided that they were going to make their voices heard as well — by organizing a counter-protest.

BREAKING: Protesters move back to Humanities, chant "Let them in, kick Trump out!" pic.twitter.com/5aY3yAjvwS

As the two protests collided, the instructor, who is a part-time lecturer, got into an altercation with two students from the College Republican club as well as another counter-protester. The university is currently withholding his name from being made public, but Breitbart reports that his name is Eric Canin, a part time anthropology professor.

A man claiming to be a professor has assaulted one of our protesters. We are in contact with the police.

“Canin approached the College Republicans group as they were marching, and attempted to rip away the sign College Republican Jared Lopez was holding. Another member of the group, Bryce Ignalls, saw what was happening and allegedly attempted to separate the professor from the student,” Breitbart reported on Wednesday. Canin then went on to strike Ignalls in the face, according to Fullerton Republicans President, Christopher Boyle, who witnessed the incident.

Ignalls is now seeking to press charges against the faculty member for battery, and has filed a police report.

Canin claims that he did not physically touch anyone, and that the Republicans had been “making fun of him.”

“I did not see (Canin) hit (Ingalls), but I saw (Ingalls) on the ground,” music department professor Ken Walicki told the Daily Titan.

CSUF Chief Communications Officer Jeffery D. Cook tweeted after the incident took place that,  “#CSUF prizes and promotes free and open expression. Any violent incident, however isolated, cannot be tolerated and is unacceptable.”

“It’s unfortunate that young republicans and College Republicans can’t take their safety for granted on campus and get attacked for their views,” said Boyle. “I felt shocked that this kind of violence could take place on our campus. Or job on campus is to stand up for republicans and conservatives and when I see anyone especially a professor physically attacking a student I feel like it’s my responsibility to step in and be the safeguard that republican students deserve. After he assaulted a student, I put him under a citizen’s arrest and I want to make sure he is going to be held accountable.”

According to an update on Twitter from the CSUF Republicans, Canin will not be penalized for the violence.

It appears that the professor that assaulted one of our members will not be penalized. We'll keep you updated!

Captain Scot Willey of the Cal State Fullerton Police Department told the OC Register that the department was trying to figure out exactly what happened so that they could decide if charges are warranted.

“There were no other issues,” the captain said. “Everything was peaceful, if somewhat boisterous, on both sides.”