US announces latest troop increase in Iraq, to more than 4,000 personnel 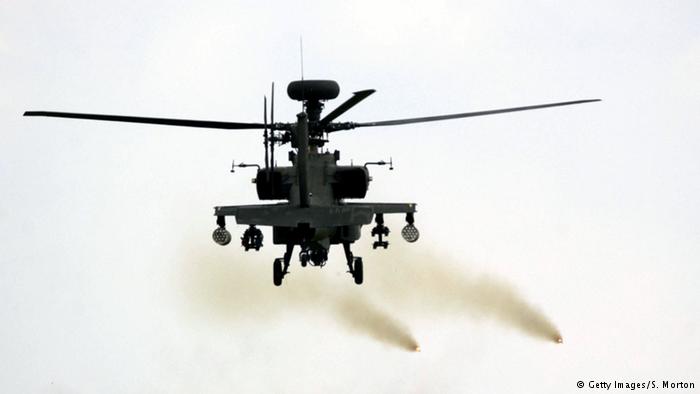 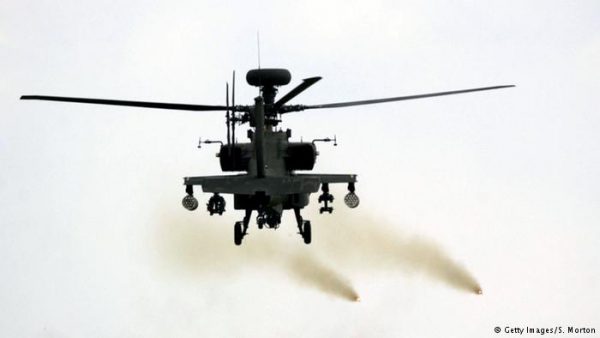 The latest US troop deployment is modest in size but will put soldiers nearer the front lines, primarily in advisory roles. Apache helicopters will also be provided, as officials hope to retake the city of Mosul.
An Apache helicopter fires two rockets during a training exercise
An Apache helicopter fires two rockets during a training exercise
US Defense Secretary Ash Carter announced on Monday, during a surprise visit to Baghdad, that Washington would be sending more than 200 additional troops to Iraq – along with the highly sophisticated Apache helicopters, to help Iraqi troops in their fight against self-styled “Islamic State” (IS) militants.
The announcement by Pentagon chief Carter comes after weeks of talks with Iraqi leaders and US military commanders.
Iraqi soldiers in a jeep flash the ‘v’ for victory sign; while one soldier holdsa shoulder-held missile launcher.
Iraqi soldiers begin Operation Conquest to retake Mosul
The 217 additional troops will raise the US military presence in Iraq to 4,087. Last June, Washington announced the deployment of hundreds more troops in order to help Iraqi forces retake the city of Ramadi. The city of around 275,000 people was later liberated.
Now the Iraqi government has its eyes on a far larger prize – Mosul, with an estimated 2 million inhabitants. Located in northern Iraq, about 260 miles (420 km) north of Baghdad, IS militants overran the key city in June 2014.

Iraqi army eyes Mosul after retaking Ramadi
Most new US troops will be Army special forces who will advise and assist the Iraqis. Additional troops will include trainers, security forces for the advisers and maintenance workers for the Apache helicopters.
US troops to embed with Iraqis
Known as advise-and-assist teams, the US squads are made up of about a dozen troops each. They will be embedded with Iraqi brigades and battalions, putting them closer to the fight, and at greater risk from mortars and rocket fire.
Their proximity to the front lines will allow them to provide more tactical combat advice as the Iraqi forces move toward Mosul, the country’s second-largest city. Until now, US advisers have been working from behind the lines, at the headquarters level.
The Apache helicopters are considered critical to any attack on Mosul, adding powerful precision fire to the fight.
US officials say retaking Mosul is critically important but admit it won’t be easy, as IS militants are dug in there. In addition, it is believed they have mined the roads into their self-proclaimed capital, making any invasion difficult.

IS under pressure in Syria and Iraq
The announced troop increase comes days before President Barack Obama is due to meet with Arab leaders in Riyadh. The US is willing to provide the military aid Iraq may need to defeat the IS, but the US wants the Arab Gulf states – led by Saudi Arabia – to help Iraq rebuild its cities after IS’ defeat.
The Iraqi government is eager to liberate its territories from IS occupation, but its efforts have been beset by political turmoil and an economic crisis triggered by plunging oil prices.