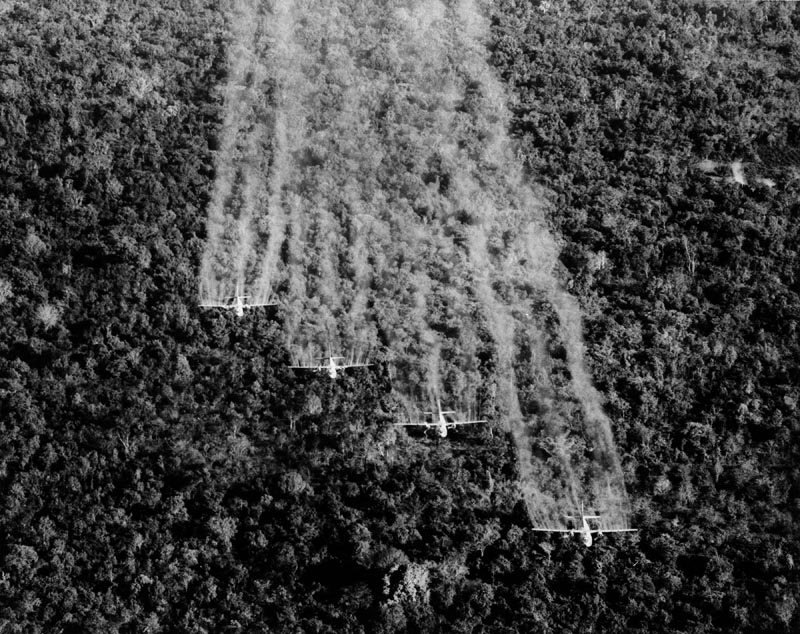 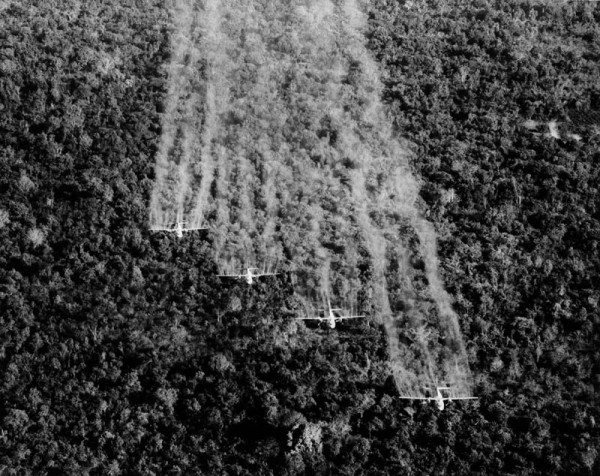 (ANTIMEDIA) Decades after the Vietnam War, the Department of Veterans Affairs acknowledged this week that Monsanto’s Agent Orange—a dangerous herbicide sprayed over 4.5 million acres across Vietnam during the conflict—is responsible for health ailments in a group of as many as 2,100 veterans. It had previously denied such allegations.
The United States government will pay out $45 million in disability benefits over ten years to compensate Air Force reservists and active-duty forces who were exposed to Agent Orange left over from the Vietnam War. The exposure came from residue on Fairchild C-123 aircraft, which were used to spray millions of gallons of the chemical, and, evidently, affected soldiers in the United States who later handled the planes from 1969-1986. According to ABC, the VA’s decision to compensate the 2,100 veterans follows a January Institute of Medicine study that found “some C-123 reservists stationed in Ohio, Pennsylvania and Massachusetts had been exposed to Agent Orange residues in the planes and suffered higher risks of health problems as a result.”
Further, “the VA said it subsequently determined that pilots, mechanics and medical personnel who served at seven other locations in the U.S. and abroad also were potentially affected – Florida, Virginia, and Arizona, as well as Taiwan, Panama, South Korea and the Philippines.”
The VA has previously acknowledged (and made compensations for) the chemical’s health effects on soldiers directly exposed to Agent Orange in Vietnam and Korea. However, considering the 2,100 veterans did not even visit Vietnam but were merely exposed to planes that sprayed the chemical, the department’s decision to pay the new set of veterans is a silent admission of just how toxic the chemical is. This is a marked shift, as the VA previously refused to compensate certain naval veterans who claimed they suffered Agent Orange-inflicted health conditions because of their time stationed off the coast of Vietnam.
There is no doubt about the toxicity of Agent Orange. Even the government details a wide range of diseases caused by exposure to the herbicide, including (but not limited to) Parkinson’s Disease, prostate cancer, respiratory cancers of the lung, larynx, trachea, and bronchus, Hodgkin’s Disease, Non-Hodgkin’s Lymphoma, Leukemia, Type 2 Diabetes and Ischemic Heart Disease. The effects of exposure to Agent Orange are also passed on to the children of victims.
While veteran exposure to Agent Orange is tragic and the compensation is warranted, the U.S. government has failed to make reparations for exposing countless Vietnamese civilians to the herbicide in its attempt to clear forest and crops during the war. According to the Vietnamese Red Cross, nearly one million Vietnamese were affected by the 19 million gallons sprayed—including generations of children born with debilitating birth defects.
Unfortunately, while the payout is the least the government can do, it constitutes yet another subsidy for the Monsanto corporation. As if the military had not done the company enough favors by buying millions of gallons of its herbicide during the Vietnam War, it now pays millions to deal with the devastating effects of those military-industrial purchases.
Between Congress passing legislation in favor of the conglomeration, its stranglehold on the FDA, and the justice system codifying its power, it is unsurprising that Monsanto has also used the military to reap profits and avoid accountability—a defining characteristic of the loathed corporation.
Such subservience to corporate interests has undermined any commitment to justice or rationality. As retired Air Force Major Wesley T. Carter (whose C-123 Veterans Association spearheaded the fight to attain compensation) said,
“Every medical and scientific fact convincing the Institute of Medicine of our Agent Orange exposures had been presented years earlier to the VA but was simply ignored or dismissed. That was wrong.”
As ABC detailed, other veterans groups “expressed tempered relief, expressing hope it would signal a new government willingness to acknowledge a wider range of toxic health risks undertaken by military personnel, such as Gulf War neurotoxins and burn pits in Iraq and Afghanistan.”
This article (US Government Finally Admits Agent Orange Poisoned Troops) is free and open source. You have permission to republish this article under a Creative Commons license with attribution to the author and theAntiMedia.org. Tune in! Anti-Media Radio airs Monday through Friday @ 11pm Eastern/8pm Pacific. Help us fix our typos: edits@theantimedia.org.