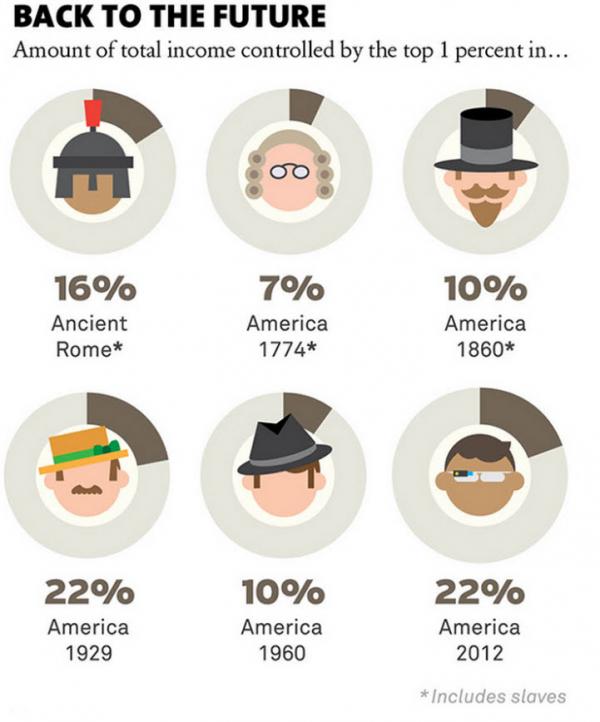 As we previously noted, only the highest income earners have seen any gains in compensation since the crisis began around 2007 to the current ‘recovery’ tops. It is perhaps not entirely surprising then that, the total income controlled by the Top 1% is drastically above that of the slave-included times of Ancient Rome and as high as the peak in the roaring 20s.

Which is hardly surprising given that since 2007, incomes have only risen for highest wage-earners…

We leave it to the following 139 words by Elliott’s Paul Singer to conclude – which in two short paragraphs explains everything one needs to know about America’s record class inequality, including precisely who is the man responsible:

Inequality in the U.S. today is near its historical highs, largely because the Federal Reserve’s policies have succeeded in achieving their aim: namely, higher asset prices (especially the prices of stocks, bonds and high-end real estate), which are generally owned by taxpayers in the upper-income brackets. The Fed is doing all the work, because the President’s policies are growth-suppressive. In the absence of the Fed’s moneyprinting and ZIRP, the economy would either be softer or actually in a new recession.

The greatest irony is that the President is railing against inequality as one of the most important problems of the day, despite the fact that his policies are squeezing the middle class and causing the Fed – with the President’s encouragement – to engage in the radical monetary policy, which is exacerbating inequality. This simple truth cannot be repeated often enough.