“i watched you disrespect us all 5 different times by checking your watch!!!,” wrote Gold Star mother, Shana Chappell (whose Facebook and Instagram accounts were ‘incorrectly deleted’ after she posted, and have since been restored).

“I actually leaned into my son’s mother’s ear and said ‘I swear to God, if he checks his watch one more time…’ I found it to be the most disrespectful thing I’ve ever seen,” Hoover told Fox News.

"I actually leaned into my son's mother's ear and said 'I swear to God, if he checks his watch one more time…' I found it to be the most disrespectful thing I've ever seen." pic.twitter.com/VG9BafFFzn

Yet, USA Today’s Funke wrote that the claims were “partly false” because Biden checked his watch “only after” the ceremony – not during. 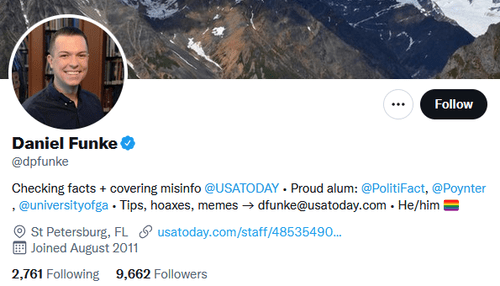 It's true. Joe Biden checked his watch during the dignified transfer of the servicemembers killing in Afghanistan at the airport. You can see him jerk his left hand to pull the watch out from under his sleeve, then look down at it. pic.twitter.com/M3QVzJbTIm

The following day, the paper issued a massive correction:

Corrections & Clarifications: This story was updated Sept. 2 to note that Biden checked his watch multiple times at the dignified transfer event, including during the ceremony itself. The rating on this claim has been changed from partly false to missing context.

In a Wednesday tweet, Funke said “I regret the error.”

As many of you already know, this story has been corrected. Biden checked his watch multiple times during the ceremony. I regret the error. https://t.co/F6bjQFYVbC

In a subsequent tweet, he said “It’s easy to dunk on journalists when we get things wrong. I get it – to many, we’re just another name on a screen. But behind that screen is a person trying to do their best.“

Clearly Funke is the victim here.

Botching a fact-check (or being straight up dishonest, more likely), then issuing a correction that is still incorrect is the hallmark of an exceptional journalist, according to Snopes editor. https://t.co/DMsA65F4Rj

Do you have any idea how harmful these lies are to our military community? You are a disgrace with zero credibility. We believe our Gold Star families and the video footage.

"Missing context" is the fact-checker euphemism for "this claim is correct but we don't want anyone screencapping this as ammo."