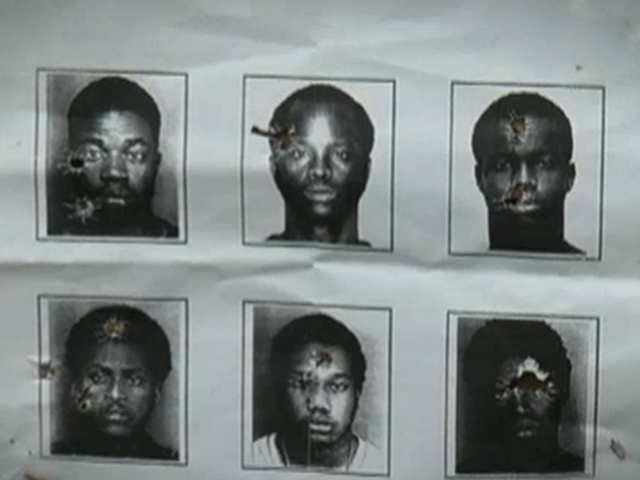 The revelation that North Miami Beach Police regularly use mugshots of young black men for target practice has ordinary citizens sending police their photos saying “Use me Instead.”

The North Miami Beach Police think it is acceptable for their officers to use mugshots of actual Black teenagers for target practice. The general public however, does not seem to agree.
The police practice was discovered last month, when Sgt. Valerie Deant, a clarinet player in the Florida Army National Guard’s 13th Army Band, arrived at the Medley Firearms Training Center shortly after members of the department had been practicing. Sgt. Deant was shocked to find one of the targets police had been using was a mugshot of her brother Woody from when he was just 18-years-old.

Woody is now a law abiding citizen, married with children. But as a teenager he had been arrested for drag racing and it was that 2000 mugshot that police were shooting at. Woody was understandably indignant, telling reporters:

“The picture actually has like bullet holes. One in my forehead and one in my eye. …I was speechless.”

For their part, police were unrepentant. North Miami Beach Police Chief J. Scott Dennis went as far as telling reporters the practice is commonplace, even though both federal and state law enforcement agencies, as well as five nearby police departments, told reporters from NBC 6 that they use commercially produced targets, and never mugshots of actual people.

“Our policies were not violated,” Chief Dennis dismissed the incident. “There is no discipline forthcoming from the individuals who were involved with this.”

That response was of no comfort to Woody Deant who worried:

“I’m not even living that life according to how they portrayed me as. I’m a father. I’m a husband. I’m a career man. I work 9-to-5. Now I’m being used as a target? Automatically in his [cop’s] mind he’s going to think target, target, target.”

Perhaps Police Chief Dennis is unconcerned about using the mugshots of young black men for target practice, but not so the public. Tonight citizens have announced a “We Are Not Your Targets” rally in front of the North Miami Beach Police Department posting on the event’s Facebook page:

The North Miami Beach police officers have been using the pictures of Black men as shooting range target practice. We are outraged and disgusted at this continuous devaluing of Black lives.
Come join us on the streets this Tuesday at 6p.m. to send the message to the North Miami Beach Police Department that #wearenotyourtargets!

A second social media protest is also ongoing, started by religious clergy who began posting their photos to Twitter and Facebook with the message “use me instead“. That effort has quickly picked up steam as everyday people – predominately white people – from all walks of life, offer up their photos for target practice, telling Chief Dennis if his police must use real people to shoot at, at least stop using pictures of young black men, offering themselves up instead.

If you’d like to participate, just upload your photo on Twitter using the hashtag #UseMeInstead, and while you’re there, be sure to take a look at all the others who have done the same, like Rosie Mae in the photo above.

How can any police department think shooting at photos of real life black men is in any way an acceptable practice , much less a good idea?