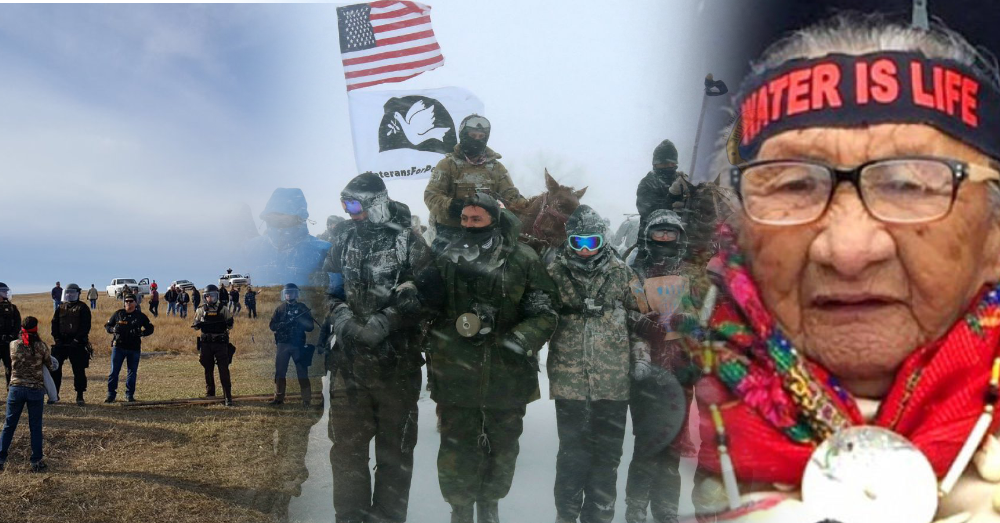 “We are prepared to put our bodies between Native elders and a privatized military force,” Elizabeth Williams, a U.S. Air Force veteran, told the Guardian on her decision to come to Standing Rock as a human shield.

Williams and perhaps hundreds of other military veterans are descending on several remaining camps at Cannon Ball, North Dakota, near the banks of the Missouri River’s Lake Oahe reservoir in a last stand against construction of the Dakota Access Pipeline.

“This is a humanitarian issue,” asserted U.S. Navy veteran Matthew Crane. “We’re not going to stand by and let anybody get hurt.”

But things could get ugly. They have multiple times in the past.

Indeed, hostilities have increased on every front — the Standing Rock Sioux Tribe Council voted to ask water protectors not from the area to go home. A multi-state police force led by the Morton County Sheriff’s Department randomly employs violence against water protectors it also wishes would leave.

Meanwhile, the few hundred water protectors remaining in Standing Rock have vowed to halt the pipeline, no matter the cost — up to and including paying with their lives. That’s where the veterans come in — they see shielding the unarmed water protectors as not only the right thing to do, but as duty.

And they are well prepared.

“We’ve stood in the face of fire before,” Williams continued. “We feel a responsibility to use the skills we have.”

Jake Pogue, a veteran of the Marines, expressed concerns about possible police tactics in coming days and told the Guardian, “We’re not coming as fighters, but as protectors. Our role in that situation would be to simply form a barrier between water protectors and the police force and try to take some of that abuse for them.”

This is no ordinary protest — camps at Standing Rock began breaking ground in April last year, and have since become fully-functioning mini-cities. Now, however, water protectors are racing two clocks — the first involves fully cleaning up camps in the floodplain before the spring thaw; and the second, completion of Dakota Access.

In vowing to stay and fight the pipeline, water protectors have loosely complied with requests from the tribe and authorities to evacuate the floodplain — and even attempted to establish a camp on higher ground. But the nascent Last Child Camp nearly immediately fell to police — and 76 were arrested — under the pretense the location was private property.

With authorities, locals, certain leaders of the Standing Rock Sioux, and President Trump’s administration progressively inimical to the #NoDAPL movement, the assistance of veterans will be as welcome now as it was last year.

Much hype surrounded the first group of veterans who came to Standing Rock, but major shortcomings in official leadership led to chaos and confusion — and even stranded a large faction inside a barely-heated gymnasium away from the camp for several days without communication.

Despite lingering bitterness over that deployment, some of the same veterans now plan to return with the same mission — to form a human shield for protectors and absorb the rubber bullets, tear gas, pepper spray, concussion grenades, water cannons, or any of the other ostensively less-than-lethal weapons at Morton County’s disposal.

Water protectors have come to expect the worst from law enforcement — offensives by police robbed a Native American woman of her eyesight in one eye, and a non-Native supporter nearly lost her arm when an explosive projectile ripped open flesh to the bone. This barbarism had been darkly par for the course for police.

But now, after Energy Transfer Partners received the green light to continue drilling under Lake Oahe by the U.S. Army Corps of Engineers this week, water protectors find themselves in the precarious position of knowing law enforcement and National Guard troops will likely move to forcefully clear camps and arrest anyone remaining — but not knowing when the move will come nor how brutally they will be treated.

Vets dedicated to guarding the unarmed as they take a last stand also know this — but their very presence creates a political nightmare.

After all, if live ammunition is fired by police and National Guard against unarmed water protectors and U.S. military veterans on land rightfully belonging to Native Americans via several treaties, the fallout would be rightly insurmountable for those in charge.

“This historical trauma of indigenous communities in this country is very real. It’s tragic,” Crane explained. “The military has a lot of the same problems.”

In telling ways, Indigenous water protectors facing government-initiated violence echoes through an unbroken history — one in which Native American lives have been devalued in the eyes of politicians and corporate elite, who quantify — rather than treasure — the geography of this land.

Veterans — many of whom have also been devalued by the government upon return from duty — relate particularly well to the traumas suffered at Standing Rock. Water protectors who haven’t directly been impacted by brutal policing have likely either seen it happen, or know someone who has been injured — and many suffer post-traumatic stress disorder because of this.

“We are able to talk about PTSD,” said Mescalero Apache Tribe member, Aubree Peckham, of the intense bonding between Indigenous protectors and veterans. “And they finally feel like they are understood.”

Some of the vets see protecting the camps as atonement for fighting in wars they later learned had far more to do with natural resources or the whims of politicians and corporations than anything remotely pertaining to freedom.

This article first appeared on TheFreeThoughtProject.com and was authored by Claire Bernish.