VIDEO: Is Bilderberg For Or Against Donald Trump?

In this video Luke Rudkowski of WeAreChange interviews Mark Anderson from the American Free Press, who has covered the Bilderberg meeting for many years. Its Day 3 of Bilderburg and Anderson let’s Luke know who is attending the meeting from Trump’s team. Anderson brings Dr. Nadia Schadlow to Luke’s attention saying that Schadlow thinks Russia has “…a big grand master plan to target the West.”

Chris Liddell – Christopher Pell Liddell CNZM is a New Zealand-born US-citizen, businessman and philanthropist, who serves as Assistant to the President of the United States and is the Director of Strategic Initiatives in the White House.

Wilbur Ross – Wilbur Louis Ross Jr. is an American investor and government official who is the current United States Secretary of Commerce. 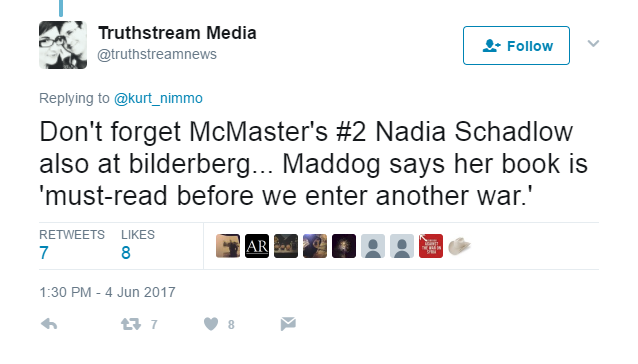 So who is Ms. Schadlow?

General McMaster asked Nadia Schadlow, a US foreign and defense policy expert, to join his staff as a deputy assistant to the president for national security strategy. The position on the staff of President Donald Trump’s national security advisor, Gen. H.R. McMaster, is responsible for preparing the US National Security Strategy, the administration’s blueprint for pursuing its global interests.

Dr. Nadia Schadlow is a senior program officer at the Smith Richardson Foundation, where she identifies strategic issues that warrant further attention from the U.S. policy community and manages and develops programs and projects related to these issues. She served on the Defense Policy Board from September 2006 to June 2009 and is a full member of the Council on Foreign Relations.

Schadlow is the author of a recent book that examined 15 cases in which the United States Army intervened abroad and the service’s role in political and economic reconstruction.

Schadlow writes for warontherocks.com which describes itself as, “…a platform for analysis, commentary, debate and multimedia content on foreign policy and national security issues through a realist lens.”

The ‘About’ page contains a paragraph titled “Realism”,

“Realism teaches us how to think about the world, rather than what to think about it. It is a broad term that encompasses people of many opinions with a variety of party affiliations but all of whom believe in the centrality of fear, honor, and interest as drivers of inter-state affairs. Politics is power. À la Morgenthau, we understand power as “anything that establishes and maintains the power of man over man …. from physical violence to the most subtle psychological ties by which one mind controls another.” As such, while we focus on armed force, we do not dismiss ideas and social control as mechanisms for power.”

Schadlow contributed an article titled “The Problem With Hybrid Warfare”. The definition of Hybrid Warfare, according to Schadlow:

“Hybrid warfare is a term that sought to capture the blurring and blending of previously separate categories of conflict. It uses a blend of military, economic, diplomatic, criminal, and informational means to achieve desired political goals.”

Schadlow says that the Russians “have it down” when it comes to hybrid tactics and “we do not”. Schadlow thinks that the use of these more subtle tactics would be able to cripple a state before the leaders even realise they are at war. Schadlow points out that this blurs the line between war and peace, making it difficult for the members of Nato to know when to act.

With regards to Russia and the surrounding area, she says:

“Moscow appears to be deliberately staying under the Article V threshold, while still pursuing its aggressive aims and seeking to destabilize NATO members. For decades, NATO leaders argued about coordinating against “out of area threats” and whether attacks in places such as the Middle East and Africa merited a NATO response. It is ironic that conflict in the very heart of Europe could lead to the same divisions.”

Make sure to check out the American Free Press website which describes itself as “the antithesis of the controlled mainstream press.”

Make sure to watch Luke’s newest video, out now, to find out the news about the mysterious Bilderberg meeting!

We have a large amount of information about Bilderberg on wearechange.org so make sure to check that out too!