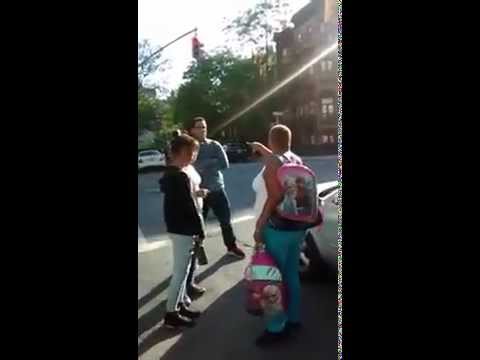 On May 14, copwatcher Michael Barber of the Copwatch Patrol Unit was out doing a great public service in which he frequently engages – filming the police.  As he was doing so, he captured something absolutely amazing.

The video, originally posted to Facebook early Friday morning, captured undercover officers grabbing at children while attempting to arrest a 14-year-old girl.  This was reportedly over allegations that a child who was with her, who witnesses say appeared to be around 7-years-old, had pushed the button on a police call box.

“May 14 around 7PM in Washington heights 140st and Hamilton undercover officers Gonzalez from the 30th Pct. NYPD over stepped his boundaries and was not following proper protocol . ?#?PoliceThePolice?” Barber’s caption read.

What begins as a typical video of police abusing their badges takes a dramatic turn for the absolute best around six minutes in.

An angry member of the community boldly approached the officer and informed him that he has no business laying his hands on a 14-year-old child.  She continues to bravely defend the child’s rights without backing down, adamantly demanding the officer’s names and drilling it into the teenagers that they need to tell their parents what the officers did.

Around 6:20 the officer jumps out of his vehicle and charges towards one of the young girls who was calmly explaining to him that she had not done anything wrong.  She continues to back away and witnesses, women and children, jump right in – trying to get between the teenager and the plain-clothed officer trying to snatch her.

At 7:11 the officer makes another move to grab the young girl and a woman jumps in and rips her away from his grasp, as witnesses scream for the officers to go home.

After successfully separating the officers from the children, one of the (superhero) women screams at the officers.

In one of the most shocking moments we have seen, the officers get in their unmarked car and leave.

With so many children dying at the hands of police, it is more important than ever to defend the youth.

“I was scared to put up this video at first because I was not sure if it would get the cops in trouble or the community but everyone was wrong at some point .” Barber told The Free Thought Project.