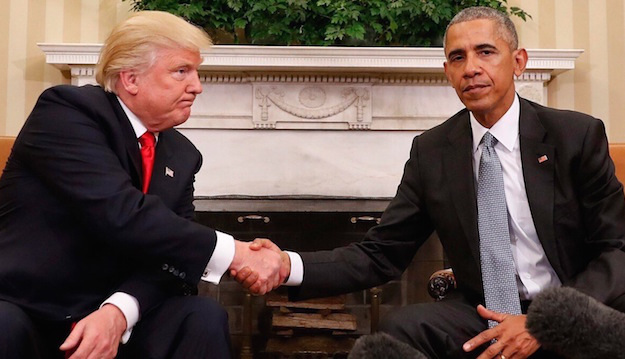 In his first interview since his title changed from “Republican nominee” to “President-elect,” Donald Trump reportedly changed his tune regarding his position to completely repeal Obamacare.

Despite the fact that Trump promised to repeal the Affordable Care Act while on the campaign trail, he told the Wall Street Journal that he intends to “preserve at least two provisions of the law” after President Obama “asked him to reconsider repealing it” during their first meeting at the White House on Thursday.

Trump reportedly listed the “prohibition against insurers denying coverage because of patients’ existing conditions,” and a “provision that allows parents to provide years of additional coverage for children on their insurance policies” as the two provisions he intends to keep when he is in office.

The question of what Trump will actually do when he is inaugurated in Jan. 2017 is a legitimate one—in the past he has voiced support for socialized healthcare. However, his presidential transition website currently says that he supports leaving healthcare specifics up to individual states.

Trump’s flip-flop is not unprecedented. In 2008, Barack Obama presented himself as the opposite of George W. Bush. Yet eight years later, the United States is still in a pattern of endless war, unconstitutional mass surveillance has increased, and Obama has sentenced whistleblowers to 10 times the jail time of all prior presidents combined.

While there is a good chance that several of Trump’s policies will fall in line with those promoted by Obama and Bush, there is a silver lining: Trump’s rhetoric towards Russia, Syria and the conflict in the Middle East differs significantly from both Obama and Hillary Clinton.

Whether you support Trump and think he will be the greatest president ever, or you hate him and think he will lead to the end of the U.S. as we know it, the fact is that expecting him to be a radical president who changes everything, simply is not realistic.