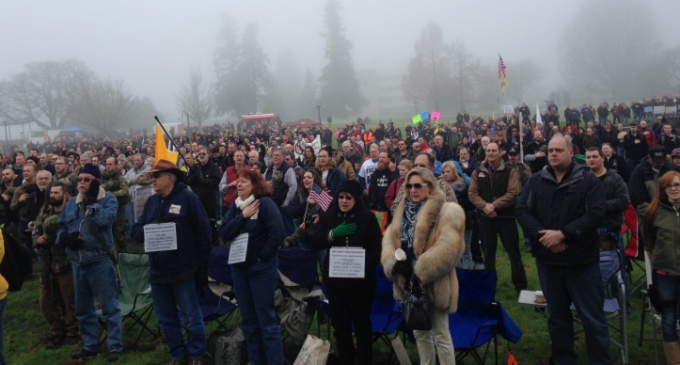 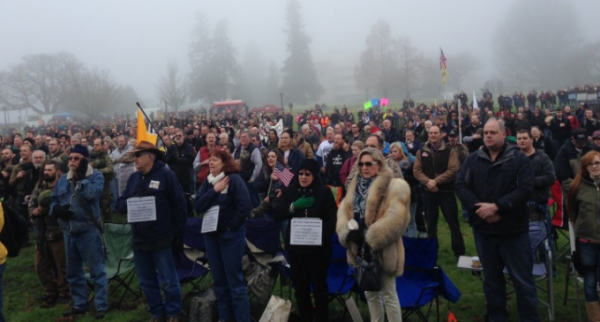 Around 1,000 gun owners rallied at the state capitol in Olympia, WA, openly armed, this past Saturday in defiance of the newly passed gun control law, I-594.

“This isn’t just a protest. We are here to openly violate the law,” stated Gavin Seim, organizer of the event, named ‘I Will Not Comply’.

At the end of the rally, gun owners burned their concealed weapons permits and signed a petition vowing to refuse to follow the new gun control law. The petition ended with the text, “We pledge our blood. We will not comply.”

This certainly isn’t the first large scale act of civil disobedience by gun owners in defiance of gun laws. Earlier this year in Connecticut hundreds of thousands of gun owners refused to send in their gun registration forms, also becoming felons. Similar numbers of gun owners in New Yorke have also refused to send in their registration paperwork and some even video taped themselves burning the forms.

Fed up with the passage of an 18½-page incoherent, rambling, unconstitutional gun control initiative that was bankrolled by billionaires, gun owners across Washington state held the largest felony civil disobedience rally in the nation’s history, brazenly titled “I Will Not Comply.” No one was hurt and no stores were looted. Between 1,000 and 3,000 lawful gun owners showed up openly armed at the state capitol in Olympia, Wash., on Saturday to defy the newly passed gun control law, I-594.

Organizer Gavin Seim made the extraordinary nature of the rally very clear, “This isn’t just a protest. We are here to openly violate the law.” Attendees publicly transferred their guns to each other in violation of I-591’s background check provisions, and some even bought and sold guns just a few feet away from law enforcement. A fire pit blazed throughout the rally, and at the conclusion, gun owners lined up to burn their concealed weapons permits. A petitionwas circulated affirming gun owners’ refusal to follow I-594, which ended with, “We pledge our blood. We will not comply.”

As the RSVPs in advance of the rally grew to over 6,000, the police – most who probably detest I-594 – decided not to enforce the law. The Washington State Patrol announced there would be no arrests for exchanging guns – not even for selling guns. Seim refused to obtain a permit to hold the rally, citing the right of people to peaceably assemble.

The rally could not be dismissed as fringe elements. Several lawmakers and lawmen spoke, including former Graham County Sheriff Richard Mack of Arizona, Washington State Rep. Elizabeth Scott (R-Monroe) and Rep. Graham Hunt (R-Orting), who sported an AR-15 during his speech. Mack advised gun owners engaging in civil disobedience to “put your sheriff next to you to keep it peaceful.” Scott defiantly explained in her speech, “I will not comply with I-594 because it is unconstitutional, unenforceable and unjust. It is impossible to enforce this law unless there is a police officer on every back porch and in every living room. So it will be enforced selectively.” She noted that Founding Father Alexander Hamilton said any law that violates the Constitution is not valid, and there is a moral obligation to disobey unjust laws.

Seim, a political activist and congressional candidate, wrote on his website, “Today I become an OUTLAW! Arrest me! I will NOT comply.” He led the rally peacefully, and at one point asked everyone attending to kneel with him in prayer. As he led the crowd in the Pledge of Allegiance, he stressed, “I am not pledging obedience to the government, it is to the Republic. We don’t ask for our rights, and we don’t negotiate for our rights. We will take America back.”

Another speaker explained what was happening this way, “We no longer consent nor comply.” Mike Vanderboegh, whose Three Percenter movement is modeled after the three percent of the colonists who fought in the American War of Independence, said that those at the rally are the resistance behind enemy lines. The resistance is also taking place in a handful of other states with strict gun control laws, where patriots are now smuggling in weapons illegally. Vanderboegh told attendees, “This is the tyranny the Founding Fathers warned us about. Tyranny can be voted into existence by a majority. We will not fire the first shot, but if need be, we will fire the last.”

Gun control zealots have finally gone too far. Gun owners are now discovering that the police in New York are using gun control laws to confiscate guns from family members within days after their owners pass away. Hundreds of thousands of gun owners in Connecticut and New York who failed to register their AR-15s earlier this year are nowfelons. Requiring the registration of guns or requiring background checks, as I-594 does, allows the government to compile a list of gun owners, which can be used later for confiscation.

If guns cause crime, then why wasn’t there a single mishap, considering there were 1,000 or so guns present and hundreds of violations of felony law taking place? Tellingly, Washington State Trooper Guy Gill predicted beforehand, “”Most of these folks are responsible gun owners. We probably will not have an issue.” The truth is, the state capitol was probably the safest place in the state last Saturday.

Patriots have had enough. The Second Amendment is gradually being eroded, state by state, and gun owners are not going to lie down and give up their arms. A handful of billionaires and elitists in blue cities like Seattle do not respect the Constitution nor represent the vast majority of Americans. Another rally in Olympia is planned for January 15, and another one in Spokane on December 20. The Second Amendment Foundation, headquartered in Bellevue, intends to sue the state over I-594, and will be lobbying the legislature to get the law changed or repealed. Washington state is now ground zero for patriotic gun owners resisting tyranny, which is at a tipping point since law enforcement does not intend to enforce I-594. What happens next?