Protest against the world’s first internet tax in Hungary 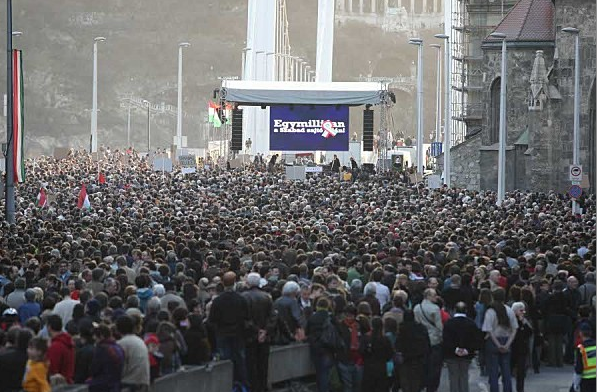 More than 10,000 people marched in Budapest on Sunday to demand the scrapping of a proposed tax on Internet usage that critics of Prime Minister Viktor Orban call his latest anti-democratic measure.

“There will be no Internet tax… we will block it,” organiser Balazs Gulyas told the crowd to cheers.

“If the tax is not scrapped within 48 hours, we will be back again,” he said.

The crowd held smartphone torches aloft outside the economy ministry in an echo of recent pro-democracy protests in Hong Kong, and held signs with slogans such as “Free Wifi! Free Internet! Free Hungary!”

Announcing the levy last Tuesday, Economy Minister Mihaly Varga said the tax — 150 forints (0.50 euros, $0.61) on each transferred gigabyte of data — was needed to help shore up the 2015 budget of one of the EU’s most indebted nations.

He also said the tax was fair because it was a shift away from phone lines and to the Internet.

Orban has been accused of flirting with authoritarianism, and organisers told AFP they believed the tax was aimed at restricting government critics who mainly use online media.

Others are concerned it will hurt small businesses and make it harder for people, particularly in poor areas, to access information and educational material.

“This is a backward idea, when most countries are making it easier for people to access the Internet,” Judit Nagy-Korsa, 55, told AFP.

The tax has also triggered alarm in Brussels. Neelie Kroes, the EU’s digital chief, tweeted that it was “a shame for users and a shame for the Hungarian government”.

Orban’s Fidesz party later proposed capping the monthly payment at 700 forints (2.3 euros, $3) for consumers and 5,000 forints for businesses, but the move has failed to calm anger.

“Orban, get lost!” chanted the crowd as it marched down the main boulevard of the capital after the rally.

The powerful Orban, 51, reelected with a second consecutive two-thirds majority in April, has faced unusual pressure in recent days after the United States issued entry bans on several government officials over suspected corruption.

The top US diplomat in Budapest warned Friday that “negative trends” such as a weakening of the rule of law and intimidation of civil society had “rapidly taken hold” in Hungary.

Among the protestors Sunday, several people held EU and US flags as well as signs reading “Mafia Government”.