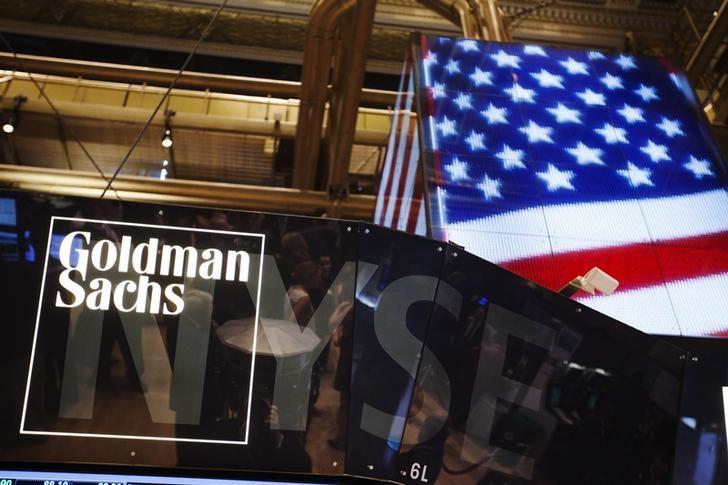 The infamous banking company, which was widely implicated in the 2008 economic crash, appears to have come out on top in the most recent U.S. presidential election.

On one hand, Goldman Sachs was hedging its bets on a Hillary Clinton victory. Considering the banking monolith was one of her top donors — and that she received harsh criticism for accepting hundreds of thousands of dollars in speaking fees from the firm — it’s clear the powerful financiers had every intent of influencing the election and politics in general.

When Clinton lost, many Americans celebrated the electoral rebuke of policies past. In contrast to many politicians, Trump aggressively criticized Goldman Sachs on the campaign trail, scolding Clinton for her ties to the company. He also criticized Ted Cruz because his wife worked for Goldman Sachs and because he received loans from the bank. By electing Trump, according to some narratives, the people rejected candidates funded by special interests in direct defiance of the established order.

But as much as Trump’s rhetoric reflected the sentiments of millions of Americans  — and though he refused donations from bankers — his actions since clinching the role of commander-in-chief have betrayed his initial position. In fact, before he even won the presidency, Trump was employing Steven Mnunchin, a former Goldman Sachs executive, as his campaign finance chairman.

Trump rewarded Mnunchin for his campaign efforts by nominating him for the position of treasury secretary. But one affiliation with a former Goldman Sachs employee admittedly does not mean Trump is siding with corporate banking interests.

Appointing several Goldman Sachs employees, however, begins to cast doubt on his priorities. This week, the President-elect added two more former Goldman Sachs employees to his administration. His top donor, Anthony Scaramucci, is a former Goldman employee who will now serve as a senior White House advisor. Dina Habib Powell, who heads “charitable efforts” for the firm, will be a “senior counselor for economic initiatives.” She previously worked in the Bush administration. 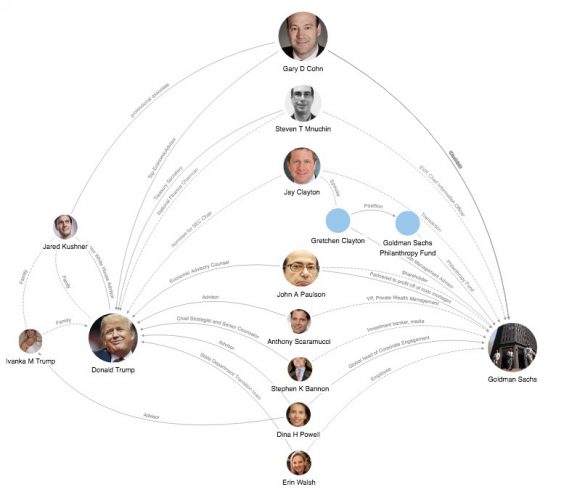 But there’s more. As the New York Daily News summarized:

Regardless of who won the 2016 election, apparently, Goldman Sachs has retained its influence — just as it did throughout the Obama administration, demonstrating the financial giant ‘hacked’ not just the 2016 election, but also the 2012 and 2008 elections, as well as others before.

Goldman Sachs employees were top donors to Barack Obama in 2008 and also contributed to his campaign in 2012. John McCain and Mitt Romney also received funding from the company.

Once elected in 2008, Obama lined his cabinet with former employees of major banking firms who cashed in on government bailouts and donated to his campaign. For example, Rahm Emanuel, who served as his chief of staff from 2008 to 2010 before successfully running for mayor in Chicago, had previously been on Goldman Sachs payroll, both during his time in the Clinton administration and when he was an elected congressman.

Obama’s administration failed to produce any significant prosecutions for the 2008 crisis and, incidentally, between 2009 to 2012, 95% of income gains went to the top 1 percent of Americans.

Though some Trump supporters might espouse argument that Trump needs experts in business and industry to truly effect change and beat back government corruption, Barack Obama already took that approach — and it failed.

Goldman Sachs leaves nothing to chance. Its employees and political action committee donate not only to presidential candidates but also to individual lawmakers and both the Republican and Democratic national committees. Former Goldman Sachs employees make up four of twelve Federal Reserve board chairman.

Considering Trump’s slew of Goldman Sachs appointments, it’s likely this established order will continue to prevail despite the President-elect’s vows to drain the swamp.

“I wouldn’t in any way say I distanced myself from Wall Street. I have very good friends on Wall Street.”

This article first appeared on theAntiMedia.org and was authored by Carey Wedler.