How Walmart Hides an Incredible Amount of Money in Luxembourg 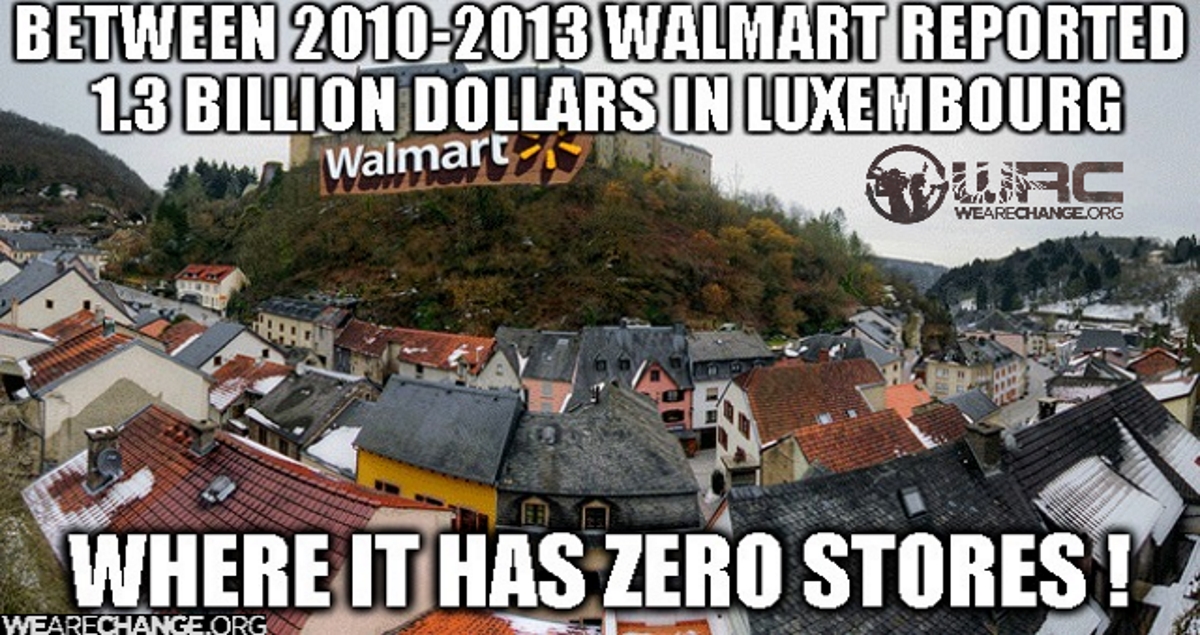 Inside Walmart’s Secret Subsidiaries In

Walmart has chipped $3.5 billion off its income tax liabilities over the past six years by stashing $76 billion in profits in offshore tax havens using a complex network of well-disguise subsidiary corporations, according to new research from one of the unions that 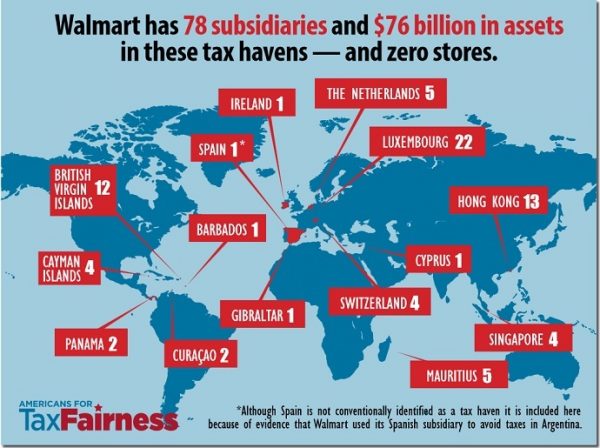 The researchers combed financial disclosure documents from the U.S. and multiple other countries to uncover 78 separate Walmart subsidiaries with names like “Azure Holdings” that do not suggest that they are connected to the Arkansas-based chain of stores. Walmart “has never listed any of them” on the subsidiaries section of a required annual corporate filing with American regulators, the United Food and Commercial Workers (UFCW)  report says. The company has no physical locations in those countries, but routes revenue from its thousands of international stores through the companies, about half of which are registered in Luxembourg, the Virgin Islands, and the Netherlands.

Walmart is a major overseas tax dodger, according to this report from Americans for Tax Fairness, a social economic think tank and advocacy group. The world’s largest retailer has stashed $64 billion worth of assets in Luxembourg, Europe’s smallest and most notorious tax haven.These assets—including cash and the ownership of real estate holdings around the world—are worth more than Luxembourg’s entire gross domestic product.?

In Luxembourg, the alleged tax-reduction strategy relies on a financial shell game. The company has shifted $45 billion in assets into its 22 subsidiaries there in the past four years, but reported only a fraction of that amount in profits. It paid a 1 percent tax rate in Luxembourg on $1.3 billion in profits from 2011 to 2013, according to the report. Like most other high-profile corporate tax avoiders, Walmart has achieved its massive tax savings through careful use of legal tax strategies. International tax rules involving loans between two different subsidiaries of the same company mean that Walmart can take out debt from itself, deduct the debt in one country, and pay low or non-existent tax rates on interest payments associated with the loan in a second country.

A company spokesman told Bloomberg that the report is inaccurate and misleading, and said the company complies fully with all the tax laws and corporate disclosure rules of every country in which it does business.

Legal though it may be, the network of holding companies and intermediaries is critical to the company. The $76 billion held in Luxembourg and the Netherlands alone is equal to nearly 40 percent of the company’s total assets worldwide, and 90 percent of the assets claimed by its international division. Researchers note that the total value of off-shored Walmart profits may be even higher, as the other tax haven countries’ public records laws do not make similar financial detail available for those operations.

Shifting corporate profits across borders is common among multinational companies in all industries, but most of the recent furor around the practice is focused on the tech sector. Brands like Apple, Google, Microsoft, and Amazon have had their arrangements in Ireland and other European tax havens called into question by American and European Union officials. In an industry where intellectual property (IP) rights are often the key to profitability, it’s relatively easy to understand how the game works. Regardless of which country served as the cradle of innovation for the iPhone, Apple can shift the IP rights to a subsidiary in a lower-tax country. Apple pays U.S. taxes on the royalties the subsidiary pays for the rights, but not on the much larger profits from selling iPhones, which remain abroad in the subsidiary. Those arrangements have come under legal scrutiny in the the past year.

Since 2011, Walmart has transferred more than $45 billion in assets to a network of 22 shell companies in Luxembourg.

Achieving the same kind of tax benefits is messier in the retail industry. Walmart is in the business of physical things, not ideas. That’s why it has to use a system of intra-Walmart loans and tax deductions to achieve the same sort of tax sheltering outcome that the techies arrive at through royalties payments. But those loans are also in Europe’s gunsights. The Organization for Economic Cooperation and Development has called for changes that would make that loan-and-deduct strategy unfeasible, according to Bloomberg.