Media Blackout: Elephant in the Room Incredible Election Fraud All in Favor of Hillary Clinton 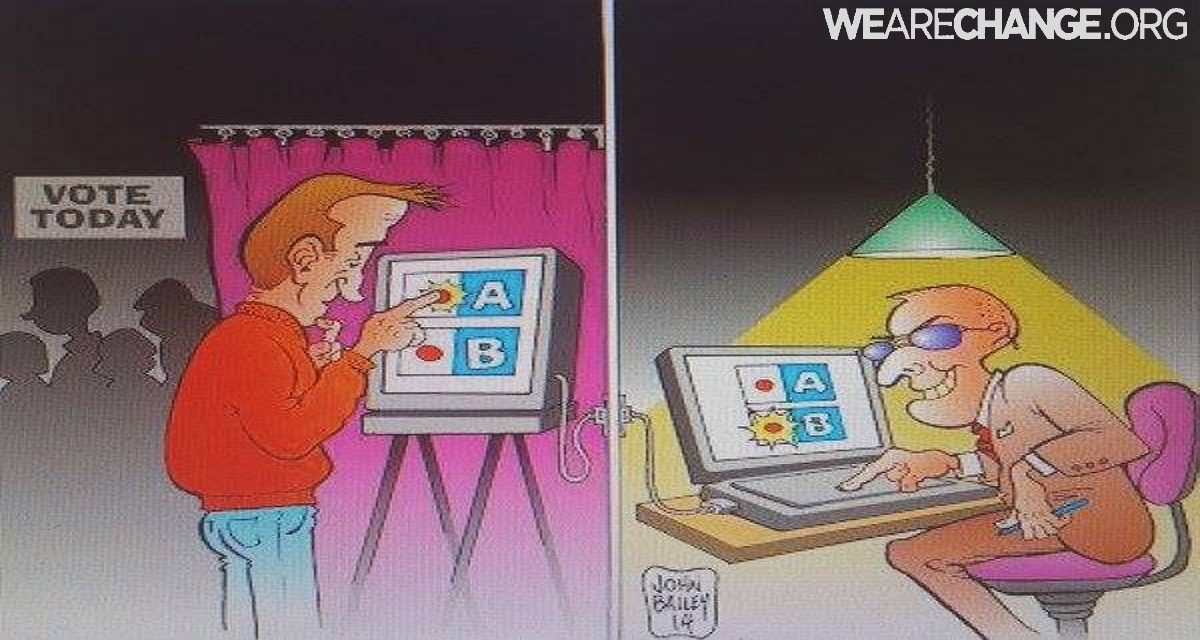 Media Blackout: an Elephant in the Room The Incredible Election Fraud of Hillary Clinton! 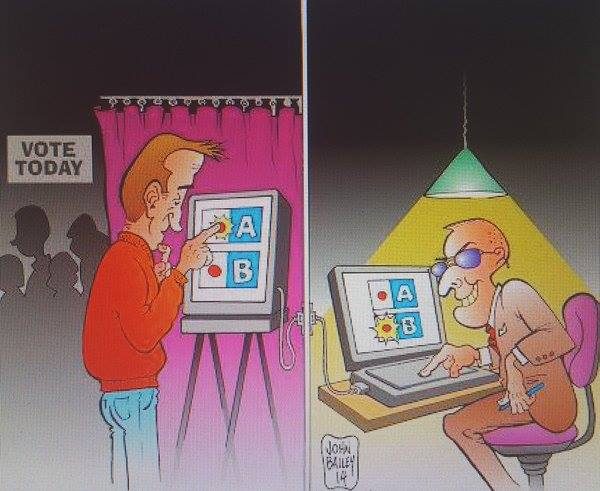 Once again the Mainstream media seems to be completely silent, no surprise really, a recurring theme this election. That theme? Election fraud, and it just always seems to be in favor of Democratic nominee Hillary Clinton, against Senator Bernie Sanders. Whether its voter suppression, changing voting registration information or poll rigging machines. This election primary at every twist and turn has had it all and we’re not even to the general election yet. A compendium of the fraud is documented below by state.

Its become abundantly clear the establishment is cheating to get their candidate Hillary Clinton elected so why are all these facts ignored about Hillary’s campaign blatantly rigging to win states? As a Counter Punch article suggest its Highly Suspicious Hillary does good in states where machines can be hacked due to flunking security test..

However that’s not the only worry this election another worry is a whopping more than 30 states offered voters online voting.  Supposedly at convenience but convenience for whom? The ones rigging it?  Any security professional will tell you online voting is not secure and can also be heavily tampered with finding various vulnerabilities in outdated software, which Wired wrote an article about how insecure online voting really is during the Utah Caucus. The Washington Post also followed up and wrote an article where several experts warn
online voting is 100% insecure.

So why then does the media or anyone for that matter refuse to acknowledge most of Hillary’s primaries and caucuses she has won against Sanders have all had voting anomalies?
Numbers that don’t match up, time and time again in the exit polls as investigator Richard Charin has found the poll’s don’t match up some by a whopping 10% or more.
Its a mockery of democracy bluntly in our faces by someone supposedly under investigation by the FBI..

To finally put the final nail in the coffin and prove the taboo that the bought out media refuses to even utter because they are too busy taking donations from the Clinton “charity” Foundation. Emphasis on the word charity because its anything but a charity organization which even Judge Jeanine Pirro has gone on the record saying “its a violation of 501(c)(3) and an illegal operation Fraud.”

The election fraud has been going on the entire race and ignored by DNC chair Hillary long time friend Debbie Wasserman Schultz.

Even two panelist at MSNBC have now admitted its rigged for Hillary. Schultz who has favored Hillary from the start and has absolutely failed to do her job, making sure this years election was fair and just and she should resign from her post immediately..

Despite what the media wants you to think, Election fraud is not some mythical monster beast, el’ chupacabra UFO or vast right winged conspiracy against Hillary Clinton its very real and its very easy to rig an election.
But don’t take my word for it, listen to the testimony of a computer programmer Clinton Eugene Curtis, who testified under oath in court and watch a Princeton University demonstration of how easy voting systems are to hack and it doesn’t require extensive technical knowledge either. Lastly watch a video by another whistle-blower who worked for Diebold, an election machine manufacturing company.

Programmer Whistleblower Testifies About Being Asked to Rig Election:

The big behemoth, is out of hiding and Its out how easy it is to rig our public office elections.
The problem for Hillary is exactly what the programmer and whistle-blower described vote flipping was caught live on TV during the Kentucky Primary on every major mainstream news TV network for America and the World to see.. Yet they have been quiet about what was witnessed..

Seemingly 5K Sanders voters vanished from the Poll numbers and Hillary was declared the winner of the Kentucky Primary Tuesday night not only were votes scrubbed but the person doing the counting Alison Grime Kentucky’s Secretary of State is good friends with Hillary. Hillary campaigned with her years prior in 2014 to unseat Mitch McConnell in the Senate she lost but when someone so close to a presidential candidate has the duty of counting votes including a friend there is no telling.. corruption knows no limits. Since Alison was so close to Hillary she should have never been allowed to do the counting someone else alternatively should have been chosen.

Prior to the Kentucky primary we had the NV primary madness but Sanders supporters have every right to be mad as our election is being stolen from us once again and its been rough. If that’s not prevalent you may have been living under a rock for Iowa’s improbable odd coin flip to win 6 precincts which according to the daily-mail was an odds out of 64-1, Boston’s poll blocking,
Arizona’s voter suppression lines, Washington’s incident where Bernie at first wasn’t going to be on the polls due to a “mistake” by the DNC, Ohio, New York, and the list goes on and on.

On top of all that, people with rich political interest Super Delegates are controlling the outcome.
A revolution is being silenced, Its the establishment not letting go and doing anything to win and stay in power but its exactly how the democratic party was setup to keep outsiders out with the Super Delegate system in the first place. So everything is working according to plan and the sheepish American public as a congressman known only as Congressman X has recently written about
In his new book are following right along with no objection therefore we are consenting to all this mistreatment and perversion of Democracy.

“Screw the next generation’ and ‘Harry Reid’s a pompous a**’: Democratic congressman X writes Anonymous tell-all book slamming ‘nation of naive, self-absorbed sheep’ as he admits he never reads bills he votes on” ~Congressman X

This all should be very worrying,
Our Democratic process is being couped before our very eyes year after year.
Voting doesn’t matter what matters is showing your presence protesting exposing the flawed voting system the rigging and following the money.
Whats worse is ex President Theodore Roosevelt warned us and if we don’t heed the warning and stand up and voice ourselves we deserve every last bit of what we get..

“If We Condone Political theft Our Civilization itself Can Not Endure.”
~Theodore Roosevelt, 1912.

As ex President Jimmy Carter said prior to any of this in 2015 “America has turned into an oligarchy with unlimited political power.”
Well his statement is being proven and that oligarchy doesn’t want to relinquish that power it seems otherwise the election rigging this year wouldn’t be so bluntly obvious. I’ll See you in Philadelphia I’ll leave you with another famous quote from Edmund Burke..

Even more then half of the American people think the system is broken.

So lets fix it? what can we do?
well for starters sign the report election fraud form here and flood the switchboards.
The balls in your court what will we be remembered for during this historic time in history?
Will we ignore the blatant displays of voting fraud and the crimes perpetrated against we the people allowing another election to be selected instead of elected? or will we fight back against the fraud? Time will tell since all major networks have decided we don’t have a right to see the remaining exit polls which given all the fraud documented below that should be very worrying.. as majority of the election results do not match the exit polls all over the country! Mike Huckabee was right when he said “Hillary Can’t Win Without Massive Voter Fraud.”

The Primaries: Hillary wins the lottery

Hillary’s “Mook Mafia” is really punishing voters as they said they would.
“Hop on that Activate and Punish those Voters.”

Hillary Confesses to Peter Paul Why She Setup a Private Server in her own words
“Why would i want to use email with all these investigations can u imagine?”

Voting fraud by state With Sourced News Articles detailing/documenting it all both Republican and Democrat 2016 Election:

Over a Million AZ Voters Disenfranchised; Sanders Voters Stand in Long Lines Only to be Denied the Right to Vote; Official Results Appear Flipped/Rigged:
http://justicegazette.org/az-sanders-wins-real-vote-while-clinton-wins-rigged-count.html

What happened in Arizona wasn’t an accident: When states make voting impossible, it’s for a very clear reason:
http://www.salon.com/2016/03/24/what_happened_in_arizona_wasnt_an_accident_when_states_make_voting_impossible_its_for_a_very_clear_reason/

Down with Early Voting!:
http://www.nationalreview.com/article/433156/early-voting-arizona-primary-results-should-put-end-early-voting

‘It was just chaos’: Broken machines, incomplete voter rolls leave some wondering whether their ballots will count:
http://www.latimes.com/politics/la-pol-ca-voting-problems-20160607-snap-htmlstory.html

How California is being stolen from Sanders right now

DELAWARE:
VOTES FOR BERNIE SANDERS DISAPPEAR IN DELAWARE: ANOTHER EXAMPLE OF A RIGGED ELECTION?:

Votes For Bernie Sanders Disappear In Delaware: Another Example Of A Rigged Election?

Voters In Florida Unable To Vote At Polling Places Because Of Technical Issues:
http://www.youngcons.com/voters-in-florida-unable-to-vote-at-polling-places-because-of-technical-issues/

INDIANA:
IS HILLARY CLINTON UP TO DIRTY TRICKS IN INDIANA? SOME RESIDENTS CLAIM THEY’RE RECEIVING PHONE CALLS SAYING BERNIE SANDERS HAS DROPPED OUT:

Is Hillary Clinton Up To Dirty Tricks In Indiana? Some Residents Claim They’re Receiving Phone Calls Saying Bernie Sanders Has Dropped Out

We Now Have A SECOND Example Of Hillary’s Iowa VOTER FRAUD! (VIDEO)

How Clinton bought the loyalty of 33 state democratic parties. Montana being only one of them

Hillary Lawyer Ejected From Court For Practicing Law Without a License:
http://www.breitbart.com/big-government/2015/09/28/hillary-lawyer-stung-okeefe-cited-not-member-bar/

Hillary’s win in Nevada invalid! Her caucus goers were not registered when voting. This is not just a scandal…its criminal voter fraud. Email Nevada election commission immediately to freeze records.:
http://investmentwatchblog.com/hillarys-win-in-nevada-invalid-her-caucus-goers-were-not-registered-when-voting-this-is-not-just-a-scandal-its-criminal-voter-fraud-email-nevada-election-commission-immediately-to-freeze-record/

Confusion on Ohio GOP primary ballot; what you need to know:
http://www.cleveland19.com/story/31408755/confusion-on-republican-ballot

VOTER FRAUD! Before The OH Primary, Voters Noticed Something STRANGE On The Ballot… Do You See It?

They ought to put the handcuffs on Ted Cruz for vote fraud
http://www.breitbart.com/2016-presidential-race/2016/04/02/roger-stone-they-ought-to-put-the-handcuffs-on-ted-cruz-for-vote-fraud/

Which One is the Fake Internet Voting Site for the Utah GOP’s ‘Online Caucus’?:
http://bradblog.com/?p=11624

Sanders beat Hillary in Washington State 72.7% to 27.1%. Washington State has 101 delegates, but only 25 have been given to Sanders!:
http://whatreallyhappened.com/category/vote-fraud#ixzz44RiaJ0nL

Bernie Sanders May Be Off DC Ballot After Democratic Party Filing:
http://www.nbcwashington.com/news/local/Bernie-Sanders-Faces-Ballot-Trouble-in-DC-After-Registration-Snafu-374042381.html

Does Someone Know Something About The Result Of The Wisconsin Primary?:
http://www.zerohedge.com/news/2016-03-30/does-someone-know-something-about-result-wisconsin-primary