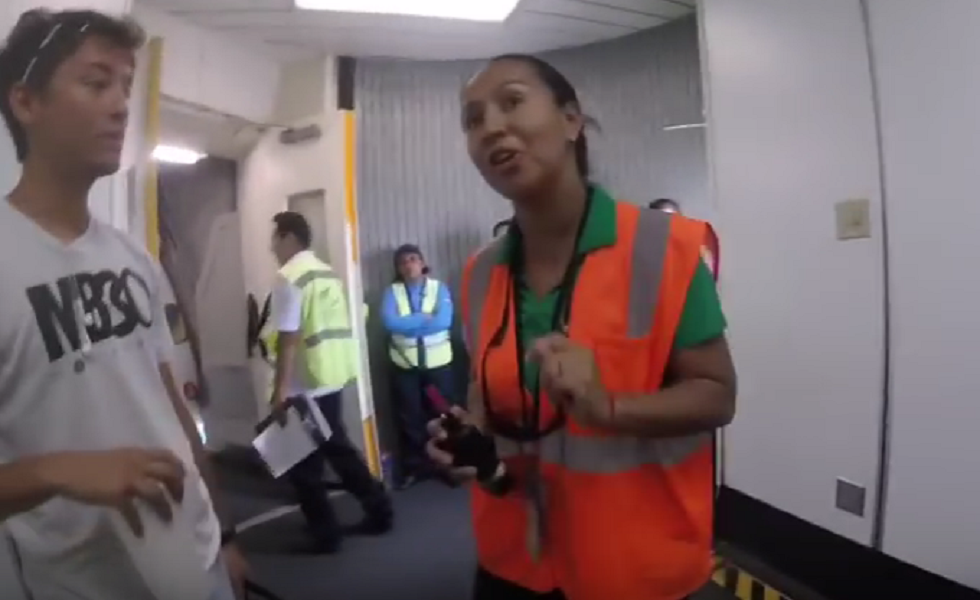 A couple who supports Donald Trump claims that they were kicked off of an airplane and assaulted for saying “let’s make America great again!” 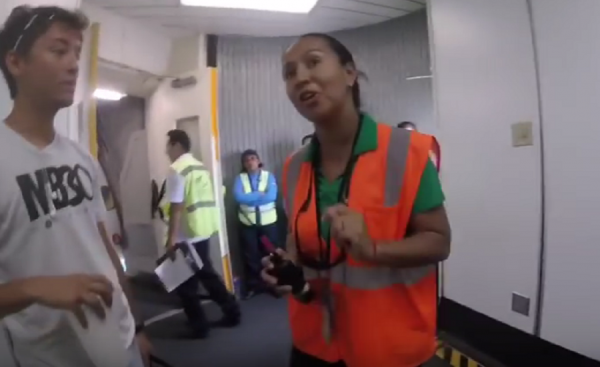 Kenny Cool being removed from airplane

On August 28th, Kenny Cool and his girlfriend Rebecca Lehmuth were trying to depart from Cancun to go home to St. Louis Airport on Frontier Airlines. As he made his way to his seat, Cool decided to joke around with other passengers by playfully quoting the Republican presidential candidate.

“I said ‘let’s make America great again’ as I was walking to my seat. Not yelling or anything like that, just talking… and people were smiling, laughing, and agreeing,” Cool told We Are Change.

He was then told that he needed to calm down by a flight attendendant, but Cool responded that he wouldn’t as he was not hurting anyone and was just excited. Apparently, the simple catch phrase made another passenger “feel unsafe” however, so Cool and his girlfriend were removed from the aircraft.

“This lady made up that I was disrupting everybody and I later found out that she said she felt unsafe with me on plane!! Laughable!!” Cool asserted.

He explained that the woman who escorted them from the plane told him, “we usually have to call the police when we escort people off but I don’t feel you are a threat so we won’t,” making the couple’s removal seem even more ridiculous.

Cool’s girlfriend filmed the encounter — which he believes agitated the airline’s employees, one of whom is seen grabbing at Lehmuth in the footage. The employee later refused to provide her name to Cool.

The incident lead to the couple’s travel being delayed an entire day, costing $500 for new flights, and his girlfriend missing work.

“So, I did it again on the next flight with no problems whatsoever!! Just more cheers!!” Cool explained. “I was was less vocal on the first plane, and only sat about half way down. The second flight I sat at the back and did it louder the whole time.”

Their initial response read in full:

“Hi – at what point does he say ‘Make America Great’ on board the aircraft? I don’t see it in the video. I only hear the woman allege that while on the jetbridge. I see no evidence in the video that he was specifically removed from the aircraft for saying that.

If there is a specific time sequence on the video where he is saying ‘Make America Great’ while he is on-board the aircraft, please let me know.

Cool explained that he did not film himself speaking on the first plane, as he was not expecting it to become such a problem.

“I only have a video of me talking on the second plane. I didn’t dream I would be thrown off for talking so I wasn’t recording the first time,” Cool stated.

We responded to Faulkner, asking if he would like to provide another reason as to why they were removed for the plane, and asking what he meant by “the behavior of the passengers as well as the behavior of the employee speaks for itself.” Further, we asked if their employee was disciplined for placing her hands on Lehmuth.

In reply, Faulkner responded with a question, asking “you think the employee placed her hands on the passenger in a threatening way?”

We Are Change responded once again by asserting that is what the passengers have alleged, and that we would appreciate a comment.

“I don’t see that on the video,” Faulkner responded flatly.

We Are Change responded by saying, “It is at 1:40 in the video. So, your response is that your employee did not touch the passenger?”

Faulkner responded, “if you need an official response, I’ll refer back to what I said earlier and leave it at that. ‘The behavior of the passengers as well as the behavior of the employee on the video speaks for itself.'”

Trump supporters may want to be aware that this treatment of passengers appears to be condoned by the airline for the next time they go to make travel plans.

UPDATE: Another passenger, using the name “Darrell Null,” who was onboard the flight reached out to Cool and provided him with a photo of the flight attendent who had the couple removed from the aircraft — and told him to keep up the good fight. He also informed Cool that he had attempted to get a photo of her name tag, but she kept covering it up. 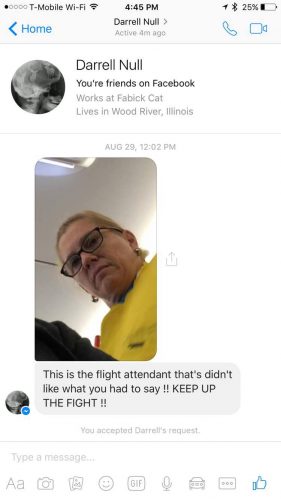 “There was not one passenger that complained, it was all the flight attendant,” the witness told We Are Change. “She didn’t like it when he said ‘lets make America great again.’ Even the other flight attendants didn’t understand what had happened. They stood behind my seat talking about having to write a report on something they didn’t understand.”

“The flight attendant made a scene over absolutely nothing is what the other passengers were saying.”

We asked if he knew Cool prior to the incident, and he explained that he did not, but he wanted to help him out after seeing what happened.

“I didn’t know him, just sat across the aisle from him and his girlfriend. I figured he would like the info so I looked him up on Facebook and passed on what I had,” the witness explained.