Watch What Happens When A Priest, A Rabbi, And An Atheist Smoke Weed (Video) 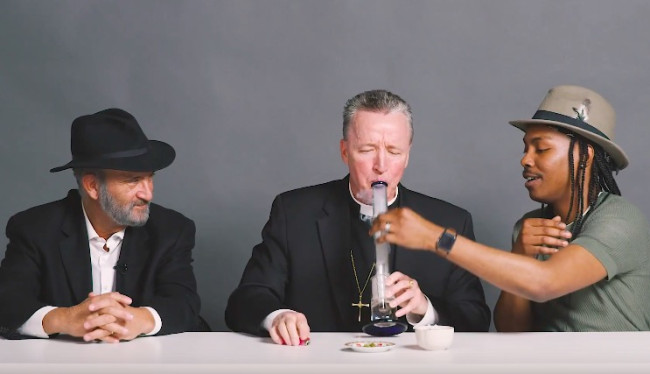 Does religion truly divide? Or can people find common ground with each other, particularly after smoking a joint?

What sounds like the introduction to a corny joke is actually the description of an event which recently took place. Fortunately for folks around the world, the meeting was recorded by Cut, which has produced numerous videos of diverse individuals getting high on marijuana (such as “Grandmas smoke pot for the first time”).

Recorded in Washington state where recreational marijuana is legal, the video features rabbi Jim Mirel, who is the Rabbi Emeritus at Temple B’nai Torah in Seattle, Rev. Chris Schuller, who once served as the rector at St. Thomas’ Episcopal Church in St. Petersburg, Florida, and a self-proclaimed atheist named Carlos, who describes himself as a “conservative homosexual.”

After hitting a bong and passing a joint around, the men use their time to discuss spirituality and religion. Once again, it’s proven that people can maintain their own personal beliefs while respecting others. Each offers a blessing or prayer to the other and they finish the experiment referring to each other as ‘friends’.

Watch as the trio’s brotherhood thickens, along with the amount of smoke in the room:

This article first appeared on TrueActivist.com and was authored by Amanda Froelich.