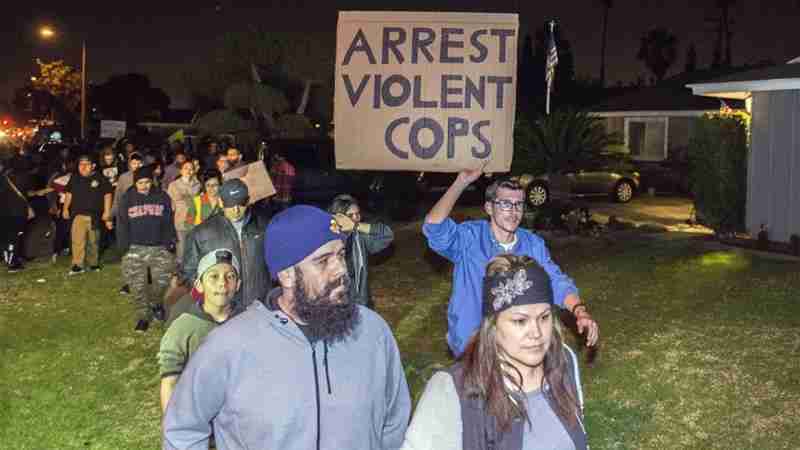 Protest have erupted after an off-duty unnamed police officer assaulted a 13-year-old boy for not getting off his lawn grabbing him and later getting into a physical confrontation with him resulting in the firing of his gun.

The incident happened in Anaheim, California around 2:40 p.m. Tuesday near Euclid Street and West Palais Road, close to Loara High School, according to the Anaheim Police Department.

“The confrontation began over ongoing issues with juveniles walking across the officer’s property,” Anaheim police said in an updated statement issued Wednesday after cellphone video of the altercation was posted on YouTube.

Which has since been removed from Youtube for “violating community guidelines.”

In the now deleted nine-minute YouTube video of the confrontation the teen can be heard making claims that the officer got upset with a girl who was walking on his lawn who called her a “cunt” the boy then came to the girl’s defense, prompting the confrontation between the two.

The boy “is alleged to have threatened to shoot the off-duty officer,” Anaheim police said. That account is disputed in the video by the boy himself and by the boy’s parents who say that the boy identified as Christian Dorscht told the cop that ‘I’m going to sue you for hitting me. I’m a minor,'” Johnny Dorscht Christian’s father said OC Weekly reported.

The unknown police officer discharged his weapon endangering dozens of teens including some who appear to be minors.

JUST IN: Hundreds protest in Anaheim after an off-duty LAPD cop grabbed a teenager and fired his weapon during a scuffle on his lawn. pic.twitter.com/ry6W56fkh1

Info regarding an off-duty #LAPD officer involved shooting on 2/21/17 in Anaheim-Your patience is appreciated as the investigation continues pic.twitter.com/fbkeum3wS5

“You’ve been resisting this whole time,” the man told Christian, who can be seen in the video clutching the youth and refusing to let go. “Punch a kid in the nuts, that’s a little pussy move,” Christian responded. “Let me go, for the last time!”

A taller boy then tries to break the officer’s grip. While another boy rushes the officer and tackles him into a small hedge, still holding the 13-year-old.

Then in a matter of a few seconds, the officer, with one hand still on the 13-year-old, reaches into his waistband and pulls out a handgun.

The person recording the video backs away, and the view of the confrontation is temporarily blocked.

A single gunshot is then heard.

The officer can be seen pulling the teen over the hedge as the person recording and other witnesses run away from the scene. Kneeling over the teen, the officer appears to tell the older man with the crutch to call 911.

Police made it clear that “No one was struck by the gunfire, and the officer admitted firing the weapon.”

The officer was placed on administrative leave and was not arrested, according to an LAPD statement issued Wednesday night despite assaulting a 13-year-old boy KTLA5 reported.

The protests resulted in the unknown cop’s house being vandalized including having rocks thrown at the windows and his garage tagged with graffiti.

While the Anaheim Mayor Tom Tait said the city is committed to a thorough investigation.

“Like many in the community, I’ve seen the video and I’m very concerned about what it shows,” Tait said in a released statement. “Anaheim is committed to a full and impartial investigation. Our city will move forward without delay.”

What do you think about a cop attacking a teen for walking on his lawn then discharging his firearm? Let us know in the comment section below!

UPDATE: 11:11 A.M. EST – Youtuber Philip DeFranco broke down the situation pointing out that one of the kids may have been reaching into his pocket to grab a weapon noting that regardless it doesn’t change the negligence of the officer firing his weapon either through negligence or shooting a warning shot.