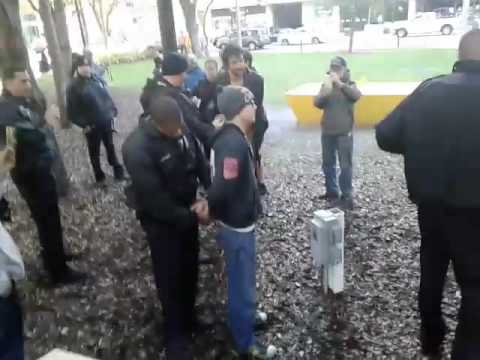 A group of peaceful volunteers for the Food Not Bombs activist campaign feeding the homeless were arrested on camera for the “heinous” crime of sharing food.

Yes you read that right, in two separate videos Tampa Police Department officers are seen arresting Food Not Bombs activists, as they fed the homeless and hungry in public areas. Police say the seven volunteers were arrested for serving food without a permit, though Food Not Bombs maintains it did nothing wrong and have served food in the same location without a permit hundreds of times with no interference from law enforcement, according to CLTampa.com.

In a statement issued to local media, the Tampa Food Not Bombs chapter stated that it will continue to feed the needy despite threats from the city and local police.

“[Food Not Bombs] has no plans to stop sharing food with the homeless and hungry and will continue to defy unjust laws that criminalize compassion and mutual aid,” the statement read. “We intend to expose the city’s cruelty in the face of thousands in our community who are struggling with issues of food insecurity, mental and medical health issues, poverty, and homelessness.”

“Compassion should never be criminalized,” the statement read.

The arrests are not coincidentally before Monday night’s college football national championship game between Clemson and Alabama.

“We intend to expose the city’s cruelty in the face of thousands in our community who are struggling with issues of food insecurity, mental and medical health issues, poverty, and homelessness,” a spokesperson for the group said in an email. “If the city will not address these problems, the least they can do is not get in the way and stop others from addressing these needs. Compassion should never be criminalized.”

Meanwhile in the UK, a woman was jailed for the heinous crime of being homeless and begging. Jenny Dinmor was arrested for begging and charged on two counts of begging at the Bath Magistrates Court. Dinmor faces 12 weeks in prison, 6 weeks for each count she was also ordered to take part in a rehabilitation activity and if that’s not ridiculous enough to pay a £115 victim surcharge fine.

As if anyone wants to be homeless begging out on the street. As the activist in the above video from Tampa said – people over profits!