WATCH: Protests Emerge Across The U.S. Against Syria Airstrikes 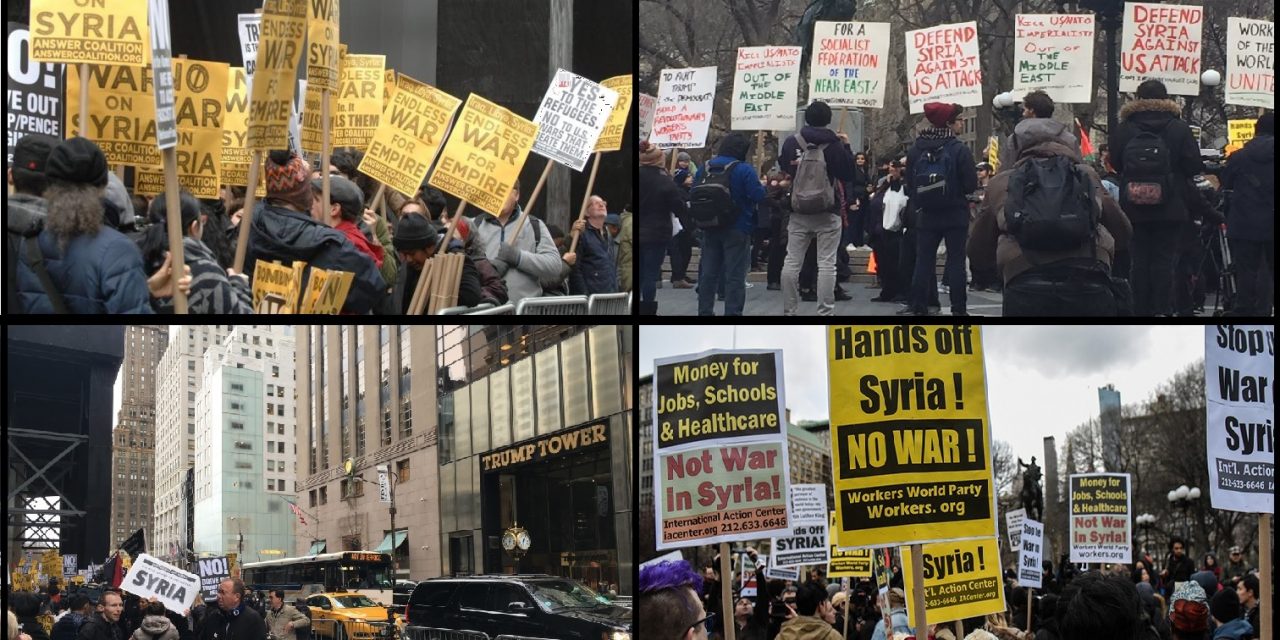 Thousands took to the streets to protest against the U.S. airstrikes against Syria yesterday. Protesters from all across the country made it clear that they will not stand for U.S. aggression in Syria, in a direct clash with the recent actions ordered by the Trump administration.

One protester was interviewed and said:

“We don’t even have concrete evidence that it was Assad with the Gas attack… They’re not solving anything with just bombing more people… More people will die from this.”

Furthermore, the protester claimed that the U.S. had lied about previous attacks.

Another protester that was also interviewed said:

“[The] United States created Al-Qaeda before and then created Isis. If they want to fight Isis they [should] let the Syrian army fight it.”

Pictures have emerged from all over social media. They depict an angry resistance against the war in Syria and the Trump administration for perpetuating the conflict by conducting more airstrikes on Syria. The latest airstrike was carried out today, which means we will probably see more protests emerge as the situation in Syria continues to unfold.

"We make the refugees we ban."

As the U.S continues to intervene in Syria, the majority of protesters expressed their concerns saying that money spent on these weapons of mass destruction, should rather go towards funding, “jobs, schools and healthcare.” The tomahawk missiles that struck Syria in the first wave of airstrikes reportedly cost $60 million USD in total as one tomahawk missile is valued at approximately $1 million USD.

There was also a smaller protest yesterday outside of the White House, which was photographed and posted on Senator Bernie Sanders’ Twitter page. Senator Sanders reportedly said:

“I’m deeply concerned that these strikes could lead to the United States once again being dragged back into the quagmire of long-term military engagement in the Middle East,” furthermore asserting “that it’s easier to get into a war than get out of one.”

Sanders had previously run for President and lost to Hillary Clinton in the nomination process.

https://t.co/G5SP0y2JUr Protesters gather outside The White House to protest against US military action in Syria #feelthebern pic.twitter.com/6u0gM2i25B