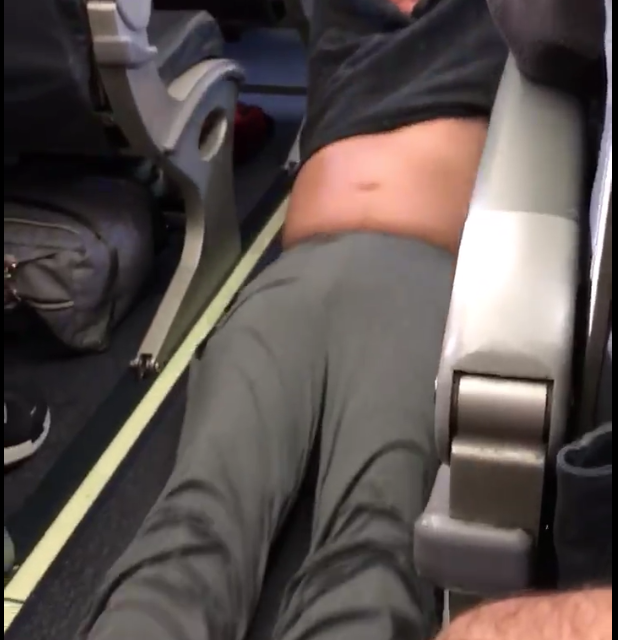 A screaming man was knocked unconscious and forcibly dragged off an overbooked United Airlines Chicago flight by cops while fellow passengers yelled at what they deemed heavy-handed and brutal behavior.

The shocking video shows three officers filmed yanking the man from his seat in the process bashing his head against an armrest and dragging him down the aisle as he bled from his mouth.

An alternative angle shows the scene much more clear and we can place a bet that a hefty lawsuit will come out of this one.

United Airlines Overbooked #Flight3411 And Decided To Drag A Random Passenger Off the Plane Who Was A Doctor..pic.twitter.com/ecbGvmuYE8

The man claimed to be a doctor and said he needed to see patients the next morning. He was one of four randomly selected by United to leave the 5.40pm flight from Chicago to Louisville the Courier-Journal reported.

United had asked for volunteers to give up their seats for $800 to stay in a hotel and fly the next day. Four random passengers were asked to get off so airline staff could get to Louisville to pilot a flight the next day.

All the passengers refused and the airline manager then boarded the plane and said they would randomly select four people. One couple left the plane at Chicago O’Hare peacefully, but the Asian man who was who was traveling with his wife refused to leave the plane.

That’s when law enforcement was called to remove the man by force.

Passengers screamed in protest: ‘my god what are you doing’ one woman said, ‘this is wrong’ another passenger said as the situation unfolded. The Asian man appeared to go limp after being slammed against a headrest and one passenger said he was ‘knocked out’.

The video was taken by a passenger on the flight named Audra D. Bridges who told the news agency her account of what happened.

“Passengers were told at the gate that the flight was overbooked and staff appealed for one volunteer to accept $400 and a hotel stay to take a flight at 3 p.m. the following day,” Bridges said.

All the remaining passengers were then allowed to board the flight only to be told that another four people would have to give up their seats for United staff in Louisville.

United said that four stand-by staff needed to be in Louisville for a flight the next day and the plane would not take off until they had seats.

Even when the offer was increased to $800, no one volunteered.

At this point, Bridges said that a manager came on board the flight and stated four ‘volunteers’ would be randomly selected by the airlines’ computer system.

United Airlines said in a statement:

“Flight 3411 from Chicago to Louisville was overbooked,” the spokesperson said. “After our team looked for volunteers, one customer refused to leave the aircraft voluntarily and law enforcement was asked to come to the gate.

“We apologize for the overbook situation. Further details on the removed customer should be directed to authorities.”