“We Do Not Seek War,” Says President Who Just Started a War 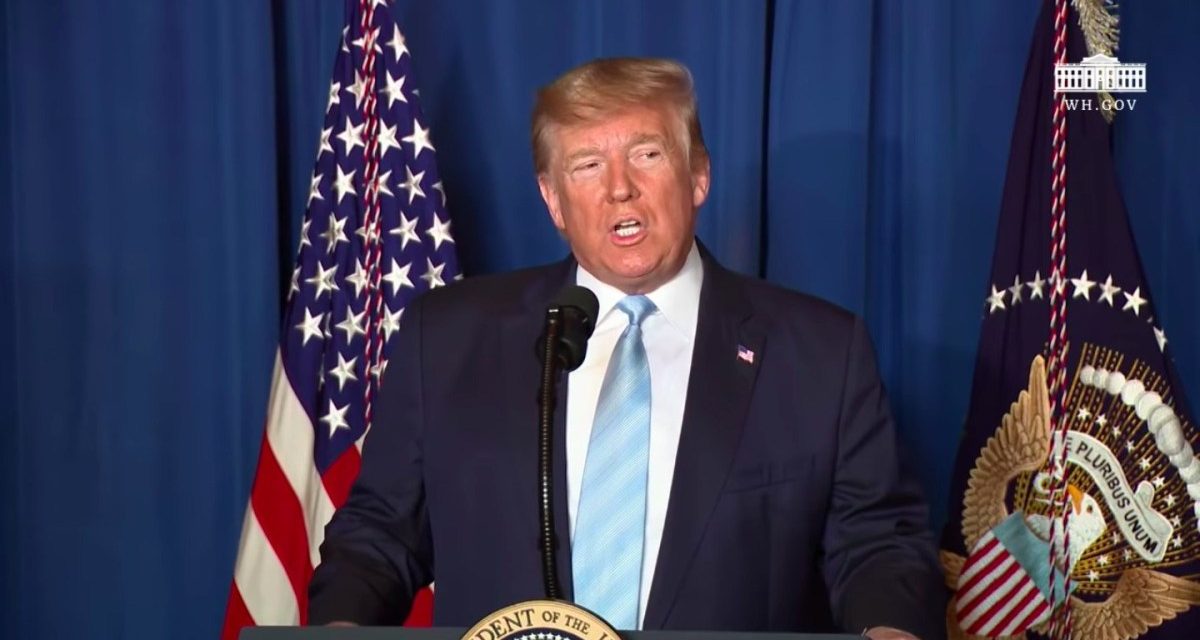 President Trump has been steadfastly assuring the world that the United States government does not wish to start the war it has already started by assassinating Iran’s top general.

“We are a peace-loving nation and my administration remains firmly committed to establishing peace and harmony among the nations in the world,” Trump said in a speech at his luxury Mar-a-Lago getaway on Friday. “We do not seek war, we do not seek nation-building, we do not seek regime change, but as president I will never hesitate to defend the safety of the American people.”

“We took action last night to stop a war. We did not take action to start a war,” the president added.

To be clear, no part of this is a thing. Assassinating a nation’s most senior military official, and then claiming that you do not wish to start a war with that nation, is not a thing.

America is at war with Iran currently. What that war will end up looking like is anyone’s guess right now, but there is no question that a war has been initiated. If any nation had assassinated a top US general via airstrike and then openly admitted to it, the US would immediately be at war with that nation. Without question. An extreme military retaliation would be in the works within minutes of the announcement, and the entire political/media class would fully support that retaliation in whatever form it took.

This may come as a surprise to some Americans, but that same principle holds true for other nations as well.

“His departure to God does not end his path or his mission, but a forceful revenge awaits the criminals who have his blood and the blood of the other martyrs last night on their hands,” Iran’s supreme leader Ayatollah Ali Khamenei said in a statement on Friday.

And, I mean, of course. Of course “forceful revenge” from Iran is in the mail. Only by the most bizarre American exceptionalist mental contortions could this not be blindingly obvious. The question isn’t if Iran will retaliate with extreme force, but when and where. Nobody with any functioning matter between their ears would expect anything else.

We're at war with Iran. It's not a potentiality any more. It just happened. Adjust your frame of reference accordingly

And of course the US government is now spouting completely unsubstantiated claims about General Qassem Soleimani, and of course the mass media are uncritically repeating those claims as fact, and of course the propagandized masses are regurgitating what their perception management screens have told them to believe. Trump administration officials are claiming without any evidence at all that Soleimani was plotting “imminent attacks on American diplomats and military personnel”, even going so far as trying to marry him to the 9/11 attacks and a host of other unsubstantiated excuses.

Anyone who believes any of this is a brainwashed imbecile. Because of the US government’s extensive history of lying to manufacture support for preexisting military agendas, the only sane response to unsubstantiated US government claims about targeted nations is absolute skepticism. That skepticism should remain in place until mountains of independently verifiable proof of the claims made has been provided. This is the only acceptable level of evidence that critical thinking permits in a post-Iraq invasion world.

This should be extremely obvious to everyone. The fact that it isn’t is the result of generations of increasingly sophisticated propaganda manipulating the way people think about war, what it is, and how it works. My social media notifications are currently flooded with Trump supporters assuring me that Soleimani was a “bad guy” and Trump is therefore a “good guy”, and that assassinating the top military official of a sovereign nation is a perfectly sane and acceptable thing for a government to do.

“I Oppose Interventionism, But-” But Nothing. Stop Being A Pro Bono CIA Propagandist.

Wrote this last year about apologists for Trump's warmongering, and it applies equally to the "but Soleimani was a BAD GUY!" propaganda line they're regurgitating today.https://t.co/GICxN6pzVW

Don’t do this. Don’t advance war propaganda narratives for the US government.

Those who spread war propaganda are participating in that war just as much as those who actually go and fight in it, only they’re playing a far safer, far more cowardly, and far more dishonest role. A man who flies to Iran and murders Iranians with firearms is at least engaging in the war in a way that he will have to grapple with existentially for the rest of his life. A man who regurgitates Fox News propaganda on Twitter will then eat a pizza, have a wank, go to bed and sleep like a baby. But they both facilitated mass murder based on lies and American supremacist imperialism.

The war that Trump has started must be opposed forcefully and aggressively. Do everything you can to wake people up to what’s going on. This could get very, very ugly.

I’m going to keep following this important story and publishing regular updates as it unfolds. I encourage everyone else to pay close attention to it as well. Trump’s war with Iran should be front and center for everyone who cares about humanity.