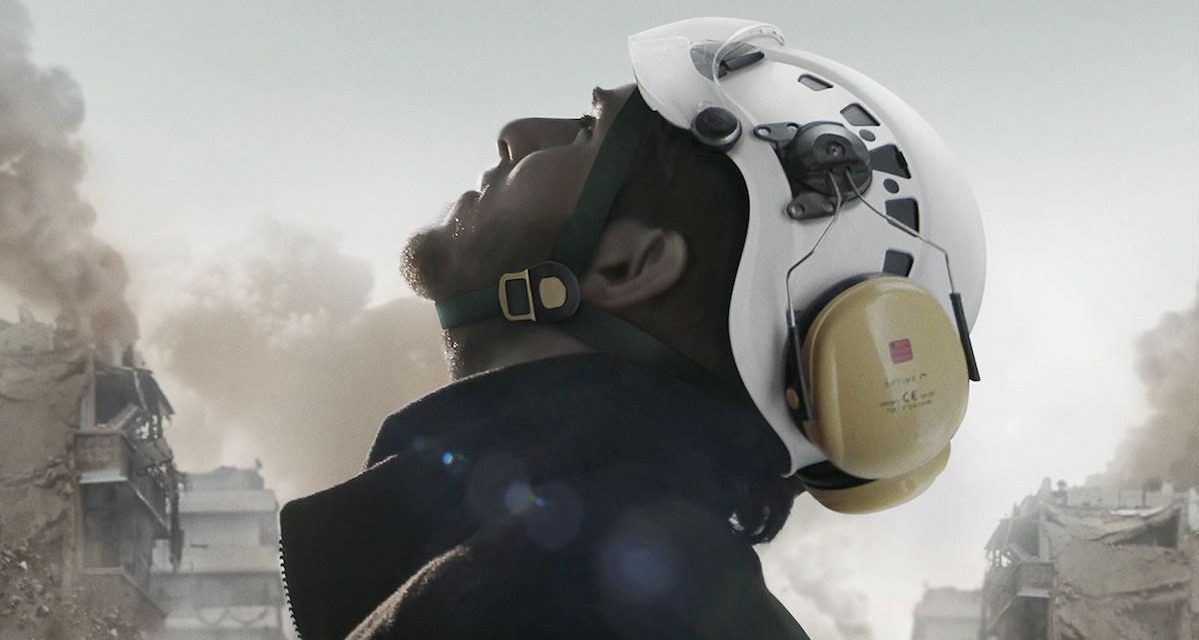 LOS ANGELES (WeAreChange) — Syrian cinematographer Khaled Khateeb, who helped produce the Oscar-nominated propaganda documentary short The White Helmets, has reportedly been barred from entering the United States after officials found “derogatory information” about him. Consequently, the 21-year-old will not be attending the 2017 Oscars to be held in Los Angeles.

Khateeb was scheduled to arrive Saturday in Los Angeles on a Turkish Airlines flight departing from Istanbul. But his plans have been upended after U.S. officials reported finding “derogatory information” regarding Khateeb.

Derogatory information is a broad category that can include anything from terror connections to passport irregularities. Asked for comment, a spokeswoman for the Department of Homeland Security, Gillian Christensen, said, “A valid travel document is required for travel to the United States.”

In an official statement released by the White Helmets on Saturday, the organisation made out the situation as being the fault of the Syrian “regime” yet earlier contradictorily claimed that “we won’t be at the OSCARS due to intensity of work” and that “our priority continues to be helping civilians & rescue operations in #Syria.”

“The Syria Civil Defense will not be attending the Oscars in Los Angeles,” the statement read.

“Raed Saleh, Head of the Syria Civil Defense is the holder of US visa. Raed was planning to attend but can not make it, the intense air strikes across the country mean he must focus on work inside Syria.

“Khaled Khatib, a Syria Civil Defence volunteer and cameraman on the film, was due to attend. Unfortunately Khaled Khatib was not able to travel to the Oscars due to his passport being cancelled by the Syrian regime, despite having been issued a US visa specifically to attend the awards ceremony.

“The Syria Civil Defence are grateful for the platform the film ‘The White Helmets’ is providing for their humanitarian message to reach around the world.

“The Syria Civil Defence wants to thank all the people around the world that have sent messages of support for their Oscar nomination.” 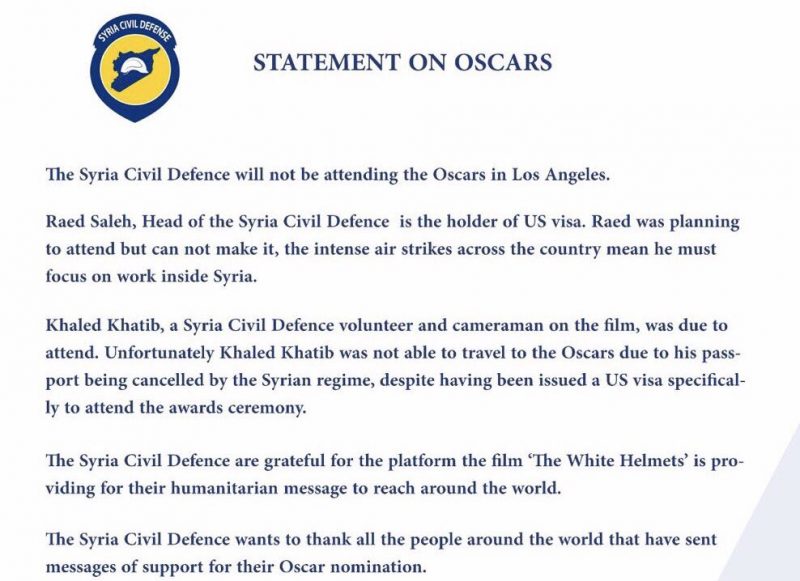 After 3days at airport, not allowed to travel to #oscars2017 – had US visa – but passport not accepted. Sad, but important work to do here.

I get US visa but I haven’t traveled to U.S At all and I won’t travel to OSCAR due to intensity of work, our priority is helping our people.

The white helmets documentary produced by @netflix was nominated for oscar!! I’m so proud to have filmed this film and for this nomination. pic.twitter.com/Lk3AL4fsEi

The 40-minute long Netflix documentary, which is now being turned into a feature-length film by George Clooney, portrays the White Helmets known as ‘The Syrian Civil Defense’ dramatically rescuing 60,000 people from bombed-out buildings in war-torn Syria.

However, as independent Middle East-based journalists such as Eva Bartlett and Vanessa Beeley have found through extensive investigations and on-the-ground reporting, the White Helmets “civil defense organisation” is nothing less than a terrorist-supporting, US and British-backed group of imposters, who, as Bartlett said are “white helmets by day and terrorists by night.”

Interestingly, a major shareholder in Netflix just so happens to be the Capital Research Global Investors who host a number of luminaries of the military industrial complex on its books including Lockheed Martin and Boeing. In 2015, George Soros, the infamous billionaire globalist hedge-fund manager, bought up 317,534 shares in Netflix reported to be worth $32.79 million.  In 2016, Soros curiously dissolved those shares.

It is alleged that the White Helmets group has been handed $60 million from US AID, the UK Foreign Office and various EU nations such as the Netherlands to be the PR front for Western-backed propaganda about the Syrian conflict.

Despite the fact that they were created and are still generously funded by NATO members states, particularly the US and UK, the White Helmets’ official statement still deceitfully claims that they are somehow “fiercely independent” and “have accepted no money from governments, corporations or anyone directly involved in the Syrian conflict.”

Despite the fact that they are a NATO construct embedded with Al-Nusra front, ISIS (a US-created terror group) and affiliated with the majority of US-backed terrorist brigades infiltrating Syria, the group claims to hold the ground of neutrality by deceitfully declaring they are not “tied to any political group in Syria, or anywhere else”

Beeley comments regarding the below video:

“The following video is a compilation of the testimony from Syrian civilians released from a five-year incarceration in East Aleppo, under a terrorist regime and occupation led by Al-Qaeda factions (aka Nusra Front and assorted extremist militant brigades), also funded by the US, NATO and Gulf states. These testimonies attest to the US and UK construct, the White Helmets, being nothing more than ‘Nusra Front’s civil defense’.”

“The Syrian Arab Red Crescent also told 21WIRE editor, Vanessa Beeley, that they had never seen the White Helmets conducting humanitarian work in East Aleppo, either during or after occupation by the extremist groups.”

In late 2016, the White Helmets produced a staged ‘mannequin challenge’ propaganda video promoting their ‘rescue work’, which after backfiring massively was quickly deleted from the group’s YouTube account and all references promptly removed from Twitter. The footage sparked questions as to the legitimacy of the group’s other regularly posted videos which are deemed to also be staged for the purposes of propaganda promotion.

The video portrays ‘victims’ and ‘rescuers’ posing motionless for several seconds before the fake rescue operation begins immediately followed by the agonized screams of an ‘injured’ actor.

“Are we finally seeing vindication of the two years of independent investigation into this terrorist-supporting group of frauds, whose creators have milked the general public with a myriad of glossy, expensive marketing campaigns, designed to appeal to our better nature and to implicate the general public in crowd funding for terrorism inside Syria?” asks Beeley.

“Perhaps this Oscar bid for the White Helmets is an indication of the level to which the ruling elite have stooped to maintain their facade, which has been eroded so successfully by the few brave people who have taken a stand against their global machinations, such as Tulsi Gabbard and Carla Ortiz, both of whom potentially risk their careers to present the truth of what is actually happening inside Syria.

“Has the steadfast bravery, courage and resistance of the Syrian people, the majority of whom are fully supportive of the Syrian state and the Syrian Arab Army, finally demolished the wall of lies that has prevented their voices being heard?

“History will show that Hollywood narrowly avoided inviting Al-Qaeda, terrorist affiliates onto its red carpet…truth to power has once more emerged victorious as it did in the prevention of the Nobel Peace Prize for this same organization of criminals, thieves and sectarian violence perpetrators and supporters, the not-so-white White Helmets. The ghosts of East Aleppo.

“The White Helmets propaganda film may still be awarded the Oscar, but it will be a hollow prize when the recipients have been denied entry into the country of origin. It may also be used as further leverage to demonize the Trump administration, how dare they “ban” the “noble humanitarians”. Of course, that will be another straw man attack, as the oft-citedted ban was lifted prior to the White Helmets being denied entry. It is worth noting that it is the same Democratic partisan, cartel of propagandists, iconizing the White Helmets, who are demonizing Trump. Coincidence?

“If the Netflix documentary does win the Oscar, it will be fascinating to watch the director, Orlando von Einsiedel and producer, Joanna Natasegara explain away the claims that the “saviours of all humanity” are just “too busy” to attend, despite Khateeb’s euphoric declarations of his forthcoming attendance, all over his social media accounts.

“The truth is revealing itself bit by bit and when the White Helmets fall, much of the NATO and Gulf State war effort in Syria will be damaged beyond repair.”