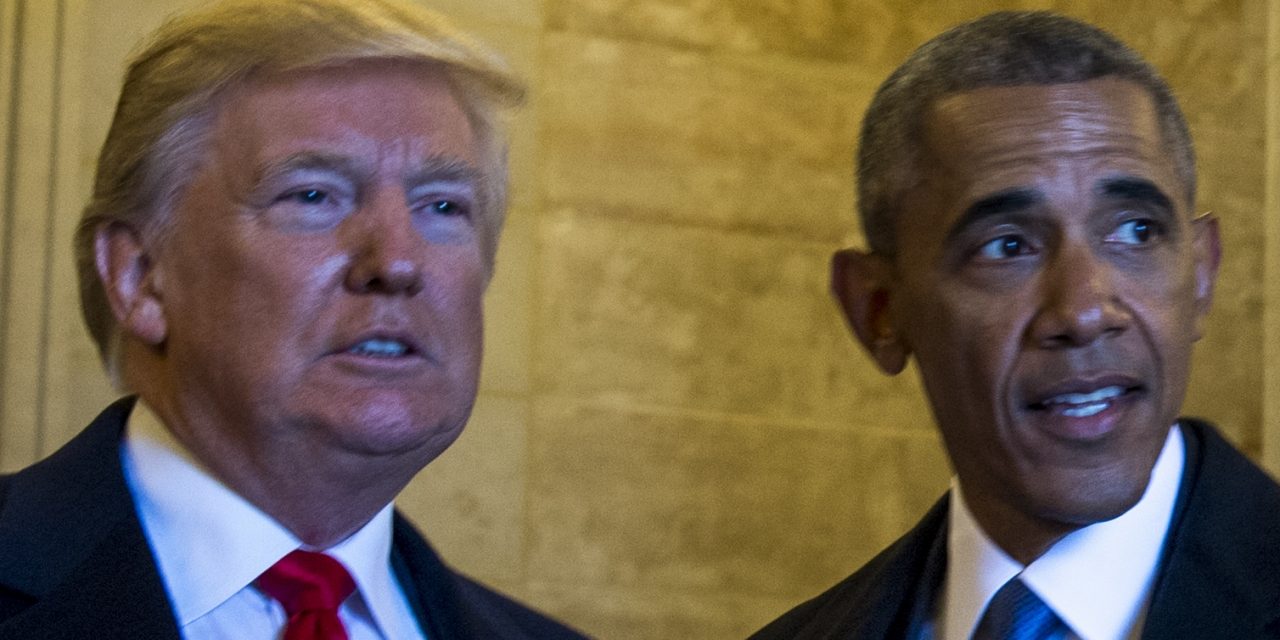 With Trump so far providing no follow up comments to his dramatic accusation from Saturday morning that Obama bugged the Trump Tower in October 2016, spending Saturday night at Mar-A-Lago where he had dinner with AG Jeff Sessions, he resumed the attack on Sunday morning when he went after the Democratic National Committee and President Obama in a series of early morning tweets.

In his first tweet, the president questioned rhetorically whether the DNC refused to let the FBI have access to its servers (as FBI director Comey confirmed previously, the DNC did in fact do that) after it learned it had been hacked: “Is it true the DNC would not allow the FBI access to check server or other equipment after learning it was hacked?” Trump asked.  “Can that be possible?”

Is it true the DNC would not allow the FBI access to check server or other equipment after learning it was hacked? Can that be possible?

He followed up with questions about President Barack Obama’s own ties with Russia, referencing the infamous March 2012 “hot mic” video in which Obama told former Russian President Dmitri Medvedev he would have more “flexibility” after his re-election: “who was it that secretly said to Russian President, ‘Tell Vladimir that after the election I’ll have more flexibility?'” he tweeted.

Who was it that secretly said to Russian President, "Tell Vladimir that after the election I'll have more flexibility?" @foxandfriends

However, the first concrete sign that Trump intends to keep the pressure on Obama, came on Sunday morning from Sean Spicer, when the White House press secretary tweeted just before 9am Eastern that as part of investigations into Russian attempts to influence the election, the White House is requesting that the congressional intelligence committees probe whether “executive branch investigative powers were abused in 2016″, a strong hint that Congress should look into Obama bugged Trump. 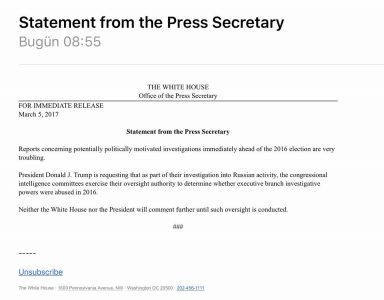 The White House spokesman then said that Trump is requesting that congressional committees determine whether “executive branch investigative powers were abused in 2016.”

(2/4) President Trump is requesting that as part of their investigation into Russian activity, the congressional intelligence committees

(3/4) exercise their oversight authority to determine whether executive branch investigative powers were abused in 2016.

And, hinting that a voluntary gag order will be implemented, Spicer said that “neither the White House nor the President will comment further until such oversight is conducted,” Spicer added.

(4/4) Neither the White House nor the President will comment further until such oversight is conducted.

To be sure, there was immediate pushback from the punditry:

With voter fraud and now wiretapping, there's a pattern going on:

2. Announce investigation to prove it

In any case, while Democrats have accused Trump of fabricating his accusation that Obama bugged the president’s phones to deflect from the media’s full court press to suggest that Trump’s aides had ties to Russia, it now appears that Trump is pushing back with demands of a similar probe, focusing on alleged “executive power violations” by Obama.

While it is unclear how far either probe will go, the stakes have suddenly soared, escalating to the very top with either the current or the former president finding themselves with much to lose, if the other side’s accusations are confirmed.