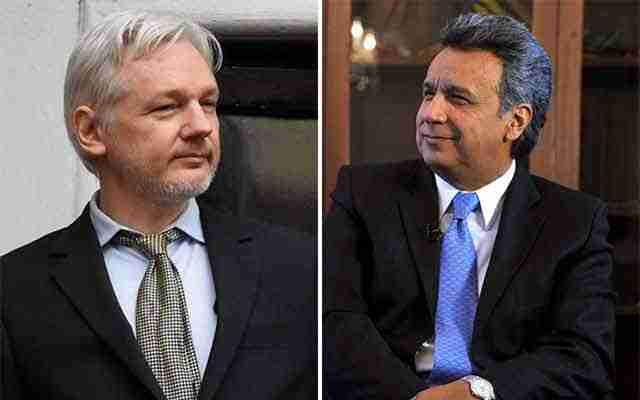 Wikileaks founder Julian Assange may be safe from eviction as Ecuadorians narrowly elected ruling PAIS Alliance party candidate Lenín Moreno over conservative Guillermo Lasso. Lasso said that he would end Assange’s asylum in the Ecuadorian embassy in London if elected.

The election is not over yet however, as Lasso has contested that electoral fraud may have given his opposition an edge.

Moreno so far has won the South American country’s presidential election with 51% of the vote, according to the National Electoral Council.

Moreno had secured 51.07% of the votes compared to Lasso’s 48.93% with just over 94 percent of votes counted according to the National Electorial Council, SkyNews reported.

The two were virtually tied in the polls so much so that Lasso sought a recount as his supporters took to the streets in protest. Lasso has argued that election fraud was in favor of his rival, the BBC reported.

Lasso also tweeted that “we’re not stupid, nor are the Ecuadorean people” and called on them to “peacefully defend their votes”.

Moreno’s win likely ensures that Assange will be able to continue the unusual arrangement at the cramped London embassy.

President Rafael Correa urged voters to support his “Citizens’ Revolution” by electing Moreno, who he said will continue policies to support the poor.

Moreno was the former vice-president of Ecuador.

Assange had been threatened with eviction from the country’s embassy in London by the opposition candidate Lasso who said that he would help him find asylum elsewhere.

“We will ask Mr. Assange, very politely, to leave our embassy, in absolute compliance with international conventions and protocols,” Lasso said in an email with the Miami Herald adding, “We vow to take all the steps necessary so that another embassy will take him in and protect his rights.”

Assange tweeted his congratulations to Moreno and officials in Ecuador, including Rafael Correa, the current president of Ecuador. “I cordially invite Lasso to leave Ecuador within 30 days (with or without his tax haven millions),” wrote Assange.

Although Moreno backs Assange’s continuation at the London embassy, he said that he would ask him to “be very delicate when he addresses international politics, especially regarding countries with which we have good relations,” reported Latin American news outlet teleSUR.