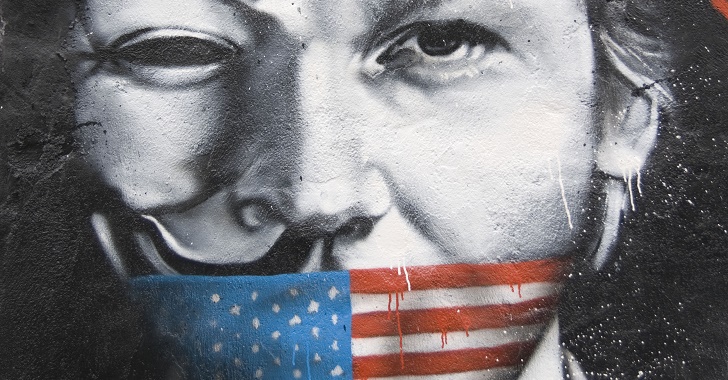 Moments ago, Wikileaks tweeted that as a result of a segment airing on CNN, the whistle-blowing organization announced it has “issued instructions to sue CNN for defamation.”

Wikileaks was referring to a segment in which CNN had the ex-Deputy-Director of the CIA “falsely calling Assange a ‘pedophile.’ 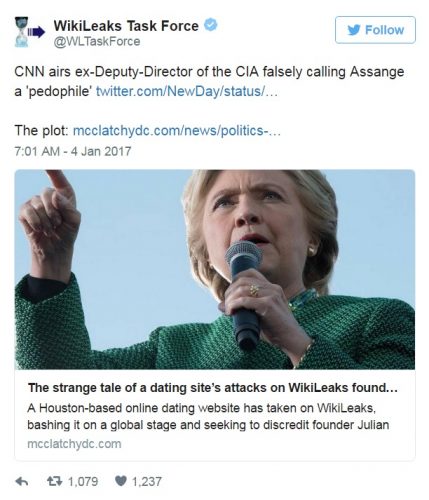 As indication of the “plot line,” Wikileaks provides a link to the following McClatchy article, which lays out “the strange tale of a dating site’s attacks on WikiLeaks founder Assange,” which writes the following:

“But the attention grabber is the Houston-based company’s target: Julian Assange, the founder of WikiLeaks, whose steady dumps of leaked emails from Hillary Clinton’s presidential campaign have given supporters of Donald Trump the only cheering news of the last few weeks.

“In some ways, toddandclare.com’s campaign against Assange is as revelatory as the leaked emails themselves, illustrating the powerful, sometimes unseen, forces that oppose WikiLeaks.

“Whoever is behind the dating site has marshaled significant resources to target Assange, enough to gain entry into a United Nations body, operate in countries in Europe, North America and the Caribbean, conduct surveillance on Assange’s lawyer in London, obtain the fax number of Canada’s prime minister and seek to prod a police inquiry in the Bahamas.

“And they’ve done it at a time when WikiLeaks has become a routine target of Democratic politicians who portray Assange as a stooge of Russian President Vladimir Putin and his reported efforts to disrupt the U.S. election.

“One part of toddandclare’s two-pronged campaign put a megaphone to unproven charges that Assange made contact with a young Canadian girl in the Bahamas through the internet with the intention of molesting her. The second part sought to entangle him in a plan to receive $1 million from the Russian government.

“WikiLeaks claims the dating site is ‘a highly suspicious and likely fabricated’ company. In turn, the company lashed out at Assange on Thursday and ‘his despicable activities against American national security,’ and warned journalists to ‘check with your libel lawyers first before printing anything that could impact or endanger innocent people’s lives.’

“So why are the parties to the melee coming out with both barrels blazing? That remains a mystery of the kind that might take a WikiLeaks-style document dump to suss out.

“What is beyond dispute, though, is that the attacks on WikiLeaks rose as the group released a first batch of leaked Democratic National Committee emails in July, days before the party’s national convention, and again this month, as WikiLeaks began releasing thousands of emails from the account of John Podesta, Clinton’s campaign chairman.

“The online company paints itself as all-American. Online material says its founders, Todd and Clare Hammond, ‘are an average American couple from Michigan, who met in the eighth grade.’ In 2011, the company says, the Christian couple started an email dating service, and ‘have married 3,000 couples to date.’ Their online network began in 2015, and a statement it filed to a U.N. body says it has ‘100,000+ female singles’ in six countries.

“The company’s operating address is a warehouse loading dock in Houston. Its mail goes to a Houston drop box. Its phone numbers no longer work. WikiLeaks says Texas officials tell it the entity is not registered there either under toddandclare.com or a parent company, T&C Network Solutions.

“The person who responds to email sent to the company declined to identify himself or herself or answer further questions.

“’We are not required to confirm the information you are requesting to anyone other than our government and tax authorities. So many people (and companies) have now been unfairly libeled by the wikileaks troll machine, we are being advised not to comment,’ an unsigned email from the company to a McClatchy reporter said Thursday morning.

“The people behind toddandclare.com persuaded a U.N. body known as the Global Compact to give it status as a participant in May, and it submitted an eight-page report to the U.N. group Oct. 4 carefully laying out its allegations against Assange. The firm was delisted by the U.N. body eight days later amid controversy over its claims.

“’This is not a report that’s been drafted by a dating agency. It’s highly legalistic and very structured. It’s the language of someone who has drafted complex legal submissions,’ she said.

“Under Todd Hammond’s name, the report alleged that Assange’s Swedish lawyer had reached out in June to offer Assange’s services on a campaign against rape in exchange for an undisclosed amount of bitcoin. It said the two sides held two video conferences.

“It said Assange, who has been in refuge in Ecuador’s embassy in London since 2012, made a connection to the child’s 22-year-old sister, who was a client of the online dating site, gaining access to the young girl.

“An assistant commissioner for the Royal Bahamas Police Force, Stephen Dean, said ‘there is no investigation’ into any such incident and that the police have received no evidence that such an incident occurred.” 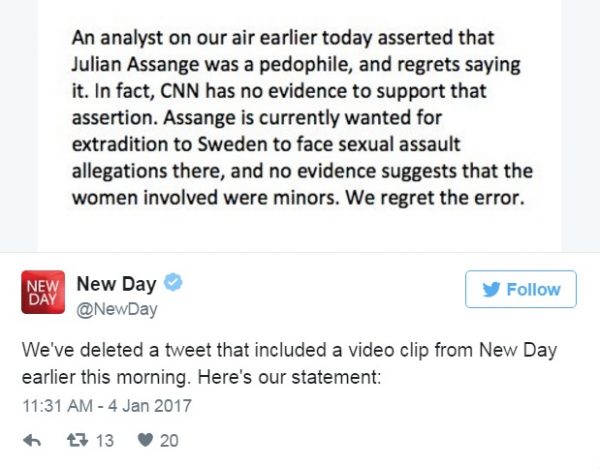 Well, if WikiLeaks wasn’t the most hated outlet by the mainstream media in general, and CNN in particular, it has just cemented this status should it indeed proceed with the lawsuit.

It will be interesting to see what internal CNN emails the discovery process reveals, should the lawsuit actually get to that stage.