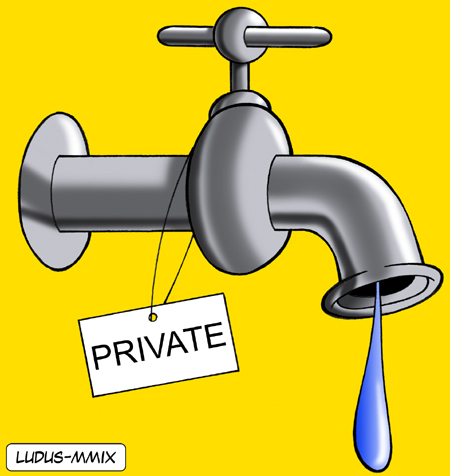 Humans can survive weeks without food, but only days without water — in some conditions, only hours. It may sound clichéd, but it’s no hyperbole: Water is life. So what happens when private companies control the spigot? Evidence from water privatization projects around the world paints a pretty clear picture — public health is at stake.

In the run-up to its annual spring meeting this month, the World Bank Group, which offers loans, advice and other resources to developing countries, held four days of dialogues in Washington, D.C. Civil society groups from around the world and World Bank Group staff convened to discuss many topics. Water was high on the list.It’s hard to think of a more important topic. We face a global water crisis, made worse by the warming temperatures of climate change. A quarter of the world’s people don’t have sufficient access to clean drinking water, and more people die every year from waterborne illnesses — such as cholera and typhoid fever — than from all forms of violence, including war, combined. Every hour, the United Nations estimates, 240 babies die from unsafe water.

The World Bank Group pushes privatization as a key solution to the water crisis. It is the largest funder of water management in the developing world, with loans and financing channeled through the group’s International Finance Corporation (IFC). Since the 1980s, the IFC has been promoting these water projects as part of a broader set of privatization policies, with loans and financing tied to enacting austerity measures designed to shrink the state, from the telecom industry to water utilities.

But international advocacy and civil society groups point to the pockmarked record of private-sector water projects and are calling on the World Bank Group to end support for private water.

In the decades since the IFC’s initial push, we have seen the results of water privatization: It doesn’t work. Water is not like telecommunications or transportation. You could tolerate crappy phone service, but have faulty pipes connecting to your municipal water and you’re in real trouble. Water is exceptional.

“Water is a public good,” Shayda Naficy, the director of the International Water Campaign at Corporate Accountability International (CAI), told me, “for which inequality has to fall within a certain range — or it means life and death.” When the private sector engages in water provision, greater disparities in access and cost follow.

Water is also different because it requires such huge, and ongoing, infrastructure investments. An estimated 75 percent of the costs of running a water utility are for infrastructure alone.

The track record of publicly funded private water projects shows that the private sector doesn’t find it profitable to invest in the infrastructure really needed to ensure that communities have access to clean and affordable water. “Water companies have found that their niche is seeking efficiency solutions through hiking prices and cutting spending on infrastructure investment,” Naficy told me.

Even as the World Bank Group continues to promote water privatization, its own data reveal that a high percentage of its private water projects are in distress. Its project database for private participation in infrastructure documents a 34 percent failure rate for all private water and sewerage contracts entered into between 2000 and 2010, compared with a failure rate of just 6 percent for energy, 3 percent for telecommunications and 7 percent for transportation, during the same period.

A look at projects deemed successes (PDF) by the World Bank Group shows they are not experienced that way on the ground. An IFC-funded private water project in central India’s largest city, Nagpur, for example, is the country’s first “full city” public-private partnership and has raised serious concerns among local residents. Worries range from high prices to project delays to unequal water distribution and service shutdowns. Allegations of corruption and illegal activity have led residents to protest, and city officials have called for investigations of contract violations. “In the last three years, the cost of operation and maintenance of the system has increased drastically and the price of water has increased manyfold,” Jammu Anand of the Nagpur Municipal Corporation Employees Union said in a statement released by CAI. (CAI details other examples like this one from Nagpur in its 2012 report “Shutting the Spigot on Private Water: The Case for the World Bank to Divest.” Full disclosure: I am a strategic adviser to CAI.)

What advocates, including Naficy and Anand, are reminding the IFC today is that significant and steady infrastructure investment is the only way to foster safe, affordable and dependable water supplies. And that is done more effectively by the public sector than by private corporations. Water systems need treatment facilities and a mechanism to channel water from its source in a stable way, usually through pumps, piping to households and individual connections from main pipes to households. According to Naficy, “There is no end run around building a strong public sector and building strong public oversight.”

In addition, financing by the IFC, which is both investor and adviser on these projects, poses a conflict of interest. On the one hand, the IFC is advising governments to privatize the sector; on the other, it’s investing in the corporations getting those contracts. “It’s self-dealing: setting up a project that it’s in a position to profit from,” Naficy told me. When the IFC was established in 1956, it was expressly prohibited from purchasing corporate equity to avoid this sort of conflict, but the board amended this rule a few years later, allowing these kinds of deals. The IFC insists there are interior barriers to such conflicts of interest, even as its own annual report touts “client solutions that integrate investment and advice.”

Opening up the spigot

Independent water advocates, from CAI to Anand’s group in India and others including the Focus on the Global South network, point to India today as evidence that privatized systems lead to underfunded infrastructure and unpredictable, often high prices. The IFC defends the private sector by claiming that these companies offerefficiency gains (PDF). But those gains come at the expense of lower-income households, advocates such as Naficy point out, as companies increase rates to subsidize their own profitability.

There’s a growing backlash against these projects. In 2000, headlines around the globe documented protests in Bolivia’s third-largest city in response to the privatization of the city’s municipal water supply and against the multinational water giant Bechtel, eventually pushing the company out of the country. The IFC’s own complaint mechanism reports that 40 percent of all global cases from last year were about water, even though water projects are only a small fraction of what the IFC funds. In 2013, CAI and 70 advocates from around the globe released anopen letter (PDF) to the World Bank Group calling for “an end of all support for private water, beginning with IFC divestment from all equity positions in water corporations.”

“Corporations don’t have a social or development mission,” Naficy told me. “Right now we’re funding development to prop up private projects, instead of putting the decisions for funding in the hands of governments that are accountable to people.”

Clean and affordable water is the basis of life. Skyrocketing water prices, unsafe supply, failing infrastructure — these problems fall disproportionately on the most vulnerable among us. This is why public institutions, not private corporations, must lead the development of water systems and delivery. The World Bank Group is uniquely positioned to increase access to clean water for the billions who need it. Instead of using its position to line the pockets of water companies, it should support what is most needed: affordable and clean — and public — water for all.