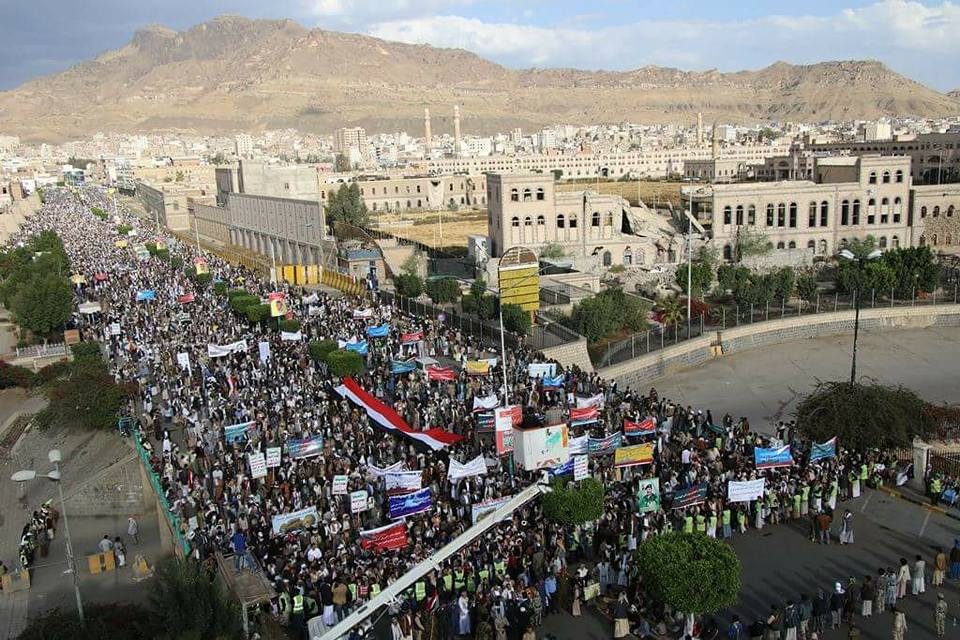 Rights groups warn the US and UK that their continued support for the Saudi-led violence in Yemen will lead to a famine in mere months. Meanwhile, Yemenis on the ground take to the streets to protest 2 full years of Saudi aggression.

The Obama administration was no friend to Yemen. In fact the US has silently supported the Saudi’s war since its beginning. But just prior to leaving office, Barrack Obama did manage to slow-down weapons exports to Saudi Arabia.

Donald Trump announced last week that he overturned Obama’s decision and would immediately send more weapons to the Saudis; who seem to bomb civilian areas indiscriminately despite cooperating with the US for intelligence. This is on top of a US-led bombing campaign which supposedly targets al-Qaeda locations; but even that seemingly altruistic intention is questionable.

Famine Looms as Already Minimal Aid is at Risk

At the same time, the Trump administration plans to decrease funding to certain aid agencies like USAID. It’s hard to say how much aid is actually reaching the Yemeni people. But USAID reports that $56 million in humanitarian aid went to Yemen last year. Which agencies expect to decrease by nearly 30% over the next fiscal year.

“In Yemen, more than 17 million people — an astounding 60 percent of the country’s population — are food insecure, including 7 million that are unable to survive without food assistance,” said Gregory Gottlieb, an acting assistant administrator for the U.S. Agency for International Development (USAID). “This makes Yemen the largest food security emergency in the world.”

Aid agencies like USAID now warn that famine in Yemen is only months away. Humanitarian aid will certainly help many starving people. But the ultimate problem cannot be ignored: the Saudi-led aggression on Yemen. Bombs aside, Saudi Arabia has an air blockade on Yemen which limits the flow of people and goods.

Despite Saudi aggression– and seemingly the world against them– the Yemeni people remain resilient. Yemenis took to the street this week en masse to mark 2 years of continued aggression from the Saudi regime.

Global day of action for #Yemen

join a protest or share a photo of yourself in a busy place w/ an #EndYemenSiege #StopBombingYemen sign pic.twitter.com/YhvLR7g1dg