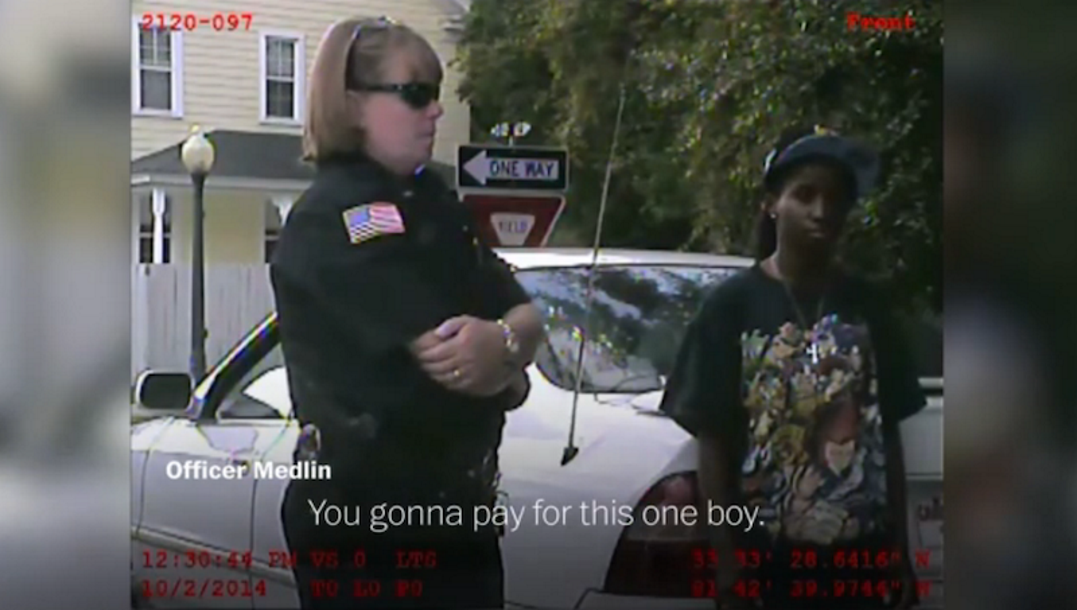 Today the systematic police oppression of minorities continues, as South Carolina appears to have set the bar at a new low.  A black couple was pulled over for driving a new car with new vehicle plates. There is nothing illegal about this, but the officer’s dash cam clearly shows that this is the reason for pulling them over. Let’s suppose that he was just checking to see if the car was really a new purchase.

After handing the driver her license and sales receipt back, the dash cam shows the officer telling a male passenger to get out of the car. He cuffs him, searches him, and tells him that he is bringing in a drug dog to walk around the car. Then, he tells the man he is “going to pay for this one, boy.”  While  they are conveniently off camera.

The dog is brought in and apparently smells drugs so the cop rips the car apart but finds nothing. The dog cannot find anything either. The officer is convinced that the man must have drugs. Why? Because, according to the officer, he remembers dealing with him while he was working in a drug unit, years ago.

Off camera, the officer decides to do a more aggressive search and runs his hands up into the passenger’s rectum hard enough that he can feel what the passenger says is a hemorrhoid. The officer says that it can’t be a hemorrhoid because it’s too hard and he’s had hemorrhoids and knows that’s not what they feel like. The man insists and objects to the search.

The officer can be heard radioing in the event and says that he has to let the couple go because even though he pulled his pants and underwear down and took pictures of the man’s rectum he could not get a visual and the man must have the rock cocaine inside of him.

“He said it was a hemorrhoid. It ain’t no… it was a rock. It was a rock of crack. It’s gotta be a rock. He’s got it up in his butt…I got nothing else to go on. Nothing. Yeah, we’re gonna have to cut him loose here.”

The man asked the officer why he did all of this. The officer said it was because he “knew” him.

The man asked the officer if he had seen how many years it’s been since he’d been in trouble, stating that he has kids now, and the woman driving the car is his wife.

The officer told him that drug dealers and users have kids, too. Then he told him to get the car detailed so other dogs don’t “hit” on it. He then thanks them and leaves.

WATCH Above- Police ‘sexually assault’ black couple during roadside cavity search . Two South Carolina residents are suing the City of Aiken and its department of public safety over what they say was an illegal cavity search in broad daylight.

The Aiken Standard reports Elijah Pontoon and Lakey Hicks filed the lawsuit last September. It was moved to federal court in November.

Although it is true that Hicks has a criminal record that includes past drug charges, he’s had a clean record since 2006. He told Medlin that he has kids now, indicating that his past actions don’t reflect on his present condition. Medlin claimed he remembered Hicks and had dealt with him on previous occasions, which gave him reasonable suspicion to perform the search.

The lawsuit, filed by both Hicks and Pontoon, names Medlin, along with several other officers and the Director of the ADPS officers, as defendants. Court documents show that the defendants are accused of improper search and seizure and improper actions.

The South Carolina police officers are being sued under the Federal law and Federal Causes of action, and Hicks and Pontoon are seeking punitive damages. The Director of ADPS and the City of Aiken are being sued under the State law causes of action, although no punitive damages are being sought against them. According to the lawsuit, Pontoon and Hicks say they were illegally stopped by officers for a paper car tag and searched without consent. In addition to the cavity search, the complaint says a female officer exposed Hicks’ breasts on the side of the road, with a search performed in the presence of three male officers.
South Carolina Police Search: Cops Perform Illegal Cavity Search During A Routine Stop SC New York taxi drivers to be banned from flirting with or ejaculating on passengers cabs stopped speeding Capt. David Turno said in a statement that the city denies the allegations. Turno wasn’t available Saturday for further comment.