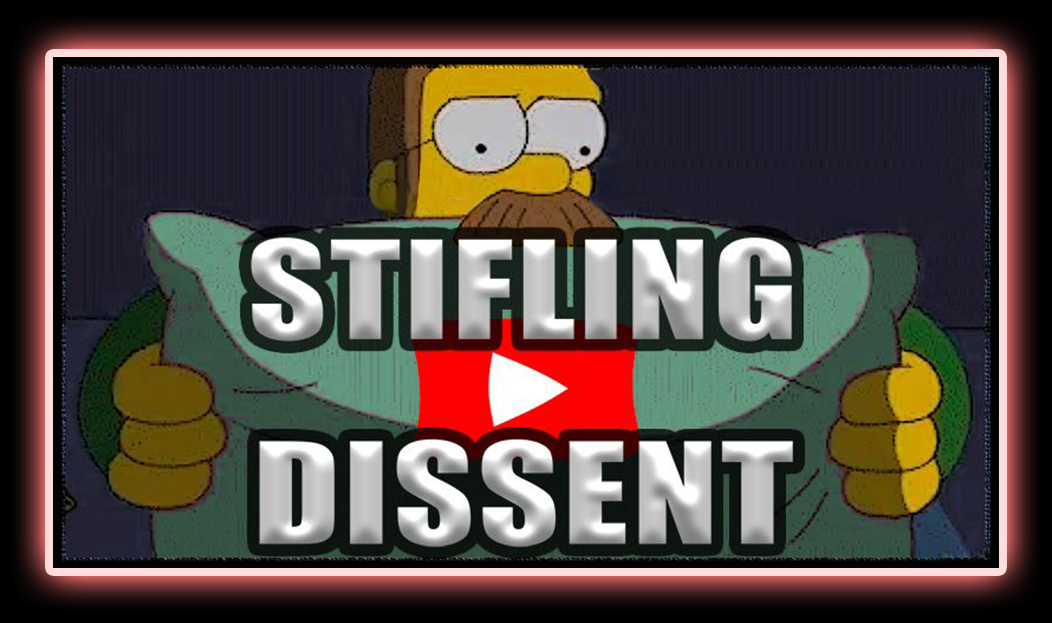 Let’s be honest with ourselves. As an independent news organization, it’s been tough covering the latest developments that have been happening in Las Vegas. There’s been a lot of mass confusion, a lot of speculation, a lot of people making up facts and a lot of people playing the blame game.

News organizations are citing unnamed sources, that supposedly fit the shooter in with their own political confirmation biases. We have been personally calling this out. Trying to give you the facts of the case with the latest developments. We will try again in this video to do it with integrity.

It’s going to become a lot more challenging to do. We’re getting alarming details from YouTube, who has just announced they will be tweaking their search results, as Las Vegas conspiracy theories rise to the top. 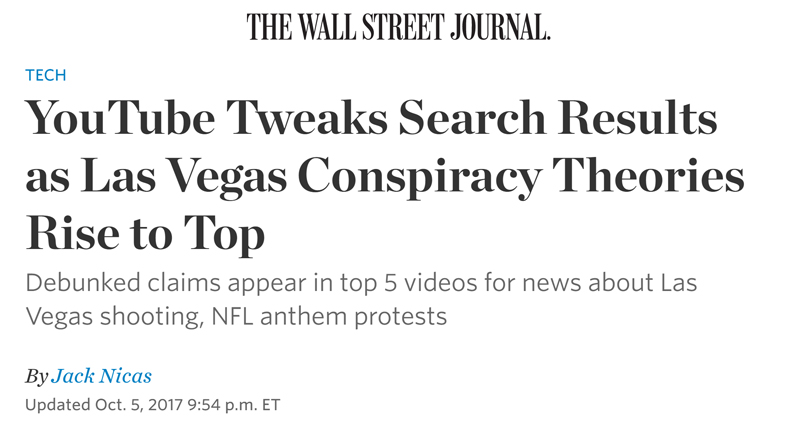 There are a lot of bat poop crazy conspiracy theories that muddy the water with disinformation and propaganda. They make it look like anyone who’s asking any critical questions of a major event is just a loony, crazy tinfoil hat wearing insane person. Those people do exist. The reason why this new YouTube policy announcement is frightening is not that it will stop those crazy people but because it will stop anyone asking any critical questions of any significant event in the future.

YouTube announced that it is accelerating the rollout of planned changes to its search engine. On Wednesday night the company began promoting more “authoritative sources” in search results especially for those about major news events. Who does the YouTube Google Alphabet monopoly view as an authoritative source of news? They won’t tell you, but most likely it’s the establishment voices of mainstream media corporations like CNN, MSNBC, and CNBC. The mainstream media establishment has utterly lost their reputation with the American public. People are no longer watching TV news since they’re going online to get their information from unbiased, independent sources. Now those sources will be silenced, and they will be muted. They won’t be in the suggested videos, in the search engine results, and the won’t be in the recommended video lists.

These “authoritative” voices which previously lied about wars, lied about banker bailouts and so many other things those will be the institutions that now will control the narrative. While they continue silence, anyone, who is not a part of the establishment mainstream media particularly those that do not tow the status quo. This includes channels like WeAreChange and many other legitimate independent news channels on YouTube.

You the viewer are more critical than ever when it comes to sharing real legitimate criticisms of authority. YouTube will only allow the general public to see the authoritative voices which of course are all from mainstream media outlets. The mainstream media only regurgitates everything that the government and other authority figures tell them. Those who have been caught multiple times lying to the general public to hide either their incompetency or just criminal behavior.

The Washington Post has been mocking survivors off the Las Vegas Massacre. An example is there making fun of Instagram star Dan Brazilian who almost died that night. He saw a girl next to him get shot in the face. He lived through horror. The Washington Post has the audacity to make fun of him calling him a hypocrite and a coward. All because he fled the scene during a mass murder shooting. 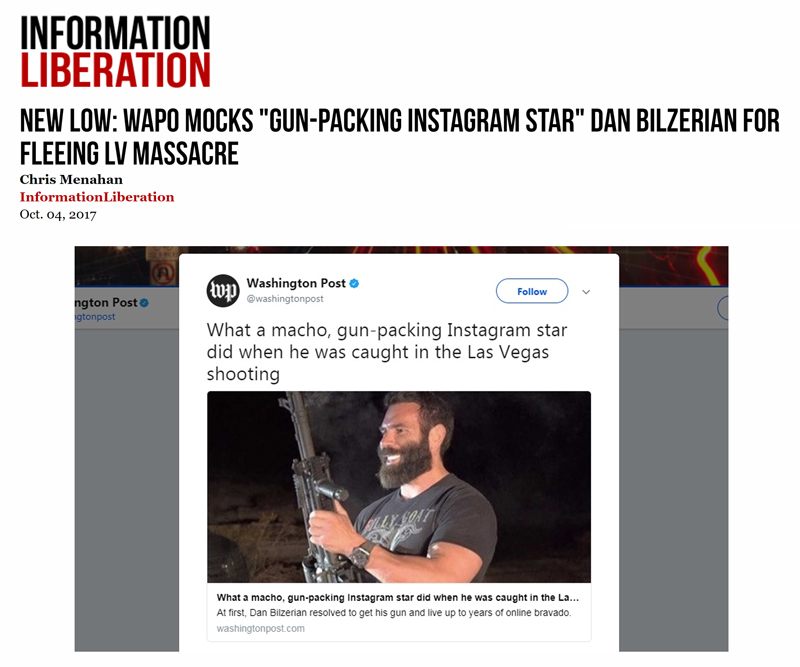 What else are you supposed to do during a mass shooting? Making fun of a survivor of this horrendous event just really shows an all-time low for a discredited piece of rag that some people call a newspaper.

“Making fun of a survivor of this horrendous event just really shows an all-time low for a discredited piece of rag that some people call a newspaper.”

In reality, they are just a propaganda paper that has their own YouTube channel. A channel that YouTube will most likely see as an authoritative voice that will be pushed and recommended to everyone.

Let’s go over some of the details that have just emerged about this latest Las Vegas massacre. We are learning that the Las Vegas shooter transferred over $100,000 overseas in days before this attack. His brother came out and said that there “wealthy people” and that $100,000 isn’t that much money for them.

We’re also learning that this Las Vegas shooter had fifty pounds of explosive materials in his car in addition to a couple of thousand rounds of ammo. This was sitting in the parking lot of the MGM Grand. He also had cameras set up inside and outside of his hotel room so he could monitor the entire situation as it went down.

We’re also discovering that he worked as a government employee for over a decade inside of the Department of Defense, IRS, and even the US Post Office. 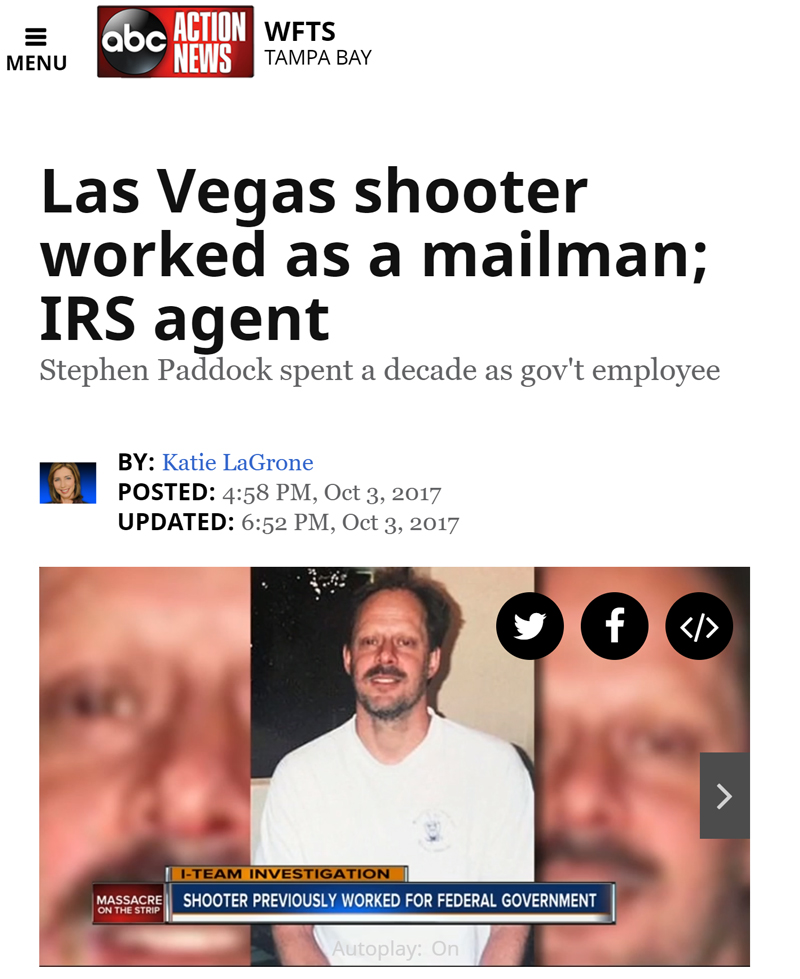 The Las Vegas Review-Journal reported that he was prescribed a psychotropic drug that can have serious side effects. It was prescribed several weeks before this incident. The medication is used as a sedative and a calming medication. However, the side effects can be confusion, hallucinations, unusual thoughts, or behavior; including unusual risk-taking behavior, decreased inhibition, no fear of danger, depressed mood, thoughts of suicide, or hurting oneself. They also include hyperactivity, agitation, aggression, and hostility. The authorities say they have evidence that the Las Vegas shooter planned to survive and possibly escape this mass shooting. Photos leaked from inside of his hotel room apparently show a letter that he left. Authorities have since admitted to the presence of the letter but said it was not a suicide note. They have remained tight-lipped on the contents of it.

The discrepancies don’t just end there as there has been a room-service receipt leaked online that is leading many people to believe that there was a second person involved. The receipt lists that the room service was for two people and shows that the shooter was in the room on September 27th. 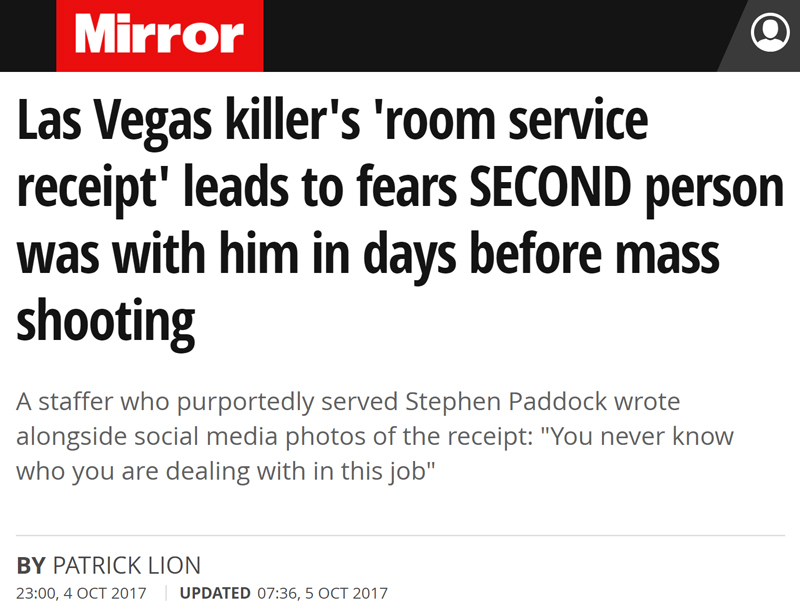 The hotel employee posted these receipts on his Facebook page before later deleting them. He wrote “I think. I talked to the Mandalay Bay assassin, and I was alone with him for several minutes.” The assailant’s name is on the receipt and directly contradicts the police reports of when this assassin checked into the hotel.

Supposedly the shooter had previously booked two rooms at the Blackstone Hotel in Chicago overlooking the Lollapalooza event and had rented multiple rooms looking over two separate festivals in Vegas and Chicago. One of the events being a rap concert which directly contradicts Infowars attempts to assert without any evidence that the shooter was an anti-Trump liberal with ties to Antifa and ISIS.

An Iraq war vet gave the exact location of the Vegas shooter and said that it took the police over an hour to respond. He said it felt like it took them too long to get over there to take him out. 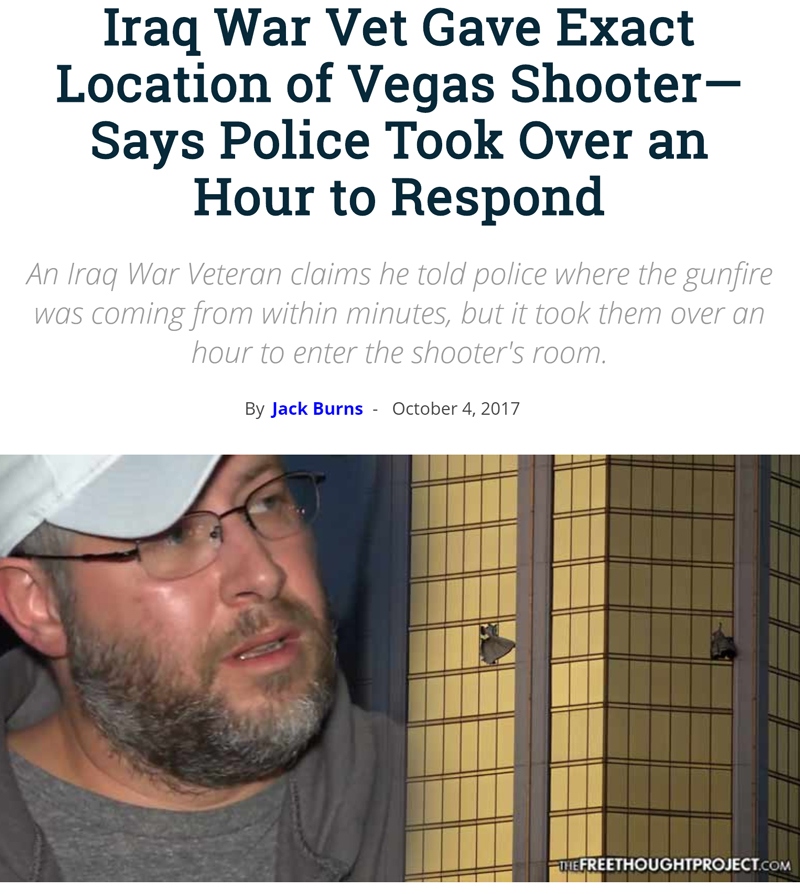 There’s a lot of theories and speculation out there about what happened. What was the motive why did this happen. Some of which have been thoroughly debunked. This still leaves a lot of important questions that are not being answered. The authorities are being very tight-lipped, they even say that the motive remains elusive to them.

Whatever the truth may be it’s still important to ask the critical questions and not just participate in wild theories since I refuse to do that.

There are forces behind the scenes that are looking to benefit from this tragedy. Not only by politicizing it but by pushing other political agendas. This significant event will create changes for our way of life. We’ve seen the New York Times wrote an op-ed today calling for the repeal of the Second Amendment. 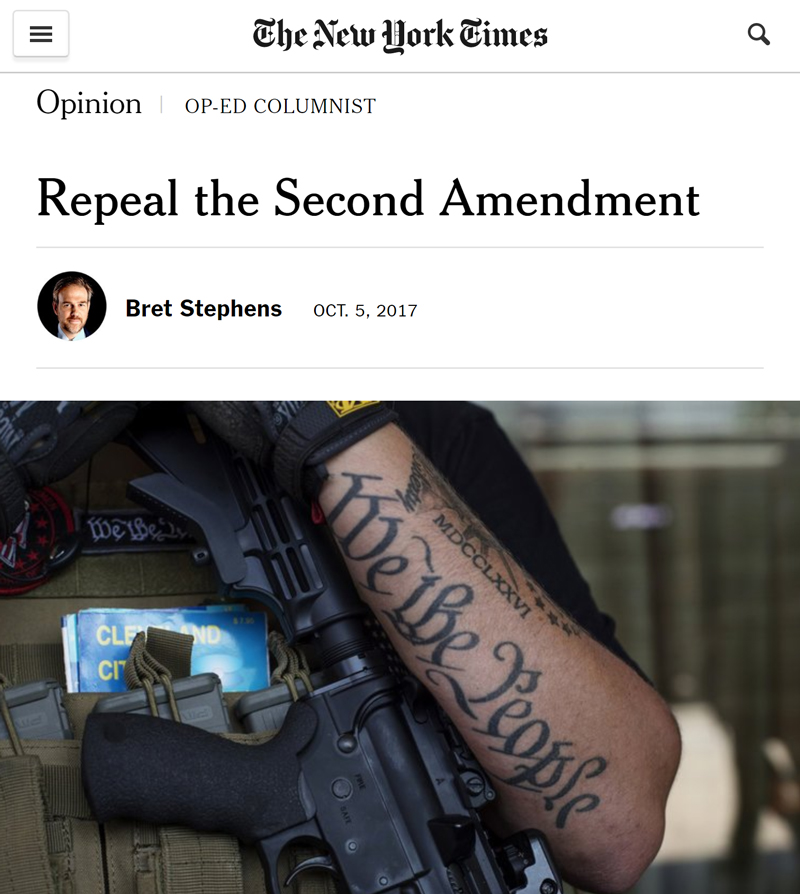 We’ve also seen a bizarre post on 4chan made three weeks ago by an anonymous poster who called themselves John. He wrote warning users to stay away from any gatherings or large groups of people in the Vegas area. He stated that he had insider knowledge of what he referred to as a “high incident project.” He even wrote that he couldn’t guarantee anything would happen but that Las Vegas is “on their minds.”

Then he went on to correctly name former head of the Department of Homeland Security Michael Chertoff and casino owner and billionaire Sheldon Alderson. He felt these two men are set to profit most from the wave of new regulations set to spring up in response to this Vegas incident. This is just a random 4chan post so take that with a grain of salt. The fact does remain that people like Chertoff and those behind similar companies do stand to profit. Already metal detectors and body scanners have been placed in some Las Vegas hotels in response to this incident. Former chief of staff of the Department of Homeland Security a former CIA agent now CEO of the Chertoff Group went on CNBC. He said, “In a free society there’s no way to eliminate this kind of risk.” So he said in a free society you will not be safe, freedom is bad, and then recommended: “in addition to Intelligence Sharing you can also do a number of steps to establish a secure perimeter using various types of screening technology.”

Screening technologies which refer to body scanners and metal detectors. Which the Chertoff group that he is CEO of manages. This security consulting agency includes a client that manufactures the machines. His company directly represents the companies that make the scanners. That’s why even Gawker put it in 2009 that “Why is Michael Chertoff is so excited about full-body scanners?” 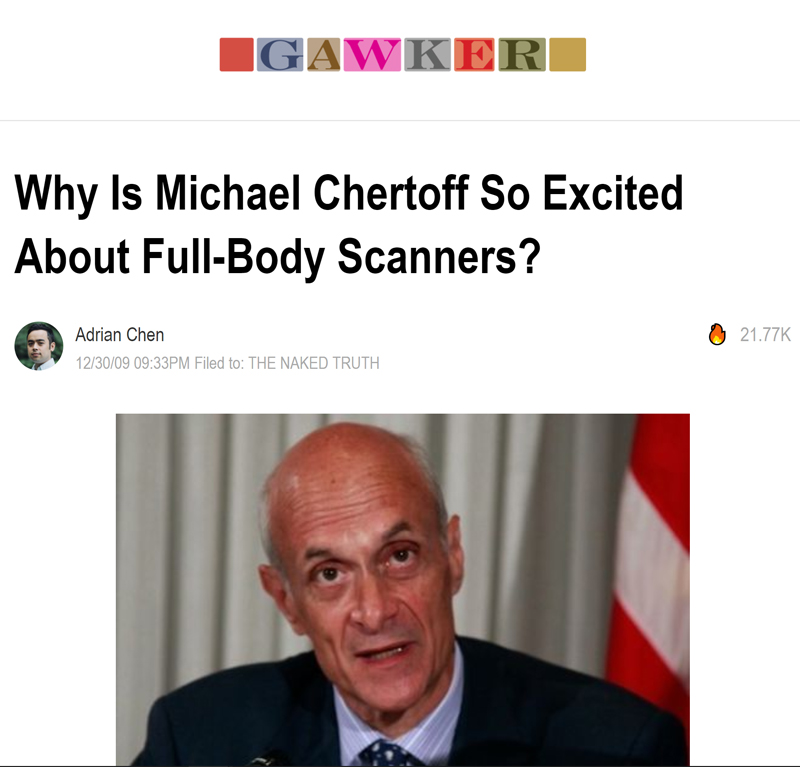 A company that people described in effect is a shadow Homeland Security Agency. This group has recruited at least 11 top officials from the Department of Homeland Security as well as former CIA director Michael Hayden.

I think it’s important for the American people to understand that the same authoritative voices that are having representatives and CEOs of major companies pushing for body scanners are also the ones who are going to be selling them.

Let’s not jump to conclusions, let’s not speculate, and let’s stay with the facts. We’re going to be following this event very carefully on this independent news channel. We are not supported or backed by any authority figures but just you the viewer. Please consider donating at wearechange.org.

Your donations through PayPal, regular mail or Bitcoin help keep us entirely free and fully independent. That way we are fully open to give you this sort of news. If you appreciate it, please share it with your friends and family members. Let me know what you think in the comment section below and of course, stay tuned for more.