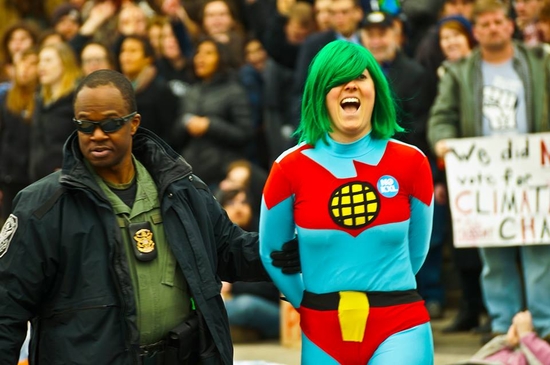 Final Update: There were 398 arrests today at the anti-KXL rally. Bill McKibben notes that the number is, coincidentally, the “exact current concentration of CO2 in the air.” This won’t be covered much in the corporate parasite media, but it was a huge and momentous event in the long history of activism. Youth almost always drives social change, and this was an entirely youth organized event. I know that the people zip tied to the fence today got very, very cold once the rain began. It is late evening and they are still being processed at the police station. It will be interesting to see how the media handles the whole protest.

Update: The arrests of the people ziptied to the fence proceed slowly. The live-streams are now down. The police were very methodical and non-dramatic in general. This is one of the largest number of students arrested in any direct action in ages. The weather is worsening, a cold rain is falling, snow to begin soon.Update: Arrests have begun. The protesters are doing the “human chain.” The will be zip tied, taken into the tent to be processed, taken away on the vans, put in jail. There is an enormous amount of protesters across the street, said to be causing massive traffic jams. The protesters are shouting “We Love You!” I love those young people. While our elites and intellectuals are writing about the “death of the Left” they are out getting processed in the Democracy Tent. Their records will follow them. They are young. We, the elders, need to step up by stepping into the streets.

Update: The chant right now: “We Are Fighting Global Warming, This Is Now Our Second Warning!”… The police are milling. Gloves are on. Double “O” zip ties (the super strong black kind) are in evidence. The third warning was just given. It is about not moving on the sidewalk, I think. When they are told they will be arrested, the students all begin to cheer. You are about to see Democracy Delivered with the loving grasp of tightened zip ties….

Update: Democracy will be delivered at any moment now. The cops have set up a “Mass Arrest Tent” and SWAT is also there. The oil slick is cordoned off, kind of like a weird pit theater. It is very dramatic. The cops are putting on their gloves. CNN is drooling.

Update: The Arrest Wagons are rolling in. It is getting very intense. The police have cordoned off the main action in a kind of stage setting that includes the oil slick. No one can get in or out. They are kicking everyone out of the square, everyone in the square will be arrested, including our Live-streamer.

Update: Hundreds of people have ziptied themselves to the White House fence! the park is flooding with people, and multiple police forces are in play. The protesters are unrolling a huge oil spill. Mainstream media is everywhere, for once. Wow. Check out the live stream!

Update: They’ve unrolled a massive “oil slick” and people in white suits are staging a die-in in the oil pools. The mainstream media are falling all over themselves. Dozens of people are in the oil slick and behind them hundreds are zip tied to the fence in front of the White House.

There is a huge march right now led by a student-organized national group XLDissent. Over two thousand students and activists from around the country caravanned to DC for today’s action. There were massive civil disobedience classes conducted last night, and recently in communities, and it is said that “civil disobedience is planned today.” I think that will be in theatrical form at the White House. Park Police, DC Police and Secret Service are shadowing the march. The plan is to get to the White House and participate in good old fashioned non-violent civil disobedience. The march route is five miles long, and they are going strong.

They are arriving at the White House, and the arrest wagons are already there. A lot of them! There are double sets of barricades and hundreds of officers, horse police, even Jail Busses. There will be a rally in Lafayette Square, where people will talk, and then cross over to the White House. 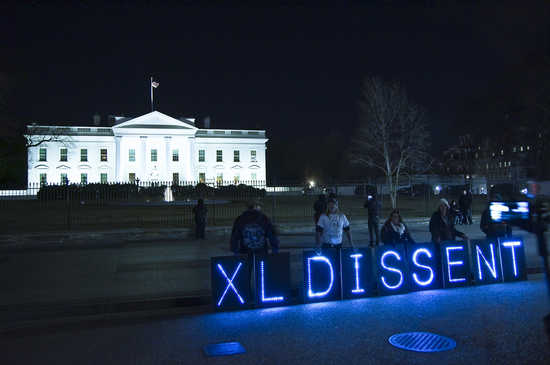 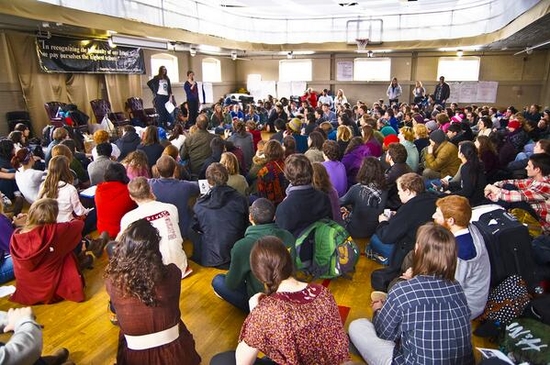 Marching through Georgetown to the White House: 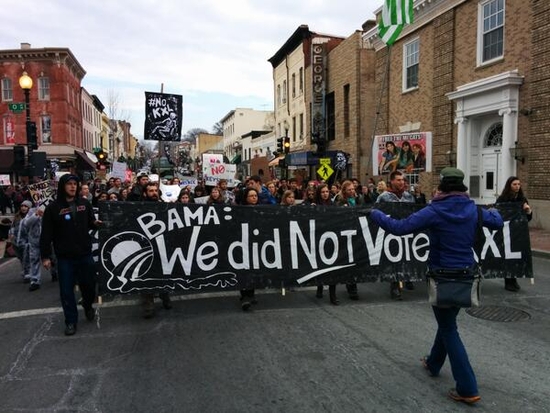 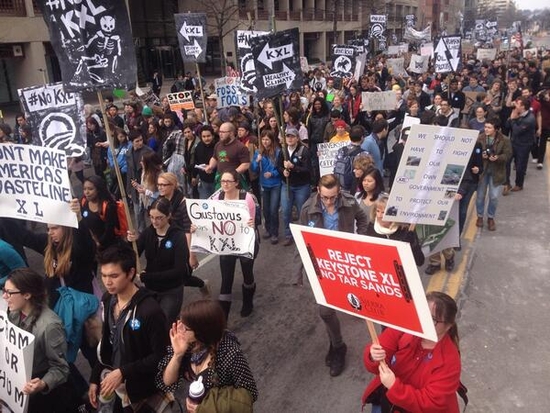 The arrest busses await to carry away protesters: 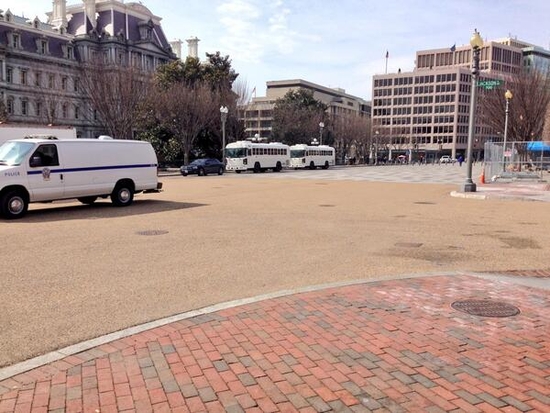 The speakers are addressing the crowd:

15 motorcycles, 10 horses, arrest busses, bomb squad, the mainstream media, SWAT teams are all present… “The only way this could be any hackier is if they brought Wolf Blitzer,” says the live-streamer, JamesFromTheInternet… Here comes the protestors! 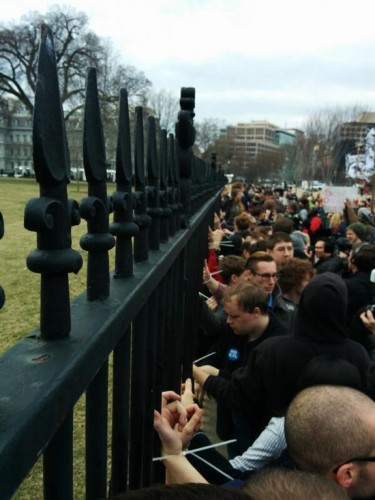 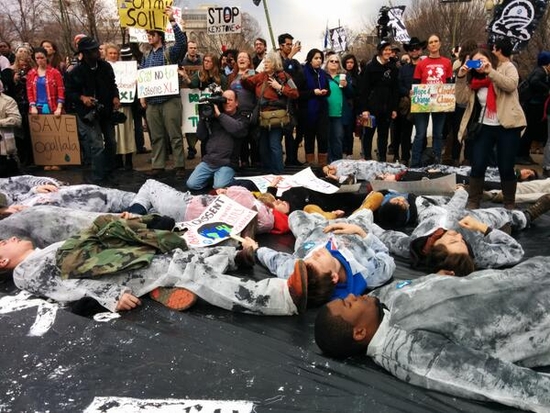 The organizers expected 300 or 400 for the event, and there are thousands. This is an amazing show of solidarity with the climate and environmental justice movement.
Arrests are being made… even of Captain Planet! 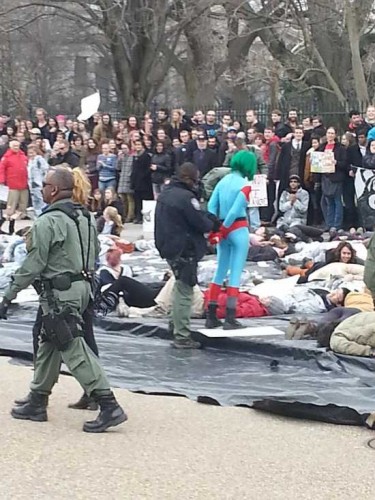 “Right after I took this picture, I was escorted off the premises,” says our friend from Chicago, the Bullhorn Girl. People being carted off slowly… 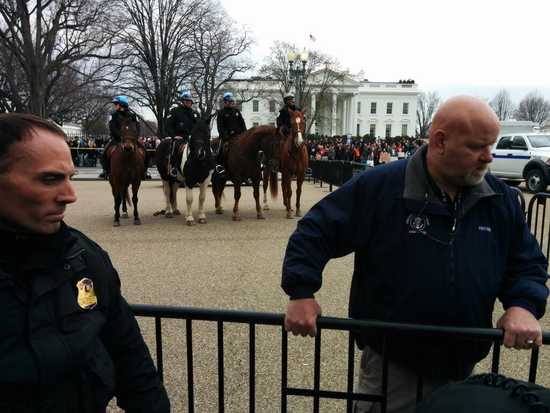