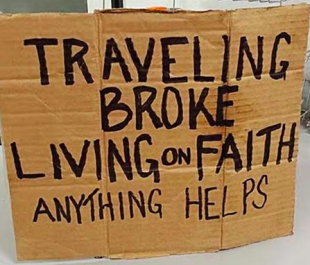 Months after their conduct was discovered, two police officers were disciplined for making a game of stealing signs from homeless people in Midland, Texas — and many believe the cops’ punishment was not harsh enough to fit the offense.

In the town with an estimated 300 homeless people, investigators reported 8 signs in Officer Derek Hester’s patrol vehicle, and Officer Daniel Zoelzer was discovered to have trashed an additional 10. Both officers claimed that they took the signs after issuing trespass warnings, but no such warnings were recorded in 2013. Text messages between the two show the officers expressing concerns about being found out, although one of the men’s texts read, “Oh I don’t care lol I’m not worried.” After an internal investigation, which was not originally publicized, Hester and Zoelzer were suspended for three unpaid days.Zoelzer and Hester were first probed when another, unidentified cop reported Hester for procuring brass knuckles and refusing to turn them in as evidence; the police department learned of the game when looking into the matter. The suspension occurred two months after the police department first heard about the officers’ misconduct, but despite backlash, Police Chief Price Robinson contends that the disciplinary measure was satisfactory.

Civil rights groups and advocacy organizations argue that the officers’ conduct violated the free speech rights of the homeless and constituted discriminatory harassment. Moreover, the city does not officially ban panhandling.

The criminalization and discriminatory treatment of homeless people is a growing problem nationwide. In another notable example, State Rep. Tom Brower (D) took to sledgehammering their possessions in Hawaii. Brower told the Honolulu Star-Advertiser that he was “disgusted” by homeless people, and explained that he smashed unidentified shopping carts. Several cities have also considered or implemented ordinances targeting their homeless populations: Los Angeles, for instance, may ban feeding the homeless in public.

A Florida county spent over $5 million jailing over 30 people for quality-of-life offenses, as opposed to major crimes, and Tampa passed a law last year to permit jailing people who sleep in public.