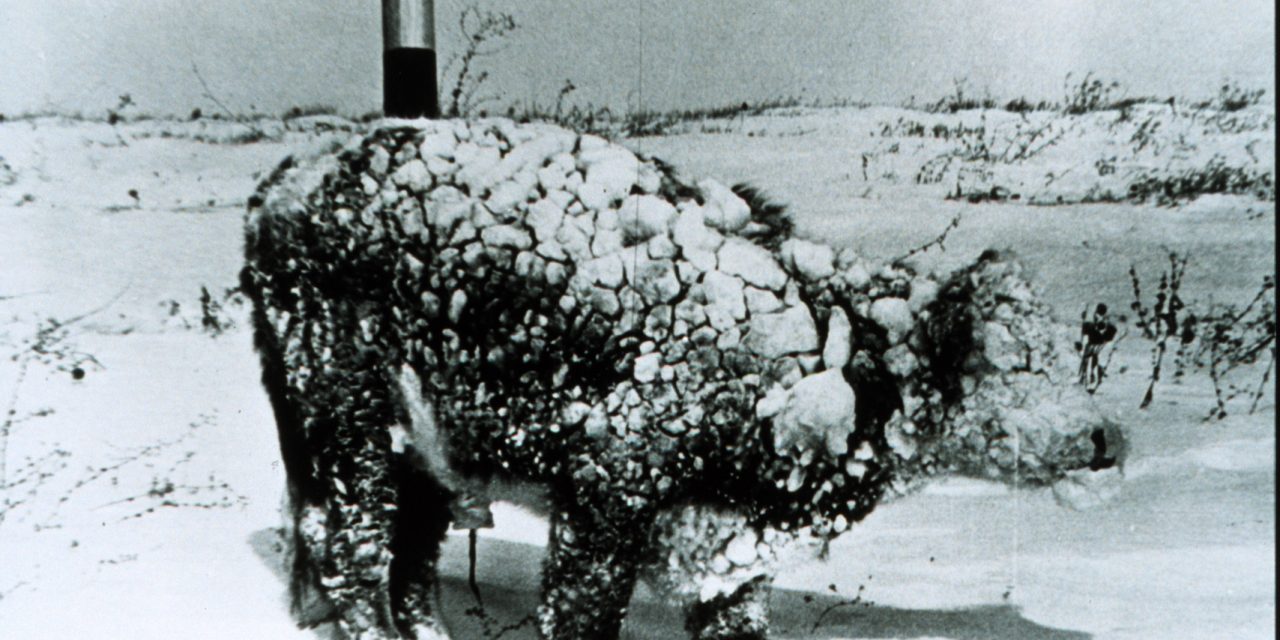 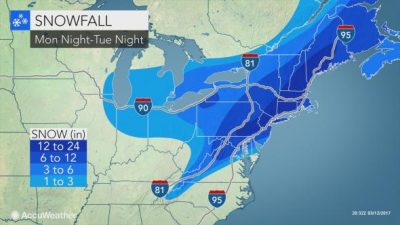 A major Nor’easter threatens to shut down travel due to heavy snow and strong winds from Washington, D.C., to New York City and Boston early this week, as weather forecasters on Sunday put the U.S. East Coast on a blizzard watch, warning some 50 million people of potential snowfall from 12 to 18 inches, coupled with wind blasts in some areas from Monday night into Wednesday. New York City issued a snow alert for Monday night, preparing its fleet of snow plows to deal with the fallout.

Washington, which often grinds to a halt with even low levels of snow, is expecting 5 inches in the city and twice that in outlying areas.

Some have gone so far as to dub the coming storm a “crippling blizzard”:

The National Weather Service warns that the storm has raised the potential for dangerous travel and power outages with damaging wind gusts up to 50 mph possible across eastern Long Island and southeastern Connecticut.

The likelihood of blowing snow and strong winds could lead to “whiteout” conditions with visibility as poor as a quarter mile, the service said. Sub-freezing temperatures were forecast in the upper 20s Fahrenheit, Reuters adds. 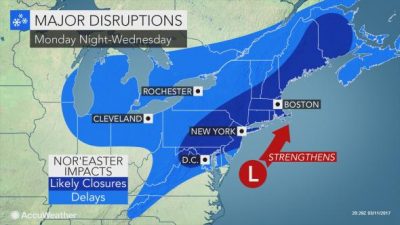 According to Accueweather, areas from northern Virginia to northern Maryland, central and eastern Pennsylvania, northern New Jersey, central and southeastern New York state and a large part of New England will be shoveling out of 6 inches or more of snow from the storm. A widespread zone of around a foot or more of snow is expected from the western suburbs of Philadelphia to New York City, Boston and Portland, Maine.

“New York City’s Central Park has not recorded more than 10 inches of snow from one storm in March since the 1993 Storm of the Century,” AccuWeather Senior Meteorologist Kristina Pydynowski said.

This amount of snow over such a broad, heavily populated area could bring travel to a standstill as snow clogs streets and highways and heavy snow and wind trigger airline delays and flight cancellations. Some flights have already been canceled in advance of the storm.

“I encourage all New Yorkers in affected regions to plan ahead, and avoid any unnecessary travel as the storm progresses,” Cuomo said in a statement, adding that commuters should expect road closures, delays and cancellations.

To be sure, some more cynical observers recall the last time New York was paralyzed ahead of what was expected to be a major storm, the impact ended up being relatively minor, that said it remains unclear if this time caution not warranted.

The Port Authority of New York and New Jersey was installing hundreds of pieces of snow equipment at the three New York area airports, including snow melters that can liquefy up to 500 tons of snow per hours and plows that can clear snow at 40 mph, Cuomo’s office said. Thousands of tons of salt and sand were prepared for airport roads, parking lots, bridges and tunnels. Some flights have already been canceled in advance of the storm.

Accuweather also warns that for thousands of miles of roads in the region, this will be an unusually cold storm for the middle of March. Much of the snow that falls will accumulate on the roads.

“Residents should prepare for school closures and potential cancellations of sporting events due to hazardous travel for players and fans,” Pydynowski said.” 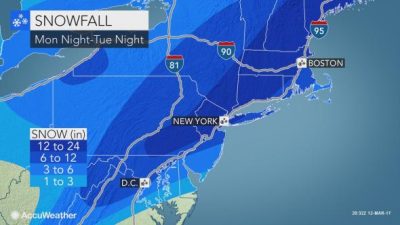 All rain or a mixture of rain and snow is likely to fall on southeastern Virginia, southeastern Maryland, southern Delaware, southern New Jersey and Cape Cod, Massachusetts. Should the storm track farther to the east, then heavy snow could fall in these areas. Should the storm track farther west, more rain could fall farther inland, especially to the Interstate-95 corridor. In this case, the zone for a foot or more of snow would shift westward to the I-81 and northern I-91 corridors.

“It is also possible that a band of burying snow with amounts to or past a foot rides up the central Appalachians before shifting to New England,” Pydynowski said. “In this situation, there could be a break in the heavy snow over a part of the mid-Atlantic’s I-95 corridor.

Making matters worse, as the storm intensifies, winds will ramp up along the coast and expand inland. Wind gusts can frequently top 40 mph at the height of the storm, which cannot only create blizzard conditions, but may break tree limbs and threaten sporadic power outages. Blowing and drifting snow can become a significant problem, not only during the middle of the storm on Tuesday, but perhaps for a couple of days in the storm’s wake. During much of the storm, northeasterly winds will pull ocean water toward the coast and create rough surf from Virginia to Maine.

This effect will cause tides to run 1-2 feet above normal and can result in coastal flooding at times of high tide. 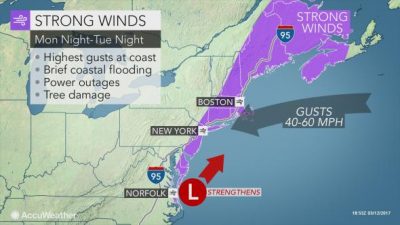 The threat of heavy snow comes toward the end of an unusually mild winter along much of the East Coast, with below-normal snowfalls in many areas, including New York City and Washington. The Northeast Regional Climate Center reported that this was the warmest February on record in nearly the entire area, with temperatures in New York last week hovering near 70 degrees Fahrenheit, according to Accuweather.com, and hit 60 degrees or higher on six days in February.

Meanwhile, in the western United States, the weather service forecast potentially record-setting heat in the four corners states of Arizona, Colorado, New Mexico and Utah, where temperatures were expected into the 90s Fahrenheit in some places.