Advertisers Seemingly Compete to See Who Can Disrespect 9/11 Hardest 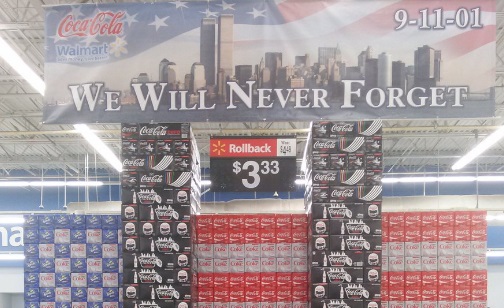 As the anniversary of the World Trade Center attacks approaches, there appears to be a competition for who can create the most offensive 9/11 themed marketing gimmicks. The top contender recreated the towers from boxes of Coke products and mattresses.

Shawn Richard was out shopping with his girlfriend at a Walmart in Panama City when they spotted the Twin Towers made up entirely of soda products. Disgusted, he snapped a photo and posted it to Twitter.

“We stopped and stared at it like, oh my god,” Richard told BuzzFeed News. “Nobody seemed to be noticing it, it wasn’t very crowded, and I got the feeling that it had just been assembled. So we took some pics and went on our way.”

The photo has been retweeted thousands of times, with users mocking the tacky stunt.

“This display was meant to honor local firefighters and to support their organization’s upcoming event. We sincerely apologize that anyone was offended or misunderstood its intent, and we have replaced the display,” the Coca-Cola Company said in a statement.

Coca Cola isn’t the only company that does not understand that 9/11 is not a holiday, and not a time for marketing gimmicks.

Miracle Mattress in San Antonio, Texas, is also in hot water after making a hyper and obnoxious commercial urging people to come to their “Twin Towers sale.” In the shocking ad, a woman announces that all mattresses are on sale for a “twin price” as she stands infront of two stacks of mattresses aiming to resemble the towers.

At the end of the clip, two men knock over the mattresses and the woman turns back to the camera and says, “we’ll never forget.”

The owner of the store, Mike Bonanno, has since issued an apology — and announced that the store is closing “indefinitely.”

“I say this unequivocally, with sincere regret: the video is tasteless and an affront to the men and women who lost their lives on 9/11,” he wrote. “I am disgusted such a video would have been conceived as a promotional tool. And even more incensed it was created and posted on any social media site that represents Miracle Mattress.” 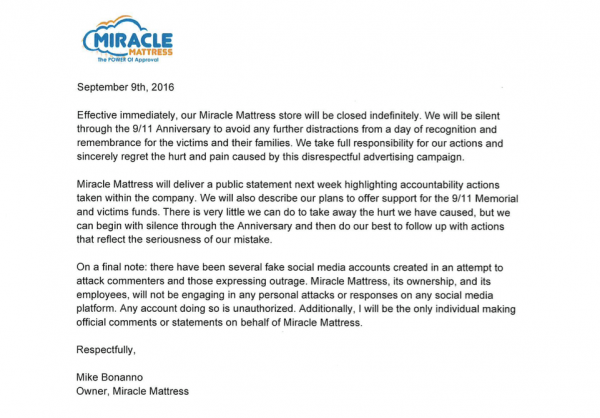