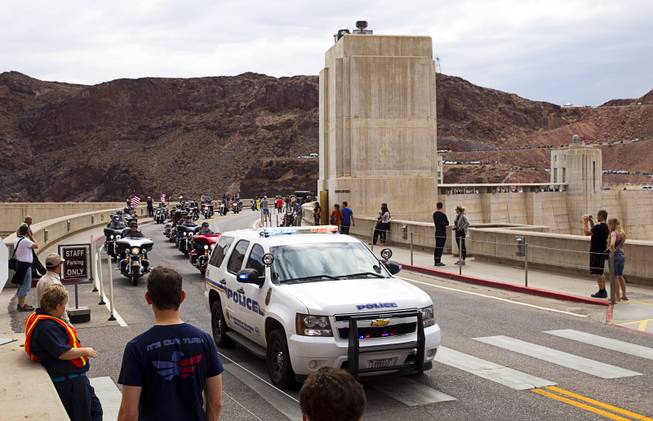 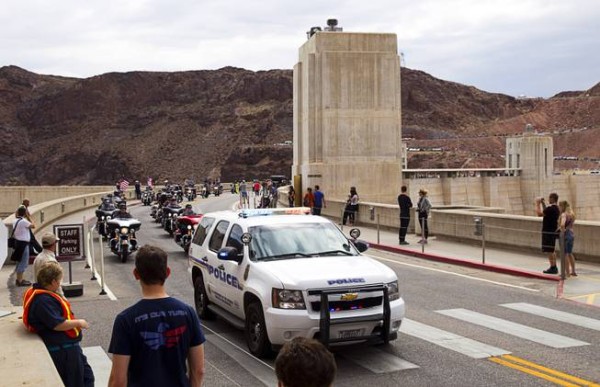 A Dam Police vehicle leads hundreds of motorcyclists over Hoover Dam during the annual Flags Over the Dam parade Sunday, May 24, 2015, from the dam to Southern Nevada Veterans Memorial Cemetery.

In a move that’s prompting questions about the stockpiling of weapons by the federal government’s nonmilitary agencies, the Bureau of Reclamation wants to buy 52,000 rounds of ammunition for use in law enforcement at Hoover Dam and Lake Mead.

After learning about the purchase request, Nevada Rep. Mark Amodei vowed to inquire with the bureau about its operations, number of officers carrying firearms and how much ammunition it uses, according Brian Baluta, a spokesman for Amodei.

Department officials declined to provide specific information to the Sun regarding details of the ammunition purchase request. “We want to limit the amount of information any bad guys might have about our protection capabilities,” said Rose Davis, a Bureau of Reclamation spokeswoman.

A review of federal procurement records by the Sun shows that the Bureau of Reclamation, best known for its management of Western waterways and dams, solicited bids in June for 41,600 rounds of hollow-point ammunition along with 10,400 rounds of shotgun ammunition.

The agency declined to say how many armed officers work at Hoover Dam and how many security threats it faces each year, but according to a 2008 review of federal law enforcement, the bureau had 21 officers patrolling Hoover Dam.

The bureau works in conjunction on Hoover Dam security with the Department of Homeland Security, Metro Police and other law enforcement officials. The bureau’s armed officers are “there for the protection of employees, visitors and the dam,” Davis said.

According to Davis, funds for the ammunition are drawn from revenues generated by utility companies that buy electricity from Hoover Dam, rather than from tax dollars.

The department’s request is likely to stir debate over the stockpiling of weapons and ammunition by nonmilitary federal agencies. The BLM faced questions last year over its role in an armed standoff with militia members supporting Nevada rancher Cliven Bundy’s refusal to pay more than a million dollars in back taxes and grazing fees.

Two months later, Amodei was one of 17 GOP congressmen to sponsor a bill that would have prevented certain agencies, like the Bureau of Reclamation, from using or purchasing weapons. That bill failed to pass.

The Bureau of Reclamation is not the only federal agency to have amassed weapons and ammunition — or to have faced controversy. In 2013, the Department of Homeland Security put out a bid to purchase more than 1 billion rounds of ammunition for its more than 100,000 law enforcement officials. That same year, agents from the Environmental Protection Agency inspected the offices of a mining company in Alaska while wearing body armor and carrying M16 rifles and shotguns, leading to an investigation by House lawmakers.

The most recent order is not the first time the Bureau of Reclamation has purchased large quantities of ammunition. Its last requisition was in 2013, according to federal purchasing records. Since 2008, the agency made at least 19 requests for ammunition at offices nationwide.

Hoover Dam’s most recent publicized threat was in 2012, when a man drove his truck past a security checkpoint, prompting an hourlong standoff with officials. He was later found to be unarmed.