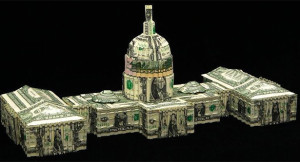 (opednews.com) Many think our government is for sale. However, by taking a look at the facts below provided by the Open Secrets, it is easy to understand where they are coming from. Looking back at Friday the 12th, the House voted on Trade Promotion Authority (TPA), the controversial bill that gives power to the executive branch to negotiate treaties. TPA limit’s Congress’ ability to better a trade deal by subjecting members of Congress to 90 days of reviewing the trade agreement, prohibiting any amendments on the implementing legislation, and giving them an up or down vote. TPA passed with a mere 219-211 vote with only 218 needed to pass. The real shocker comes from the amount of money each Representative received for a yes vote. In total, $197,869,145 was given to Representatives for a yes vote where as $23,065,231 was given in opposition.

We also have other hero stories.

Those numbers are absolutely staggering. Corporations are taking control of what policies are approved or blocked in the U.S. We cannot sit around while corporations decide what is “good” for America or not! This is a democracy, not a plutocracy! Contact your representatives and let them know that you do not want them to vote in favor of TPA!