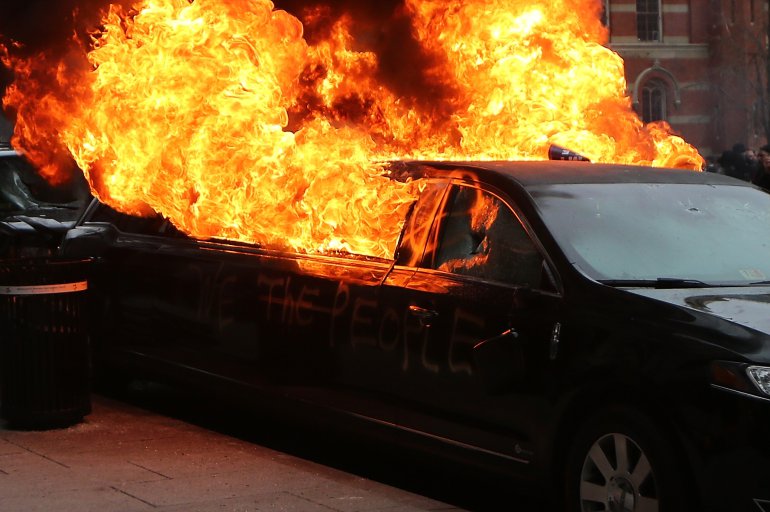 Ashraf, the owner of Nationwide Chauffeur Services, told  Red Alert Politics that he is still coping with the loss, as his company is now in debt for $70,000, his insurance doesn’t cover riots; most auto insurance companies probably don’t cover riots.

Additionally, Ashraf detailed that his employee Luis Villarroel was injured in the riots when protesters threw bricks,  stones, and whatever they could find at the driver who was apparently in the vehicle. He ultimately ended up in the hospital for cuts from the broken glass. Pictures were also provided to Red Alert Politics, which shows that the man’s hand was cut up and bloody.

Ashraf also spoke about what he thinks of the new President of the United States, Donald Trump; he noted that he has a different point of view than him and is not a supporter.

“I have a different point of view,” Ashraf told Red Alert. “I did not agree with many of the things he said, but that still does not give me the right to go and affect someone’s livelihood.”

Despite not being a Trump supporter, anti-Trump anarchists still burned his limousine

He expanded, talking about the nature of protest and how he felt that we as a country didn’t need to go down this violent route of riots to express our differences.

“I really don’t think we need to take this violent route,” Ashraf said, speaking about the protest that turned into riots.

It’s incredibly ironic that the same people who are protesting Trump for a number of reasons – including his proposed plan to ban Muslim immigrants – had a hand in destroying a Muslim immigrant’s limousine.