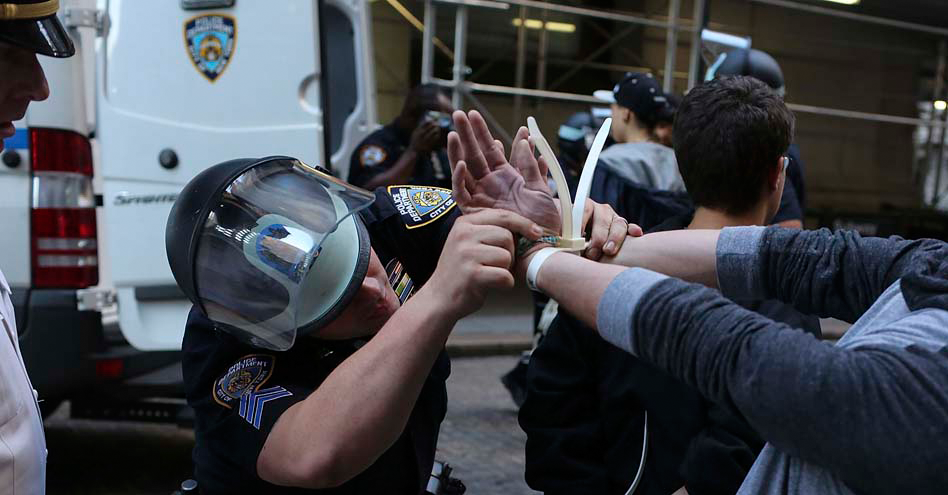 If Republicans in Arizona’s senate have their way, police in that state could soon have the power to seize assets and property from protesters, the Arizona Capitol Times reports.

From a February 22 article:

Claiming people are being paid to riot, Republican state senators voted Wednesday to give police new power to arrest anyone who is involved in a peaceful demonstration that may turn bad — even before anything actually happened.

SB1142 expands the state’s racketeering laws, now aimed at organized crime, to also include rioting. And it redefines what constitutes rioting to include actions that result in damage to the property of others.

But the real heart of the legislation is what Democrats say is the guilt by association — and giving the government the right to criminally prosecute and seize the assets of everyone who planned a protest and everyone who participated.

Essentially, under this bill cops could arrest anyone at a demonstration that suddenly turns violent, however peaceful it might’ve started. They would even be able to target people who had nothing to do the property damage.

Highlighting that certain senate Democrats “noted the obvious: that public protests often involve different groups with varying tactics,” he pointed out that, hypothetically, peaceful protesters could be held responsible “for the violent actions of a different faction or of individuals who act out while others remain calm.”

But it gets even worse than that, as the Arizona Capitol Times pointed out Wednesday: “By including rioting in racketeering laws, it actually permits police to arrest those who are planning events.”

Planning events. Meaning cops will have the authority to investigate activists before the demonstrations even take place.

This is what Republican state senator Sonny Borrelli, the author of S.B. 1142, called targeting “the money source” in his defense of the bill before the committee meeting last week.

Citing the conservative notion that a legion of privately funded progressive protesters is clogging up governmental works all over the country, Borrelli said the law would go after those “paid to go out and create this damage.”

And if it takes cops infiltrating political groups on the taxpayers’ dime — on the razor-thin pretext of maybe preventing a potentially violent demonstration down the road — so be it, at least according to Republican attitudes in Arizona.

“I should certainly hope that our law enforcement people have some undercover people there,” state senator John Kavanagh said, referring to police authority under S.B. 1142 to investigate political demonstrations while in the planning stages.

“Wouldn’t you rather stop a riot before it starts?” he also said.

The bigger issue at play, as noted by the Arizona Capitol Times, is the chilling effect such legislation would have on free speech. After all, if a person could get arrested for simply participating in a political demonstration — regardless of their own peaceful motives and actions — that person might decline to get involved.

S.B. 1142 would actively enforce the notion of guilt by association. If would punish the innocent who are wishing only to exercise their right of free expression, all because of the actions of criminals.

Such legislation would further complicate an environment of political unrest, made of both positive and negative forces, as State Senator Martin Quezada, Democrat out of Phoenix, highlighted Wednesday:

This article first appeared on TheDailySheeple.com.