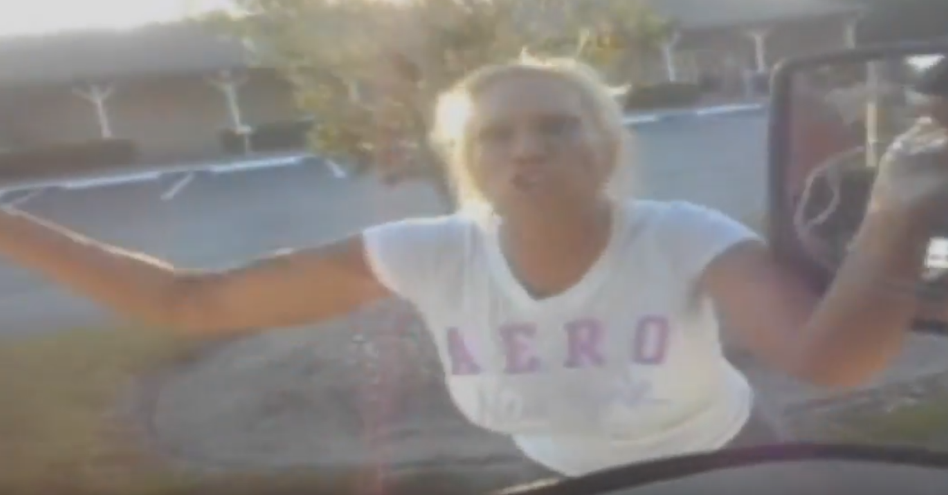 Article Via: The Free Thought Project

Orange County, FL — If your vehicle was being towed for being illegally parked and you pulled a gun on the tow truck driver and demanded he put it down, you would be arrested for assault with a deadly weapon. However, if you do this as a police officer, you get a vacation.

Deputy Tracy Weiss with the Orange County Sheriff’s Department was given a slap on the wrist this week after begin caught on video accosting a tow truck driver.

The incident happened in April of last year. However, the ‘investigation’ wasn’t wrapped up until this month. Investigators determined that Weiss flashed her badge and grabbed her gun when she demanded that the tow truck driver drop her car that was being towed for parking illegally.

Weiss told investigators that she grabbed her gun because she didn’t know if the driver would be “aggressive.” However, the only one aggressive in the video below is Weiss.

Last April, Weiss was parked at the Starlight Ranch retirement community on a sidewalk. The community has a policy that forbids vehicles to block the sidewalk.

When Weiss noticed that her truck was being towed, she jumped into another vehicle and then drove the wrong way down a one-way street to block the driver in who had towed her car.

When she exits the vehicle, according to the tow truck driver, she had her gun drawn. When he saw the gun, the driver pulled out his camera phone and began to record.

“You need to put your gun away,” replied the driver.

“You see a gun?” Weiss asked, acting as if she didn’t have one once she saw the camera.

“Yes. It’s in your pocket,” the driver said.

“I’m not going to jail,” the driver responded.

“Whatever,” Weiss said before storming off to wait for backup.

When deputies arrived, they confirmed that Weiss did, in fact, have a gun.

“She had a gun in her hand pointed at me,” said the driver.

The deputies refused to arrest the driver and allowed him to tow the truck as he was well within the law to do so. Also, instead of the normal impound fee of $62.50, Weiss had to pay double as she held the driver up for more than 15 minutes.

However, Weiss was not arrested.

For admittedly assaulting a man with a deadly weapon and abusing her authority, Weiss was later facing aggravated assault charges. However, likely due to her status as a cop, the state attorney’s office declined to prosecute her.

One would think that a cop, would, at the very least, be fired for such abuse of authority and misconduct — especially after it was captured on video. However, one would be wrong. It was announced by the department this week that Weiss received a 40-hour suspension which was merely docked from her vacation time.

“The penalty that was given to her, I find it, at this point, to be ridiculous,” said the driver, who asked not to be identified.

According to WFTV 9, the driver said he has quit working in Orange County because of the incident.

“I just feel sorry for whoever else is going to come across her path,” he said.

This is Weiss’ second such incident in which she’s been suspended. Her disciplinary record revealed she was suspended in 2008 for violating OCSO’s use of authority policy.

Weiss was suspended for 21 hours without pay after she was accused of acting inappropriately regarding a business arrangement, the Sheriff’s Office’s said.

Below is a video that epitomizes the divide in America today that continues to grow between the police and the policed. Until officers like Weiss are actually held accountable, this divide will continue to grow.

This article first appeared on TheFreeThoughtProject.com and was authored by Matt Agorist