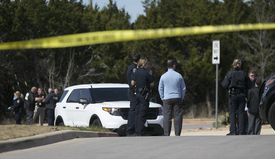 An Austin police officer who shot and killed a naked, unarmed teen last week feared for his life and was following department training at the moment he fired, his attorney told the American-Statesman Monday.

The Feb. 8 encounter between officer Geoffrey Freeman and 17-year-old David Joseph unfolded in a matter of seconds after Freeman exited his patrol car, and Joseph, who was behaving aggressively and erratically, was in “very close proximity” to Freeman, said Michael Rickman, general counsel for the Combined Law Enforcement Associations of Texas.

+Attorney: Austin officer who shot naked teen feared for his life photo
Austin police officers investigate the scene of an officer-involved shooting in the 12000 block of Natures Bend in Northeast Austin on
“When you are in fear of your life, and that it could be taken, you have the right to use the amount of force necessary to repel the threat,” Rickman said. “Everybody knows what the facts are, and this officer did what he did in accordance with the training he received from the Austin Police Department.”

Rickman said Freeman is cooperating fully with the police investigation into the shooting, which sparked an outcry from some in the community who contend Freeman’s use of lethal force was excessive. Austin police Chief Art Acevedo has said Freeman has “tough questions” to answer about his decision to fire.

Freeman is on leave with the department, which is standard practice after an officer is involved in a shooting.

+Attorney: Austin officer who shot naked teen feared for his life photo
Austin police officer Geoffrey Freeman
The police account of events is that Joseph was naked when Freeman encountered him in the 12000 block of Natures Bend in Northeast Austin. When Freeman exited his patrol car, Joseph charged at him and disobeyed commands to stop before Freeman opened fire. A recording of police and EMS scanner traffic obtained by the Statesman suggests Joseph was shot twice in the chest.

In a news conference late last week, Acevedo provided a more detailed timeline of the events that preceded the shooting. He spoke for the first time about the 911 calls leading up to the incident and noted that Freeman had called for backup minutes before his encounter with Joseph.

Last week, Acevedo said he hopes the investigation into the shooting will be completed within 30 days — an expedited timeline for most fatal police shootings.
Acevedo also met with several community advocates about the shooting, promising an impartial and full review of the shooting. He also defended the department’s policies, which have been reviewed in recent years by the U.S. Department of Justice.

Freeman and Joseph are both African-American.

“Officer Freeman needs to have a fair chance to defend himself on the facts,” Rickman said. “He is completely torn up over this.”

Acevedo: Officer who shot naked teen has ‘tough questions’ to answer
The Austin Police Association Tuesday will have a news conference to discuss several issues arising from the shooting, including what union officials said included being short-staffed and having a lack of hand-to-hand use-of-force training.